It started with stereotypes, was reinforced with marketing and now permeates a number of social norms. 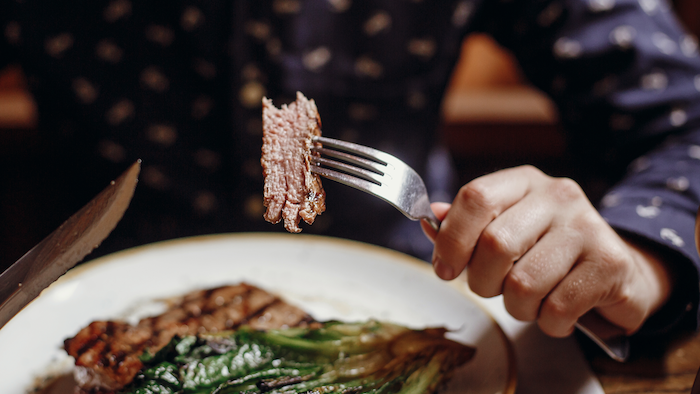 (THE CONVERSATION) When was it decided that women prefer some types of food – yogurt with fruit, salads and white wine – while men are supposed to gravitate to chili, steak and bacon? In my new book, American Cuisine: And How It Got This Way, I show how the idea that women don’t want red meat and prefer salads and sweets didn’t just spring up spontaneously.

Beginning in the late 19th century, a steady stream of dietary advice, corporate advertising and magazine articles created a division between male and female tastes that, for more than a century, has shaped everything from dinner plans to menu designs.

Before the Civil War, the whole family ate the same things together. The era’s best-selling household manuals and cookbooks never indicated that husbands had special tastes that women should indulge. Even though “women’s restaurants” – spaces set apart for ladies to dine unaccompanied by men – were commonplace, they nonetheless served the same dishes as the men’s dining room: offal, calf’s heads, turtles and roast meat.

Beginning in the 1870s, shifting social norms – like the entry of women into the workplace – gave women more opportunities to dine without men and in the company of female friends or co-workers. As more women spent time outside of the home, however, they were still expected to congregate in gender-specific places.

Chain restaurants geared toward women, such as Schrafft’s, proliferated. They created alcohol-free safe spaces for women to lunch without experiencing the rowdiness of workingmen’s cafés or free-lunch bars, where patrons could get a free midday meal as long as they bought a beer (or two or three).

It was during this period that the notion that some foods were more appropriate for women started to emerge. Magazines and newspaper advice columns identified fish and white meat with minimal sauce, as well as new products like packaged cottage cheese, as “female foods.” And of course, there were desserts and sweets, which women, supposedly, couldn’t resist.

You could see this shift reflected in old Schrafft’s menus: a list of light main courses, accompanied by elaborate desserts with ice cream, cake or whipped cream. Many menus featured more desserts than entrees.

At the same time, self-appointed men’s advocates complained that women were inordinately fond of the very types of decorative foods being marketed to them. In 1934, for example, a male writer named Leone B. Moates wrote an article in House and Garden scolding wives for serving their husbands “a bit of fluff like marshmallow-date whip.”

Save these “dainties” for ladies’ lunches, he implored, and serve your husbands the hearty food they crave: goulash, chili or corned beef hash with poached eggs.

Pleasing the Tastes of Men

Writers like Moates weren’t the only ones exhorting women to prioritize their husbands. The 20th century saw a proliferation of cookbooks telling women to give up their favorite foods and instead focus on pleasing their boyfriends or husbands. The central thread running through these titles was that if women failed to satisfy their husbands’ appetites, their men would stray.

You could see this in mid-century ads, like the one showing an irritated husband saying “Mother never ran out of Kellogg’s Corn Flakes.” But this fear was exploited as far back as 1872, which saw the publication of a cookbook titled “How to Keep a Husband, or Culinary Tactics.” One of the most successful cookbooks, “‘The Settlement’ Cook Book,” first published in 1903, was subtitled “The Way to a Man’s Heart.”

It was joined by recipe collections like 1917’s “A Thousand Ways to Please a Husband” and 1925’s “Feed the Brute!” This sort of marketing clearly had an effect. In the 1920s, one woman wrote to General Mills’ fictional spokeswoman, “Betty Crocker,” expressing fear that her neighbor was going to “capture” her husband with her fudge cake.

Just as women were being told they needed to focus on their husbands’ taste buds over their own – and be excellent cooks, to boot – men were also saying that they didn’t want their wives to be single-mindedly devoted to the kitchen. As Frank Shattuck, the founder of Schrafft’s, observed in the 1920s, a young man contemplating marriage is looking for a girl who is a “good sport.” A husband doesn’t want to come home to a bedraggled wife who has spent all day at the stove, he noted. Yes, he wants a good cook; but he also wants an attractive, “fun” companion.

It was an almost impossible ideal – and advertisers quickly capitalized on the insecurities created by the dual pressure wives felt to please their husbands without looking like they’d worked too hard doing so. A 1950 brochure for a cooking appliance company depicts a woman wearing a low-cut dress and pearls showing her appreciative husband what’s in the oven for dinner.

The woman in the ad – thanks to her new, modern oven – was able to please her husband’s palate without breaking a sweat.

The microwave encouraged alternatives to the traditional, sit-down dinner. The women’s movement destroyed lady-centered luncheonettes like Schrafft’s and upended the image of the happy housewife preparing her condensed soup casseroles or Chicken Yum Yum. Yet as food historians Laura Shapiro and Harvey Levenstein have noted, despite these social changes, the depiction of male and female tastes in advertising has remained surprisingly consistent, even as some new ingredients and foods have entered the mix.

Kale, quinoa and other healthy food fads are gendered as “female.” Barbecue, bourbon and “adventurous foods,” on the other hand, are the domain of men. A New York Times article from 2007 noted the trend of young women on first dates ordering steak. But this wasn’t some expression of gender equality or an outright rejection of food stereotyping.

Instead, “meat is strategy,” as the author put it. It was meant to signal that women weren’t obsessed with their health or their diet – a way to reassure men that, should a relationship flower, their girlfriends won’t start lecturing them about what they should eat.

Even in the 21st century, echoes of cookbooks like “The Way to a Man’s Heart” resound – a sign that it will take a lot more work to get rid of the fiction that some foods are for men, while others are for women.

This article is republished from The Conversation under a Creative Commons license. Read the original article here: http://theconversation.com/how-steak-became-manly-and-salads-became-feminine-124147.