The region has seen less than 1.5" of rain this year. 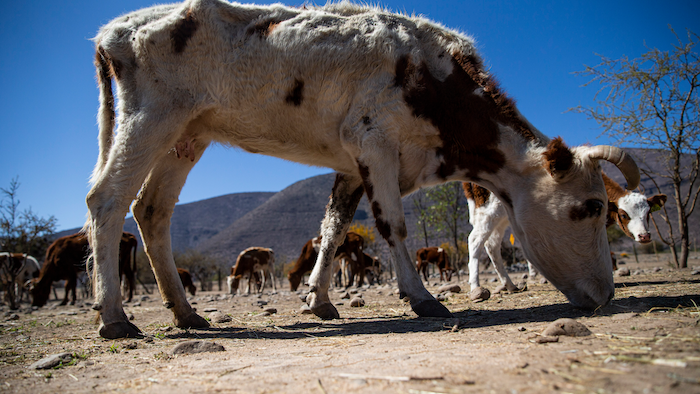 PUTAENDO, Chile (AP) — Alfredo Estay stands amid a dwindling herd of cattle, near a dying calf and a malnourished cow unable to stand on its feet due to Chile's worst drought in more than half a century. From the region of Coquimbo in the north of Chile to Maule in the south, more than 30,000 head of livestock have died of hunger or thirst, and crops have been lost for lack of rain, according to the agriculture ministry.

Estay has been left with just 80 cows and a handful of calves out of the 180 he had before the drought bit. "I don't count them because every day there's a death," he said. "I can't take any more. I don't have anything to feed them, so the best thing would be to take them to the (barren mountains so they die there (faster),' said Estay, who lives in Putaendo, about 65 miles northwest of Santiago, the capital. His five-acre peach orchard is barren as well.

His neighbor, Aníbal Henríquez, said he had lost 80 of his 150 cows. "There have been bad years, but it rained a little and grass grew," he said. "Not now."

Freddy Moreno, spokesman for the local ranchers' association, said only 1.46 inches of rain has fallen this year. The drought also has affected fruit and grain producers in the south and beekeepers in the center of the country.

Drought struck hard last year in neighboring Argentina, and scarcity of rain has been blamed for aggravating vast fires buring across forests and croplands.