The salmon rebound comes after three years of extremely low catches that resulted from poor ocean conditions and a five-year drought. 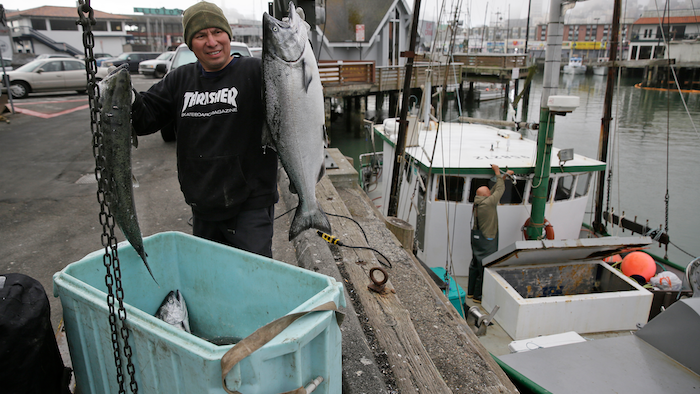 SAN FRANCISCO (AP) — Trolling off the California coast, Sarah Bates leans over the side of her boat and pulls out a long, silvery fish prized by anglers and seafood lovers: wild king salmon. Reeling in a fish "feels good every time," but this year has been surprisingly good, said Bates, a commercial troller based in San Francisco.

Bates and other California fishermen are reporting one of the best salmon fishing seasons in years, thanks to heavy rain and snow that ended the state's historic drought. It's a sharp reversal for chinook salmon, also known as king salmon, an iconic species that helps sustain many Pacific Coast fishing communities.

Commercial salmon catches have surpassed official preseason forecasts by about 50 percent, said Kandice Morgenstern, a marine scientist with the California Department of Fish and Wildlife. Harvests have been particularly strong in Morro Bay, Monterey and San Francisco, but weaker along California's northern coast. "We're really surprised to be seeing this many fish being landed so far this season," Morgenstern said.

The salmon rebound comes after three years of extremely low catches that resulted from poor ocean conditions and California's five-year drought, which drained the state's rivers and reservoirs. Over the past several years, regulators imposed severe fishing restrictions to protect chinook salmon, and officials declared federal fishery disasters in 2018 to assist fishing communities in California, Oregon and Washington.

This year's adult salmon are the first class to benefit from record rainfall that filled California rivers and streams in early 2017, making it easier for juvenile chinook to migrate to the Pacific Ocean, where they grow into full-size fish. Chinook salmon are also being helped by improved ocean conditions that have produced an abundance of anchovies, krill and other feed. Several years ago, an El Nino event brought unusually warm water to the Pacific Coast and disrupted the marine ecosystem.

"For the salmon fishermen who've been dealing with disaster for so long, this is an incredible boon to their livelihoods," said Noah Oppenheim, who heads the Pacific Coast Federation of Fishermen's Associations. The strong salmon season, which typically runs from May to October, is positive environmental news at a time of growing anxiety about climate change. A United Nations report released this month warns that global warming threatens food supplies worldwide.

Morgenstern says climate change is creating greater fluctuations in ocean and river conditions, making chinook fisheries "less stable, less predictable and more challenging for fishery managers." Most of the chinook salmon now being caught come from the Sacramento River and its tributaries, where they spawn. Many were raised in state-run hatcheries then released into rivers to swim to the ocean. Harvests of chinook from rivers farther north have not been strong.

For consumers, the bountiful harvest has driven down wild salmon prices to $15 to $20 per pound, compared with $30 to $35 per pound in recent years. Fishermen are making up for the difference by catching more fish. "The market is dictating right now that there's a lot of salmon, so the customers don't have to pay as much," said Gordon Drysdale, culinary director at Scoma's, a seafood restaurant at Fisherman's Wharf in San Francisco.

The wharf is one of many California fishing communities now benefiting from the salmon boom. Pier 45, where boats unload their fish, hasn't been this busy in many years, said Larry Collins, who runs the San Francisco Community Fishing Association. "This year started out with a bang, and it's just kept banging the whole time," Collins said. "We're all really excited and happy the fish showed up."

On a recent morning, commercial fisherman Brand Little, who sells to customers in the Lake Tahoe area, returned from four days of fishing with nearly 200 salmon weighing more than 2,000 pounds. "Best trip of the season," Little said. "It's been a long time coming."

The salmon boom is also welcomed by sport fishermen and the boat operators who take them out to the ocean. "When the fish are biting, it's always good for business for us," said Mike Rescino, who runs a charter boat. "When the people see the big reports, they're going to come out and go fishing with us."