The experiment is intended to stave off inflation. 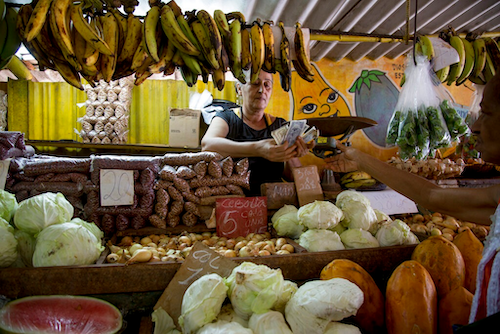 HAVANA (AP) — The Cuban government is capping prices for food and beverages throughout the country in order to control the risk of inflation due to a state wage hike and stagnant productivity.

The experiment started several weeks ago in some province and it will go into effect throughout Cuba on Aug. 1, officials said.

The price cap is part of a batch of measures announced by the Cuban government that includes an increase in the salaries of more than 1 million government employees and retirees.

"History tells us that price caps aren't good; they can control an imbalance in the short-term but they're not the sustainable, long-term remedy," said economist Ricardo Torres. "Cuba's problem is of production."

Cuba is currently going through a difficult economic situation attributed to its low production and large import bills, especially for food and fuel, accompanied by the economic collapse of Venezuela, Cuba's closest ally.

"If they are going to cap prices, I think it's for the advantage of the people since if the products are a bit cheaper, they are able to consume more," said Tatiana Witnall, 50, an employee at the private cafeteria "Don Yoyo."

The Trump administration has been trying to cut back Cuba's income from sectors like tourism by prohibiting cruises to Cuba and limiting U.S. travel to the island.

The Cuban government has imposed some rationing on staples like chicken, cooking oil, rice and beans and other daily.

Cuban President Miguel Díaz Canel has faced a moribund economy since taking office in April of last year. It has not lapsed into an outright recession. Bright spots like tourism, rum and cigar sales and mining have helped sustain some growth, but not enough to appreciably raise living standards.