An auto mechanic by profession, Mark Clabaugh has been developing his Floyd County, Virginia hop yard for the past three years. 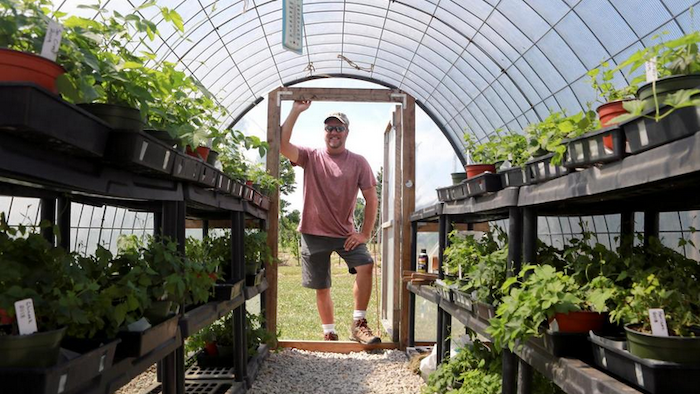 RED OAK GROVE, Va. (AP) — What started out as a few hops plants to add flavor to Mark Clabaugh's homebrew kettle has flowered into a passion to help grow the fledgling hops industry in Virginia.

An auto mechanic by profession, Clabaugh, 38, has been developing his Floyd County hop yard for the past three years. Today he's got a quarter of an acre under cultivation on a high ridge.

"Right now we're in the phase of trying to figure out what do the brewers want, how much do they want," Clabaugh said. "Then once we can determine that, we can start expanding because . . . if you don't have a market for what you're growing, you're not going to make it as a farmer."

So far, Clabaugh's had good luck with that. He's sold to area craft brewers for the past two years, including Greg Zielske, head brewer at Blacksburg's Rising Silo and Eastern Divide breweries.

"Every year he says he's going to have them again, and I say, basically, we'll buy you out," Zielske said. "Anytime you can do something different once a year, it's pretty special."

Clabaugh keeps a portion of his crop for drying. Then he and Kaleena Weeks — his partner in business and in life — use them to make soaps and Christmas ornaments for sale at area farmers markets. These value-added products make his operation more profitable, he said.

He also recently got his nursery license to sell hop plants to other growers. He said he has tested more than 20 varieties from the U.S., Great Britain, New Zealand and Japan and is working on producing the most successful for sale.

Eventually, Clabaugh said he would like to put as much as three acres of his family's farm into hops cultivation, but as producers across the state have found, it's a challenging crop to grow in the commonwealth.

One recent spring was too wet and that threatened to rot the hop plant's root system, known as the crown. This year, wind has damaged some of his bines — the vine-like body of the plant that produces the cones used for bitterness and aroma in beer.

Too much heat is bad, too. This month he had to start harvesting early to save the precious cones from a 90-plus-degree temperatures that hit Southwest Virginia.

"It's like a blast furnace. It's been drying out our hops like crazy," Clabaugh said. "You either harvest a little early and get some crop, or you wait and get no crop."

Added to the weather and disease problems common with hops, Clabaugh said, "the biggest wow is how much work's involved."

He's not the only one to come to that conclusion.

Vigorous perennials related to hemp, hops plants grow up to 25 feet in one season. In late summer, they produce an acidic flower bud, or cone, that when added to beer imparts a refreshing astringent quality and helps preserve the brews. Hops were a major crop in colonial Virginia, but production later shifted to other parts of the country.

Today more than 200 craft brewers across Virginia are clamoring for ingredients and flavors that can set them apart in a crowded beer market. That is creating an increasing demand for regional hops from which Virginia growers hope to profit.

Many have jumped in — and soon jumped out again.

In 2015, membership in the Old Dominion Hops Co-op reached a high of 120 growers, said Randy Green of the organization's board of directors. But today that number has fallen to about 90, he said, and he characterized about 45 as active.

"We've seen a bit of a downward trend because people get into this and then realize, 'Ah, this is a lot of work; I can't just do this on Saturday and Sunday,' " Green said. "I know of at least six growers in Nelson, Albemarle and Augusta (counties) who have gotten out because they're just overwhelmed by it."

There are many challenges to developing an industry here.

First, hops typically grow less well in Virginia than in other parts of the country that have longer summer days and less humidity.

U.S. commercial production is centered in the Pacific Northwest, where 57,339 acres are expected to be harvested this year, according to the U.S. Department of Agriculture. Washington state alone, with 41,263 acres planted for harvest, accounts for 72% of the total U.S. acreage. Idaho and Oregon are also major producers.

Also, Mid-Atlantic hops yields, even from mature plants, lag far behind the Pacific Northwest. There, according to the national Hop Growers of America, yields average about 2,000 pounds of dried hop cones per acre on mature hop yards.

A 2018 grower survey conducted by Virginia Tech and Virginia Cooperative Extension found at least 20 operations producing hops commercially in Old Dominion. Together they grew 9,300 plants from a dozen different varieties, which yielded 690 pounds of dry hops.

There also are gaps in knowledge that are limiting the industry. The plants are not widely studied, and there isn't yet enough regional information to help growers troubleshoot pests and diseases, predict nutritional needs and develop the best cultivation techniques.

So Holly Scoggins, a professor of plant sciences at Virginia Tech, set out to answer some of those questions in 2015.

With grant support from the Virginia Agricultural Council and Virginia Department of Agriculture and Consumer Services and help from Virginia Cooperative Extension, Scoggins established a half-acre hops research yard in Blacksburg. She and her students have been testing a range of hops cultivars to help growers choose the most productive, less troublesome varieties.

They have looked at fertilizer and water requirements, disease and pest problems and compared yields from different varieties. The data so far have confirmed why most commercial hops production moved to other areas of the country.

"Due to climate, shorter day length, and pest and disease pressure, hops are a very challenging crop for the Mid-Atlantic," according to Scoggins' 2017 report.

But, the testing has ruled out some plant varieties that underperform and pointed to ones with more promise.

"Several cultivars, including Cascade, Comet, Crystal, Nugget, and Chinook (part of a separate fertilizer rate study), have demonstrated reasonably good disease resistance and yield potential in our location," the report stated. "The yields to date have been relatively modest when compared to established yards in the (Pacific Northwest); however, they are consistent with other reports from the Eastern portion of the United States."

"We pulled the poor performers and replanted with some newer (to us) cultivars; so we're looking forward to next year's harvest," Scoggins wrote in an email.

"It's been an interesting time for hops. Unusual weather patterns for the past two years have impacted yield," Scoggins wrote. "But with each challenge, we learn a little more, so we can communicate that information to our growers and Extension partners."

There are other hurdles for hops to clear.

Because the industry is so small in Virginia, it lacks crucial infrastructure to process the state's crop.

That means that for most of the year, even small craft brew operations must rely on dried hops from big production states.

"We're limited in our marketing to what we call fresh hops, or wet hops," said Randy Green. "Literally, we harvest them in the morning and we take them to a brewer that afternoon and they brew with them right away."

In the Pacific Northwest, easily accessible processing equipment and facilities allow efficient drying, grinding and pelletizing of hops. That allows large-scale production of consistent, shelf-stable products that can be shipped anywhere year round.

So far, Virginia's hops industry hasn't created a big enough market to make such facilities a good financial bet. And, Green said, even equipment that would mechanize the growing and harvesting processes is hard to come by here.

That leaves growers doing the labor themselves.

That makes developing the industry challenging. The average hops yard in the commonwealth is between one and five acres, Green said. His own Nelson County operation, Green Diamond Hopyard, is about an acre.

But the outlook may be changing.

"There's one hop processing facility that's up and running in Loudoun County, and there's another one under development in the Abingdon area," Green said.

"If we can get two or three of these facilities scattered around the state within a three or four hour drive of our hop yards, then . . . we have a way of stabilizing the crop, stabilizing the product, so that we could sell it throughout the year rather than just mid-August to mid-September."

Still, there is demand for fresh Virginia hops. Green said he's sold to several brewers in and around Nelson County.

In fact, a seasonal, local product is a powerful marketing tool in craft beer.

Greg Zielske, the Blacksburg brewer, sees local hops as integral to a strong craft brew economy, and he has implemented brewing equipment and even processes to make the most of it.

Most commercial brewing equipment is designed to use pelletized hops, which won't gum up the systems that pump the beer from tank to tank. But Zielske wanted to use wet, whole cones from local growers like Clabaugh.

"Fresh, wet hops are the only ones that give you that bright, fresh, grassy green flavor," Zielske said.

So at Eastern Divide Brewing Company in Blacksburg, he installed a device called a hopback — essentially a big tea strainer — that allows him to use whole cones without clogging up the equipment.