The gravity fed technique allows the grapes, juice and wine to flow downward during the fermentation process, without the use of pumps or mechanical force. 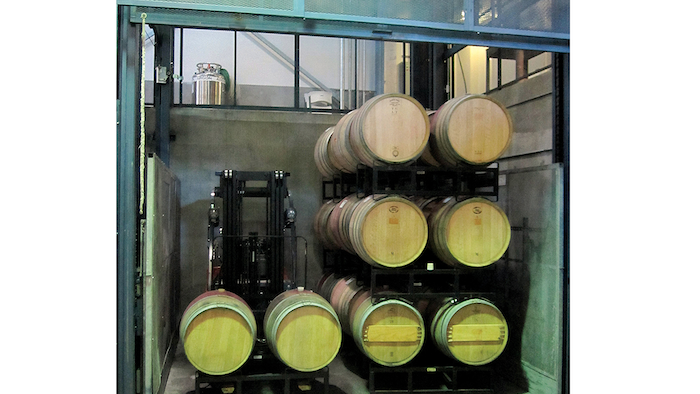 Joseph Phelps Vineyards (JPV) has long been known worldwide for its Insignia label of wines, featuring a signature blend of Cabernet Sauvignon and red Bordeaux varietals. For 35 years JPV had also been making Pinot Noir and Chardonnay from its Napa Valley winery.

As the business prospered, JPV determined that the quality of its Pinot Noir and Chardonnay wines would benefit if their grapes were grown in a cooler climate. In 1999, Phelps began developing 100 acres of vineyards just outside of Freestone, California on the Sonoma Coast. The construction took two years and was completed in time for the harvest.

DW Nicholson, a PFlow dealer in Hayward, CA, consulted with the JPV owners and architects 18 months prior to the start of construction, helping specify the type, size, features and placement of the vertical reciprocating conveyor that would best support the gravity fed winemaking process. “The lift at JPV Freestone required a special engineering review to accommodate the seismic bracing needed in California, with a specific focus on the column that is not in proximity of a structural building component,” said Scott Flores, the DW Nicholson project manager.

The JPV Freestone winery, built into a carved-out area of a small mountainside, was designed to accommodate gravity flow wine making. The gravity fed technique allows the grapes, juice and wine to flow downward during the fermentation process, without the use of pumps or mechanical force common to one-level cellars. This more gentle process enables the wine to naturally extract color, flavor and tannin with minimal oxidization, resulting in a better wine.

A critical infrastructure component in the three-level facility is a PFlow F Series vertical reciprocating conveyor. It features a 20,000 lbs. lifting capacity, a 12’ x 12’ lift carriage, and a travel distance from the bottom floor to the top of just over 26’. Though the VRC is in service throughout the year, during the peak harvest season (August through November) it is in constant use for 12 to 14 hours a day.

Because the facility is built into a mountainside, the top floor is the primary entry point, and is referred to as the ground floor. Here grapes from the nearby “estate-owned” Joseph Phelps vineyards are de-stemmed and processed, then put into chutes where they fall into tanks on the second level to begin the fermentation process. The grape juice that becomes wine is gradually transferred via gravity through a set of stainless steel hard lines to the barrels on the third floor, where it is then stored during the barrel aging process.

Other than gravity, all other vertical motion involved in the winemaking process is provided by the PFlow four-post VRC. Materials moved up and down throughout the season include a fork lift, full and empty barrels and crates, vats, hoses and press pans with pomace to be disposed of after the grapes are processed. Once the wine is bottled the VRC can fit nine pallets of finished cases.

Access to each building level is available from the outside along a steep service road built into the mountainside. Vehicle travel along the steep road is a safety concern, so loaded forklifts typically enter through the third floor loading dock, and are also moved on the VRC, usually with load on-fork.