Without a dependable supply of gas, shipments of pesticides have been cut off, equipment has become impossible to operate, and crops aren't arriving at markets. 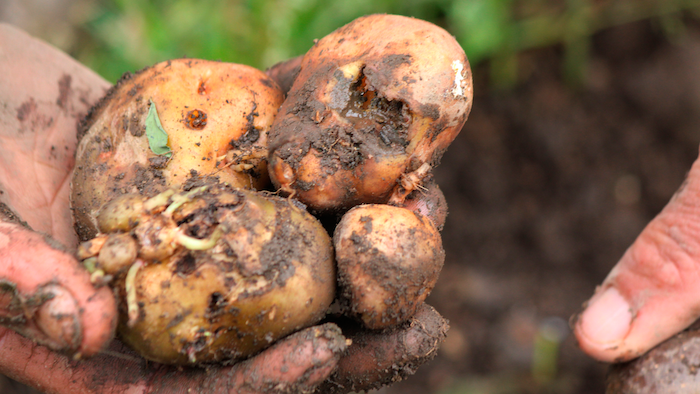 LA GRITA, Venezuela (AP) — Growing potatoes and carrots high in the wind-swept mountains of western Venezuela had always proven a challenge for Luis Villamizar. But as oil production in the South American country has collapsed under years of mismanagement and U.S. sanctions, many in the industry are confronting another hardship: Fuel shortages.

"Nobody's going to eat this. It's a loss for sure," said Villamizar, 53, as he dug up potatoes darkened with spots from a damaging infestation. "Who's going to buy these? This won't do." He's not alone. Across Venezuela, crops are spoiling in the fields — at a time of unprecedented hunger — as farmers become the latest casualty of the nation's deepening crisis.

Without a dependable supply of gasoline, critical shipments of pesticides have been entirely cut off, basic equipment has become impossible to operate, field workers cannot be bussed in and crops aren't arriving at markets — further jeopardizing an already shaky sector in a country that has seen a whopping 10% of the population emigrate.

Oil output has reached record lows, with state run company PDVSA estimated to be producing at 10 to 15 percent of its capacity. Gasoline is dirt cheap at filling stations, but hard to find — driving the black market price for a 5.3-gallon container up to $100 in remote mountain communities. Many motorists have also grown accustomed to waiting days to fill up their cars or doing without any at all.

Critics blame the downfall on corruption after two decades of socialist rule, while embattled President Nicolás Maduro blames U.S. sanctions that were implemented against PDVSA this year to pressure him from office and put opposition leader Juan Guaidó in charge.

In the middle are the nation's farmers.

While the nation boasts the world's largest reserves of oil, agriculture and related industries in Venezuela still account for a critical sliver of the country's GDP, which has shrunk by more than 70 percent since 2012. In rural places like the western state of Tachira, many manage to eke out livelihoods by tending to crops such as potatoes, carrots, onions, tomatoes and peppers.

The lack of fuel is driving the industry toward collapse.

Robert Maldonado, a sweet pepper famer and outspoken community leader, represents roughly 1,500 farmers across the rural stretch traversed by the Andes, where the highest peak rises to nearly 12,800 feet (3,900 meters) above sea level. In the past, produce ranging from cabbage to bananas was sent to markets and kitchens across Venezuela.

These days, Maldonado says the price of fuel has eaten up profits and made it impossible for farmers to feed themselves — let alone supply a country where hunger and hyperinflation run rampant. According to survey results published by three of the country's most prominent universities, six in 10 Venezuelans said they lost weight, an average of 24 pounds, between 2017 and 2018. Last year, inflation topped one million percent.

"We're quite worried that in three or four months the production will collapse by more than half," Maldonado said. Ricardo Hausmann, a Harvard University economist and former Venezuelan planning minister who is now an opposition figure, estimates that Venezuela's farming output is down 90 percent from its 2005-2007 average, with fuel shortages adding to the blow.

"The planted area is the smallest we've seen in decades," he said, calling it a "systemic collapse" of a supply chain for the sector — including shortages of seed, fertilizer and spare parts for tractors.

Before the oil boom started in Venezuela nearly a century ago, agriculture, forestry, and fishing made up more than 50 percent of GDP. In the 1930s farms provided 60 percent of the nation's jobs. This landscape began to dramatically change in the 1970s as the petro state took off, and today agriculture makes up a smaller portion of the economy than in any other country in Latin America. As farms declined, the government used its oil windfall to import food.

In the years following the 2010 government takeover of private agricultural company Agroislena, farmers had hunted for everything from seeds to pesticides — or even traveled to neighboring Colombia to secure supplies — in order to sustain production.

Rarely though, had crops spoiled, tractors sat idle and fields left completely fallow. Villamizar, who has a tanned face and rough hands from years of toiling outside, still farms a small patch of land in the rugged mountains his family has tended for generations and said his last harvest of fourteen 132-pound potato sacks rotted before he could send it into town.

Fellow farmer Hauchy Pereira estimated he would lose six tons of onions since the transportation of his seedlings from greenhouses to open fields was delayed. Pereira said a farming collective overseen by a general had given him a pass to fill up his truck in two months' time, but his onion sprouts were already wilting.

"If you have the harvest and there's no gas, you can't sell it," the 34-year-old said. "There is no way to transport it without fuel."