He lambasted Walmart leaders including its CEO on Wednesday for paying workers what he believes are "starvation wages." 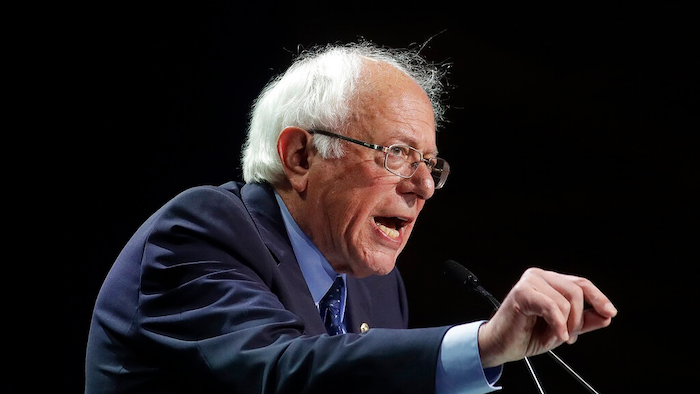 The Vermont senator and 2020 Democratic presidential contender lambasted Walmart leaders including its CEO on Wednesday for paying workers what he believes are "starvation wages" and introduced a shareholder proposal that calls for hourly associates to have a seat on the company's board.

During a brief address at the company's annual shareholders' meeting held near its headquarters in Rogers, Arkansas, Sanders called on Walmart to pay its hourly workers at least $15 per hour. Sanders was invited by Walmart worker Carolyn Davis, who is a member of a labor backed-group called United for Respect, to speak in support of the resolution.

"Frankly, the American people are sick and tired of subsidizing some of the greed of some of the largest corporations in this country," he said in his three-minute address.

The Walmart board also faced a shareholder proposal to strengthen its sexual harassment procedures, filed by United for Respect. It calls for formalizing the board's oversight responsibility, aligning senior executive compensation incentives, and it urged the company to report to shareholders by the end of the calendar year on any actions it's taken. The nation's largest private employer says such a proposal is unnecessary and says it has strong procedures and training programs in place.

With Walmart's founder's descendants owning about 50% of the stock, the proposals don't have any chance of passing. Still, it's the latest pressure that Walmart and other corporations are facing to do right by its workers.

Sanders has a history of blasting corporations from Walmart to McDonald's and Amazon.

At McDonald's shareholders' meeting in late May, presidential candidates including Sanders as well as labor groups called on the fast food chain to increase wages and improve workplace policies on sexual harassment.

Walmart, based in Bentonville, Arkansas, raised its starting pay to $11 an hour in early 2018 but still lags behind its other competitors. Late last year, Amazon jumped ahead of many rivals by raising its minimum wage for U.S. workers to $15 an hour. That pay hike was not universally praised by all workers, who said the company cut two employee benefits as well: monthly bonuses and the chance to own some of Amazon's sky-rocketing stock. Amazon did make some adjustments afterward to ensure workers were getting a raise.

Target and Walmart have increased starting wages for workers over the past few years as the job market has grown hotter and people could find better pay and benefits elsewhere. Target Corp. is raising the minimum hourly wage by a dollar in June to $13 per hour, the third pay hike in less than two years. The Minneapolis retailer has said it plans to raise starting hourly wages to $15 by the end of 2020.

Walmart has defended its record, noting it has increased starting wages by more than 50% in the last four years. It currently has an average hourly total compensation of more than $17.50. It touts benefits like advanced job training and paid time off. Earlier this week, Walmart said it was extending its debt-free college benefits to high schoolers. That includes free college SAT and ACT prep for workers in high school.

Penner noted there are serious challenges facing the country and that companies need to work together.

"Walmart is doing its part to address these challenges," he added.

The proposal to push for hourly associates to get a seat on the board comes as labor-backed groups believe that corporate decision making is fundamentally flawed.

In March, 19-year Walmart worker Cyndi Murray joined Sen. Tammy Baldwin in Washington to testify in support of a bill that would attempt to give workers a say in how their company's profits are spent. The act would require public companies to give workers the right to directly elect one-third of their company's board of directors.

Last year, Walmart Inc. for the first time separated its annual shareholder meeting into two: the formal business meeting and the employee celebration. The employee rally, which will feature the usual lineup of celebrities and lots of entertainment, will be held Friday at the Bud Walton arena at the University of Arkansas campus.