Whiskey producers feeling the pain from the Trump administration's trade disputes have gotten a shot of relief. 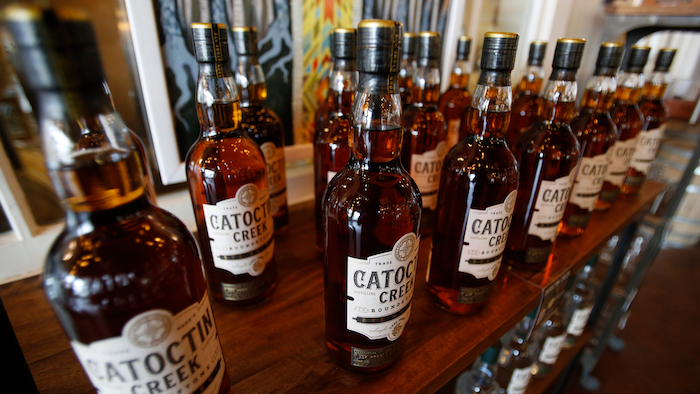 LOUISVILLE, Ky. (AP) — American whiskey producers feeling the pain from the Trump administration's trade disputes have gotten a shot of relief with an agreement that will end retaliatory tariffs that Canada and Mexico slapped on whiskey and other U.S. products.

The whiskey industry hailed the arrangement to ease trade tensions among the North American allies and said it hopes it's the first of several rounds of good news on the trade front. Distillers have suffered shrinking exports since the last half of 2018 due to tariffs in some key markets.

President Donald Trump last Friday lifted import taxes on Canadian and Mexican steel and aluminum and delayed auto tariffs that would have hurt Japan and Europe. In return, the Canadians and Mexicans agreed to scrap their retaliatory tariffs on U.S. goods, including American whiskey. But U.S. whiskey makers still face significant trade hurdles in the European Union, the industry's biggest export market.

"We hope the U.S. and our trading partners can build on this positive momentum to resolve all of the remaining retaliatory tariffs that our U.S. distilled spirits exports face, particularly the European Union's 25 percent tariff on American whiskey," Chris Swonger, president and CEO of the Distilled Spirits Council of the United States.

In 2017, total U.S. whiskey exports to Canada and Mexico were valued at $62.1 million, the council said. Canada ranks as a top 10 export market for American whiskey and in 2017, shipments north of the border were valued at $48.7 million. Since about mid-2018, Canada had imposed a retaliatory tariff of 10 percent on all U.S. whiskey imports, while Mexico had slapped a retaliatory tariff of 25 percent on U.S. whiskeys in response to the U.S. steel and aluminum tariffs, the council said.

Tariffs have become a big headache for American whiskey makers as they increasingly look overseas to expand sales. Tariffs on American whiskey remain in place in China and Turkey as well as the EU. Overall exports of bourbon, Tennessee whiskey and rye whiskey fell 11 percent during the second half of 2018 compared to the prior-year period, as the effect of tariffs started to be felt, the council said in March. The drop off was even larger in the European Union.

The focus is on the trade barriers still hurting distillers looking to sell their whiskeys in the crucial EU markets, said Eric Gregory, president of the Kentucky Distillers' Association. But he hailed the deal to remove tariffs in Canada and Mexico. "We're excited that at least this portion of the trade war looks to be coming to an end," he said Monday. "Now we hope the administration can turn its focus to the EU, which is our biggest market by far, and get us back to zero tariffs in that critical area."

American whiskey makers have been caught in the middle of the trade dispute since mid-2018, when the EU targeted American whiskey and other U.S. products in response to Trump's decision to slap tariffs on European steel and aluminum. Those duties amount to a tax, which producers can either absorb in reduced profits, or pass along to customers through higher prices — and risk losing market share in highly competitive markets.

In the EU, American whiskey exports declined 13.4 percent in the second half of 2018 when tariffs slammed the brakes on shipments, the council said in March. Kentucky spirits producers exported nearly $200 million of their products to the European Union in 2017.

Kentucky produces about 95 percent of the world's bourbon.

Large and small American distillers alike have been feeling the pain. Spirits industry giant Brown-Forman Corp., best known for its Jack Daniel's Tennessee Whiskey brand, has said that if all the tariffs stay in place, the annualized cost to the Louisville, Kentucky-based company would be about $125 million.