Many were shocked when a Chicago restaurant trademarked "Aloha Poke", and wrote to fish shops demanding that they stop using the Hawaiian moniker. 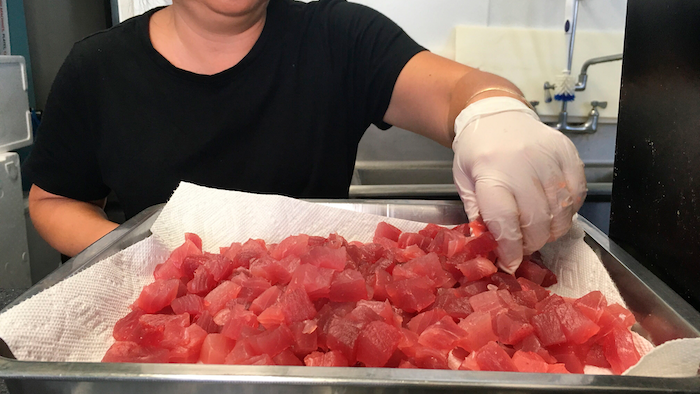 HONOLULU (AP) — Last year, much of Hawaii was shocked to learn a Chicago restaurant chain owner had trademarked the name "Aloha Poke" and wrote to cubed fish shops around the country demanding that they stop using the Hawaiian language moniker for their own eateries. The cease-and-desist letters targeted a downtown Honolulu restaurant and a Native Hawaiian-operated restaurant in Anchorage, among others.

Now, Hawaii lawmakers are considering adopting a resolution calling for the creation of legal protections for Native Hawaiian cultural intellectual property. The effort predates Aloha Poke, but that episode is lending a sense of urgency to a long-festering concern not unfamiliar to native cultures in other parts of the world.

"I was frustrated at the audacity of people from outside of our community using these legal mechanisms to basically bully people from our local community out of utilizing symbols and words that are important to our culture," said state Sen. Jarrett Keohokalole, a Native Hawaiian representing Kaneohe and Heeia.

The resolution calls on state agencies and Native Hawaiian organizations to form a task force to develop a legal system to "recognize and protect" Native Hawaiian cultural intellectual property and traditional cultural expressions. It also seeks protections for genetic resources, such as taro, a traditional crop that legend says is an ancestor of the Hawaiian people and that scientists have tried to genetically engineer in the past.

The task force would be commissioned to submit its recommendations and any proposed legislation to lawmakers in three years. The House passed the resolution Thursday. The Senate is scheduled to vote on it Monday.

The Aloha Poke incident echoes past disputes, like when a non-Hawaiian photographer claimed copyright over an image of a woman dancing hula and Disney copyrighted a modified version of a Hawaiian chant used in a movie. Chicago's Aloha Poke Co. chose as its battleground the word "aloha" — a term meaning love, compassion, kindness as well as hello and goodbye. It's a term central to how Native Hawaiians treat others and how many in Hawaii — Native Hawaiian or not — try to live.

"It's traumatic when things like this happen to us — when people try to take, modify or steal what's been in our people's world view for generations," said Healani Sonoda-Pale, chairwoman of the Ka Lahui Hawaii political action committee, who testified in support of the resolution. Aloha Poke CEO Chris Birkinshaw didn't return messages seeking comment left at his West Madison store in Chicago and on the company's website. The company has stores in Illinois, Wisconsin, Minnesota, Florida and Washington, D.C.

Aloha Poke Shop in Honolulu initially ignored the Chicago company's letter, said co-founder Jeff Sampson. When the issue burst into the news, he and his partners had an attorney write their Chicago counterpart saying they wouldn't change their name. They explained there would be no confusion between their businesses because they operated far from the mainland company's stores.

But Tasha Kahele, who is Native Hawaiian, has spent nearly $10,000 so far changing her Anchorage store's name to Lei's Poke Stop after receiving one of the letters.

Native Hawaiian experts note there's a cultural clash underlying much of this. Modern European-based traditions use trademarks, copyright and patents to create economic incentives and rewards for creating knowledge and culture. Indigenous culture, on the other hand, is often passed on through generations and held collectively.

"They're never going to sit nicely together in a box," said Kuhio Lewis, the CEO of the Council for Native Hawaiian Advancement. It will be difficult to determine who would decide who can use Native Hawaiian culture and who would be able to use it. Limits may violate the First Amendment of the U.S. Constitution. The task force will have to explore who can do what, Lewis said.

"At the least, they need to have some cultural sensitivity about how it's used. And they need to know you can't be telling Native Hawaiian businesses they can't use their own language," Lewis said. The resolution points to potential models in New Zealand and Alaska, which both created signifiers that indigenous people may place on their art as a mark of authenticity.

Charles E. Colman, a University of Hawaii law professor, said such programs hold up under federal law because they don't prohibit people from making work that resembles indigenous art. They merely won't allow people to say their work is produced by an indigenous person if it's not. Colman believes the Aloha Poke situation, on the other hand, could be addressed within existing trademark law.

He believes the Chicago company's trademark could be cancelled if challenged because it's not so well-known that its name has developed a secondary meaning the way the words in the retailer name "Best Buy" have, for example.

"You can't just register a descriptive phrase unless you've achieved a certain amount of public recognition," he said.