On one hand, Britain may not impose tariffs on imports in order to maintain food supplies. On the other, expensive tariffs could complicate exporting. 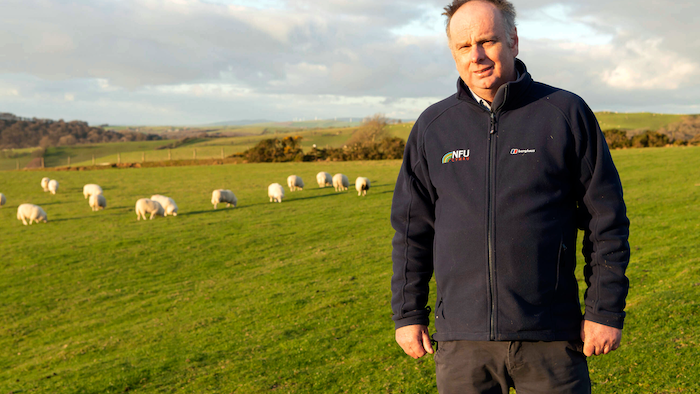 CEREDIGION, Wales (AP) — Wyn Evans's family has owned this 200-acre plot in western Wales for generations, a bucolic expanse where 370 sheep and 80 cows feast on the verdant grasses of undulating hillsides.

Evans, 55, wants his son to take over the farm that's been in the family for 500 years. But he's concerned that may not happen, as the rancorous debate over Brexit increases the risk Britain will leave the European Union without an agreement on future relations that would preserve free trade with the continent.

"People are extremely worried," he said, looking out across the craggy Atlantic coastline. "There is a very big lack of confidence in the industry at the moment."

U.K. meat producers are particularly vulnerable to the threat of a no-deal Brexit because 90 percent of their exports go to EU countries, meaning many would find themselves in jeopardy because of the tariffs and border delays that would follow a disorderly exit from the bloc.

Britain's Parliament on Tuesday refused to rule out a no-deal Brexit, voting instead to give Prime Minister Theresa May more time to try to iron out a compromise with the EU. May says the threat of leaving without an agreement, and the economic havoc that would cause on both sides of the English Channel, must remain a real possibility to bring EU negotiators to the table.

That is unacceptable to meat producers because in case of an exit without a deal trade would immediately revert to World Trade Organization rules, which would impose effective tariffs of 46 percent on British lamb and 48 percent to 84 percent on beef, according to the National Farmers' Union. About 30 percent of the lamb produced in the U.K. is exported, with 95 percent of those shipments destined for Europe.

In addition, meat shipments would likely face delays at European border crossings because truck drivers would be forced to show paperwork proving their cargoes meet EU standards. And Britain would immediately lose access to markets outside Europe that is currently guaranteed by EU trade agreements, leaving the U.K. an outsider hoping to eventually strike its own deals with countries like the United States and China. Such deals typically require years of negotiations.

"The real short-term issue is this: It will take months for us to get registered for livestock as a third country and given the potential for delays at the border, even if it is one-sided, there will be potential issues that hauliers will not want to make that route," said Tim Benton, co-author of a report about Brexit's impact on food supplies published by the Chatham House think tank.

"There is the potential for lambaggedon," Benton said. "That is the worst case scenario."

The problem shines a light on one of the ironies of the Brexit process. While some parts of Britain like Wales voted to leave the EU, many people in those regions stand to lose out most economically. Wales, for example, has been a net receiver of subsidies from the EU budget. But the June 2016 Brexit vote was campaigned on a number of issues including immigration.

As the Brexit talks have ground on for almost two years, the lack of clarity on what will come has been among the biggest problems for businesses, with many holding off investments or hiring.

There are also fears that Britain won't impose tariffs on imports in order to maintain food supplies, forcing local farmers to contend with cheap imports at home while losing markets on the Continent because of high tariffs. There's the threat that British markets will be flooded by imports from places like the U.S., which are currently barred under EU rules that ban meat raised with hormones.

"There will be British farmers out there lambing now with no guarantee about what market they will be selling into in three months' time, let alone a year or two down the line," the farmers union said in a statement.

Farmers aren't the only ones who are worried. Food retailers this week warned about higher prices and the possibility of shortages in a starkly worded letter that urged lawmakers to avoid a no-deal scenario.

Supermarket chains Sainsbury's and Waitrose, along with McDonald's restaurants, were among those saying they were "extremely concerned" about the disruption of food supplies, given that nearly one-third of the food Britons eat comes from the EU.

The retailers said their supply chains would be significantly disrupted if Britain leaves without a deal, and that increased transportation costs, an expected currency devaluation, and tariffs would cause food prices to rise. "Our ability to mitigate these risks is limited. As prudent businesses we are stockpiling where possible, but all frozen and chilled storage is already being used and there is very little general warehousing space available in the U.K.," the retailers said in a statement.

All this has real consequences for people like Evans, who worries that his family's long farming tradition will be a casualty of Britain's divorce from the EU. His son, Gwynfor, is at university studying business, because Evans wanted him to have something to fall back on if the farm doesn't survive.