Since last November contaminated raw turkey has made 164 ill in 35 states. 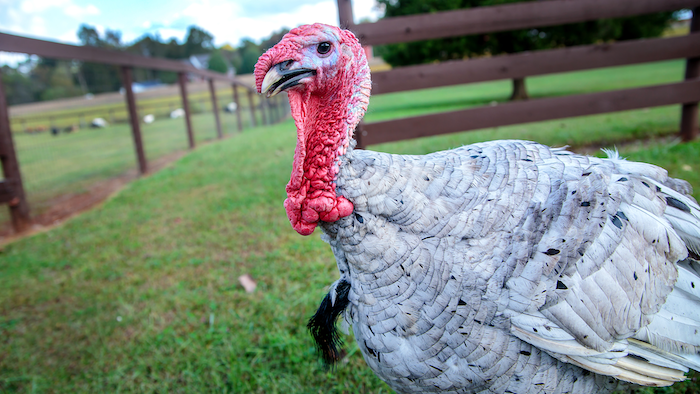 NEW YORK (AP) — Federal health officials on Thursday reported the first death in an ongoing salmonella outbreak linked to raw turkey. The Centers for Disease Control and Prevention said the death was in California but didn't have any immediate details. Since last November, the agency said 164 people have fallen ill in 35 states, with the most recent case being reported on October 20.

No products have been recalled, and the agency hasn't recommended that people avoid turkey, but it said it believes the outbreak is widespread and ongoing, and it reminded people to properly cook and handle turkey with Thanksgiving approaching. "We are still seeing new illnesses being reported on a weekly basis," said Colin Basler, an epidemiologist with the CDC.

Basler noted there is a lag time between when a person gets sick and when the illness gets reported to health officials. The California Department of Public Health did not immediately respond to an email seeking additional details about the death.

A single supplier hasn't been identified in connection with the outbreak. The rare salmonella strain was identified in live turkeys, as well as in ground turkey, turkey patties and raw turkey pet food. The National Turkey Federation said in a statement that its members have reviewed their salmonella-control programs. The industry group said programs include vaccination and sanitation, such as wearing protective boots and clothing to reduce birds' exposure to pathogens.

To limit risk, the CDC recommends cooking turkey to an internal temperature of at least 165 degrees, and washing hands and counters that have touched uncooked meat.

Salmonella can be found in a variety of foods, including packaged foods. This week, Conagra Brands recalled 2.4 million boxes of Duncan Hines cake mix because of a link to salmonella.

The CDC estimates salmonella causes about 1.2 million illnesses a year. Symptoms include diarrhea, fever and abdominal cramps and can last up to seven days. Illnesses are more likely to be severe in the elderly and infants, according to the CDC.

The company is reducing the number of its individual business segments from 17 to nine.
Aug 28th, 2020

To avoid learning about psocid activity in your facility from your auditor, you first need to know how to identify these minute pests.
Aug 27th, 2020
Follow Us
Most Recent