The lawsuit is the first case to go to trial, although hundreds of others claim that Roundup causes non-Hodgkin's lymphoma. 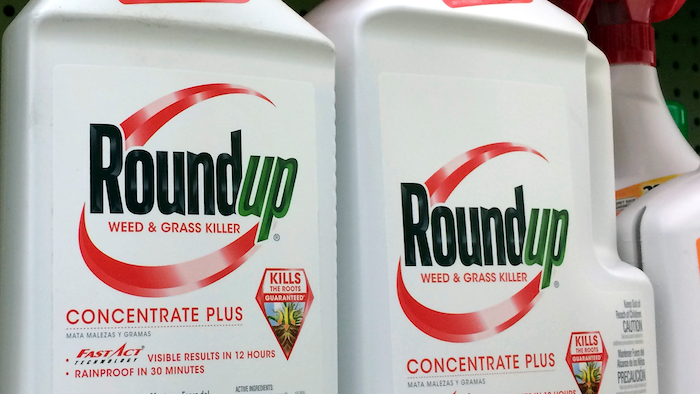 Johnson sprayed Roundup and a similar product, Ranger Pro, at his job as a pest control manager at a San Francisco Bay Area school district, according to his attorneys. He sprayed large quantities from a 50-gallon tank attached to a truck, his attorney, Brent Wisner, told jurors during his opening statement. When the wind was gusty, it would cover his face, Wisner said. When a hose broke once, it soaked his entire body.

Johnson read the label carefully and even contacted the company after developing a rash, but was never warned it could cause cancer, Wisner said. He was diagnosed with non-Hodgkin's lymphoma in 2014 at the age of 42. "The simple fact is he is going to die. It's just a matter of time," Wisner said, showing jurors photos of lesions on Johnson's body that he said were caused by cancer. Johnson sat nearby.

Wisner added, "Between now and then, it's just nothing but pain."

George Lombardi, an attorney for Monsanto, said non-Hodgkin's lymphoma takes years to develop, so Johnson's cancer started well before he began working at the school district. Many government regulators have rejected a link between the active ingredient in Roundup — glyphosate — and cancer. Monsanto has vehemently denied such a connection, saying hundreds of studies have established that glyphosate is safe.

"The scientific evidence is overwhelming that glyphosate-based products do not cause cancer and did not cause Mr. Johnson's cancer," Lombardi said during his opening statement.

The trial is expected to last about a month. Johnson is seeking unspecified damages against Monsanto.The outcome of Johnson's case will not affect the hundreds of other lawsuits in state and federal courts, but it may serve as an indicator of how the others might go.

St. Louis-based Monsanto developed glyphosate in the 1970s, and the weed killer is now sold in more than 160 countries. Farmers in California, the most agriculturally productive state in the U.S., use it on more than 200 types of crops. Homeowners use it on their lawns and gardens. The herbicide came under increasing scrutiny after the France-based International Agency for Research on Cancer, which is part of the World Health Organization, classified it as a "probable human carcinogen" in 2015.

A flurry of lawsuits against Monsanto in federal and state courts followed, and California added glyphosate to its list of chemicals known to cause cancer. Monsanto has attacked the international research agency's opinion as an outlier.

The U.S. Environmental Protection Agency says glyphosate is safe for humans when used in accordance with label directions. A draft report by the agency last year concluded the herbicide is not likely to be carcinogenic to humans. The report noted that science reviews by numerous other countries had reached the same conclusion.

A federal judge in Sacramento in February blocked California from requiring that Roundup carry a label stating that it is known to cause cancer, saying the warning is misleading because almost all regulators have concluded that there is no evidence glyphosate is carcinogenic. Another federal judge presiding over hundreds of lawsuits like Johnson's is deciding whether the claim that Roundup weed killer can cause cancer is supported by good science.