The tariffs "signal a most unwelcome development, which is that countries are becoming protectionist," said economist Taimur Baig of DBS Group. 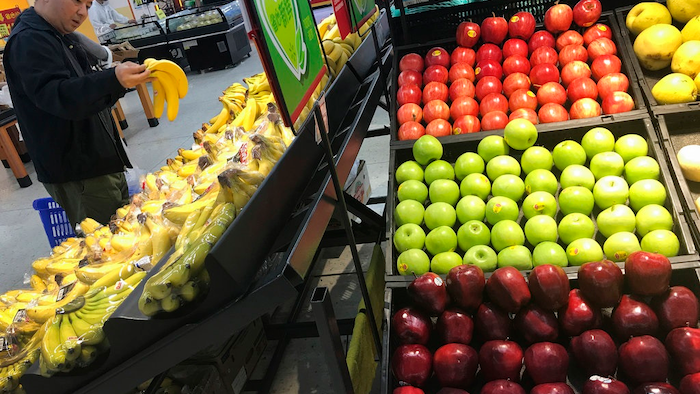 BEIJING (AP) — China raised import duties on a $3 billion list of U.S. pork, apples and other products Monday in an escalating dispute with Washington over trade and industrial policy.

The government of President Xi Jinping said it was responding to a U.S. tariff hike on steel and aluminum. But that is just one facet of sprawling tensions with Washington, Europe and Japan over a state-led economic model they complain hampers market access, protects Chinese companies and subsidizes exports in violation of Beijing's free-trade commitments.

Already, companies are looking ahead to a bigger fight over U.S. President Donald Trump's approval of higher duties on up to $50 billion of Chinese goods in response to complaints that Beijing steals or pressures foreign companies to hand over technology.

Forecasters say the impact of Monday's move should be limited, but investors worry the global recovery might be set back if other governments respond by raising import barriers.

On Monday, the main stock market indexes in Tokyo and Shanghai ended the day down.

The tariffs "signal a most unwelcome development, which is that countries are becoming protectionist," said economist Taimur Baig of DBS Group. But in commercial terms, they are "not very substantial" compared with China's $150 billion in annual imports of U.S. goods, he said.

Monday's tariff increase will hit American farm states, many of which voted for Trump in 2016.

Beijing is imposing a 25 percent tariff on U.S. pork and aluminum scrap and 15 percent on sparkling wine, steel pipe used by oil and gas companies, and an array of fruits and nuts including apples, walnuts and grapes.

There was no indication whether Beijing might exempt Chinese-owned American suppliers such as Smithfield Foods, the biggest U.S. pork producer, which is ramping up exports to China.

The U.S. tariff hike has "has seriously damaged our interests," the Finance Ministry said in a statement.

"Our country advocates and supports the multilateral trading system," it said. China's tariff increase "is a proper measure adopted by our country using World Trade Organization rules to protect our interests," the statement said.

The White House didn't respond to a message from The Associated Press on Sunday seeking comment.

White House spokeswoman Sarah Huckabee Sanders said Monday that Trump wants to "make sure we're that getting a good deal and we're not taken advantage of anymore."

Asked on the television show "Fox and Friends" about the potential impact of the tariffs on Trump supporters, Sanders said the president was concerned about the trade deficit with China. She said Trump was "going to fight back and he's going to push back."

The United States buys little Chinese steel and aluminum, but analysts said Beijing was certain to retaliate, partly to show its toughness ahead of possible bigger disputes.

Chinese officials have said Beijing is willing to negotiate, but in a confrontation will "fight to the end."

"China has already prepared for the worst," said Liu Yuanchun, executive dean of the National Academy of Development Strategy at Renmin University in Beijing. "The two sides, therefore, should sit down and negotiate."

The dispute reflects the clash between Trump's promise to narrow the U.S. trade surplus with China — a record $375.2 billion last year — and Beijing's ambitious plans to develop Chinese industry and technology.

The ruling Communist Party promised in 2013 to give market forces the "decisive role" in allocating resources. But at the same time, Xi has affirmed plans to build up state industries the party says are the central pillar of the economy.

"The thing that is going to be more challenging for Beijing is if the U.S., European Union and Japan get together and start taking measures on state-owned enterprises," said Baig. "That for me would be an escalation, whereas product-by-product back and forth, amounting to a few billion dollars here or there, is not a major substantive concern."

Foreign governments also accuse Beijing of violating free trade by requiring automakers and other foreign companies to work through state-owned Chinese partners. That requires them to give technology to potential competitors.

Last month, a U.S. official cited as "hugely problematic" Beijing's sweeping plan to create Chinese competitors in electric cars, robots, advanced manufacturing and other fields over the next decade. Business groups complain that strategy, dubbed "Made in China 2025," will limit or outright block access to those industries.

The country's top economic official, Premier Li Keqiang, promised at a news conference on March 20 there will be "no mandatory requirement for technology transfers." However, Chinese officials already deny foreign companies are required to hand over technology, leaving it unclear how policy might change.

Beijing has yet to say how it might respond.

Trump administration officials have identified as potential targets 1,300 product lines worth about $48 billion. That list will be open to a 30-day comment period for businesses.

The volleys of threats are "a process of game-playing to test each other's bottom lines," said Tu Xinquan, a trade expert at the University of International Business and Economics in Beijing.

"We are curious about what the U.S. side really wants," said Tu, "and wonder whether the United States can tolerate the consequences."

Could Tariffs Hurt Auto Industry in the South?