Improper use of nets could place a unique strain on Washington's fishing industry. 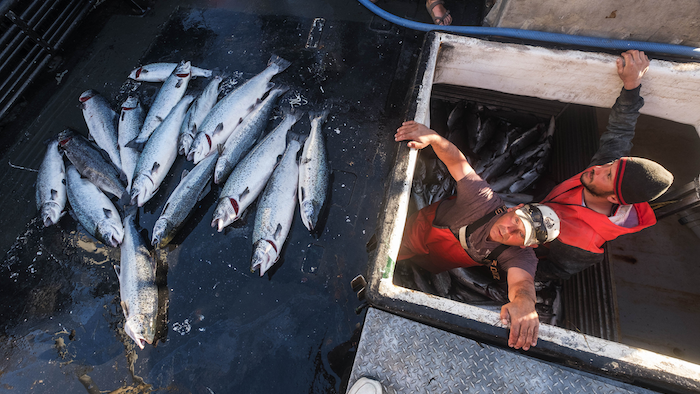 Cooke Aquaculture Pacific failed to adequately clean nets holding farmed salmon, leading to a net pen failure last summer that allowed the fish to swim away into Puget Sound, officials said in a report compiled by the state's departments of fish and wildlife, ecology and natural resources. The nets failed because they were excessively laden with mussels and other marine organisms, the report said. That increased the drag on the nets from tidal currents and overwhelming their mooring system, the report said.

More than 110 tons of mussels, clams and other material had accumulated on the nets, state Public Lands Commissioner Hilary Franz told reporters. "Cooke's disregard caused this disaster and recklessly put our state's aquatic ecosystem at risk," she said. "Cooke knew they had a problem and they didn't appropriately respond to deal with the problem," said state Ecology Director Maria Bellon. "The company could have and should have prevented this incident," she added.

State officials also accused the company of under-reporting how many fish escaped into Puget Sound on August 19 and over-reporting how many fish were captured. Ahead of the report's release, Cooke on Tuesday dismissed the state's investigation as incomplete and inaccurate. The company said Cooke employees under state supervision counted each fish as it was recovered.

Company vice president Joel Richardson said in a statement that Cooke was shut out of the investigative process, leading to "an inaccurate and misleading document," referring to the report by state officials. He said Cooke acknowledges that the facility fell behind in cleaning the nets before moorings failed in July of 2017. But he said the company provided records showing it had washed the nets at the site after that July incident and before the August 19 event. The company also complained that the state agencies gave it only several days to provide feedback on the lengthy report.

Gov. Jay Inslee, a Democrat, said he would keep in place the state's moratorium on net pen permits. "We're going to do an intensive review of all of the downsides of these operations to the Puget Sound system," he said. "We really need to look at the scale of this damage and really understand where these fish went and what they did."

Before the collapse, Cooke was applying to build a new marine salmon farm in the Strait of Juan de Fuca in Clallam County. The release of Atlantic salmon raised concerns about the potential impact of those fish on native salmon runs. The Lummi Nation, a tribe in northwest Washington state, declared a state of emergency last summer over concerns that native salmon were threatened.

The pen off Cypress Island held about 305,000 Atlantic salmon that were close to being harvested. Between 243,000 and 263,000 fish actually escaped. Cooke's previous estimates put that number at 160,000, according to the state's report. The report said 57,000 of the escaped fish have been caught.

Cooke owns and operates commercial salmon farms throughout Washington state which it bought from Icicle Acquisition Subsidiary in 2016. Cooke said the report would create unfair bias against Cooke as state lawmakers weigh several bills that attempt to ban or limit finfish aquaculture.

A bill sponsored by Sen. Kevin Ranker, a Democrat, cleared a key fiscal committee Monday. Senate Bill 6086 prohibits the state natural resources department from entering into new leases or renewing existing leases for marine finfish farming of Atlantic or other non-native finfish. All Cooke commercial net pens in Washington have leases to be on state-owned land that is under water and along shores.

In December, Franz terminated the state's lease with Cooke at another farmed salmon operation in Port Angeles, saying the company violated the terms of the lease. Cooke has challenged that decision in Clallam County Superior Court.

On Tuesday, Franz said she'll announce in coming days the future of the Cooke's lease at the Cypress Island facility where the net failure occurred. It has been operating for more than 30 years.