Amazon plans to use its deep pockets to cut prices on bananas, eggs, salmon, beef and more when it completes its $13.7 billion takeover next week. 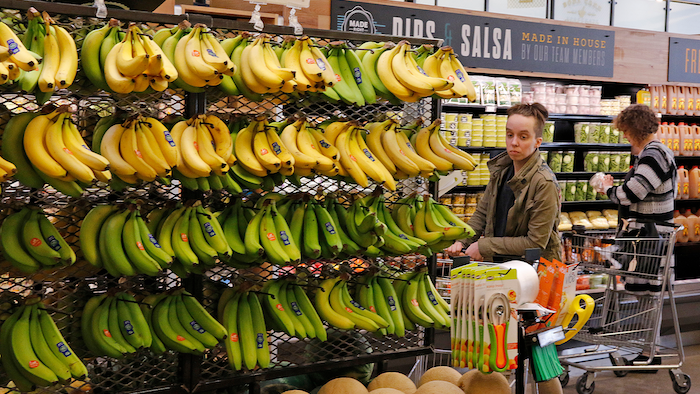 NEW YORK (AP) — Amazon plans to use its deep pockets to make big changes at Whole Foods, saying it will cut prices on bananas, eggs, salmon, beef and more when it completes its $13.7 billion takeover next week.

Helping Whole Foods win back customers who found "good enough" organic and natural products elsewhere — possibly at a lower cost — fits Amazon's track record of keeping prices low to lock in customer loyalty. Looking ahead, Amazon hopes to give members of its Prime program special savings and other in-store benefits.

It's an "opening salvo" in the grocery wars, said Neil Saunders, managing director of GlobalData Retail, and shares of other supermarkets fell sharply on the news. "Rivals should be under no illusion that they are now dealing with a competitor that is not afraid to damage profits and margins if it creates long-term gains," Saunders said in an analyst note.

Amazon's announcement comes a day after Whole Foods shareholders gave their approval and the Federal Trade Commission said it would not block the purchase. Amazon will pay $42 per Whole Foods share, an 18 percent premium from its price the day before the tie-up was announced June 16. The stock edged up to $41.98 on Thursday.

By buying Whole Foods, Amazon is taking a bold step into brick-and-mortar, with its more than 460 stores and potentially very lucrative data about how shoppers behave offline. The grocery chain, which has fought the "Whole Paycheck" reputation, had been under shareholder pressure to improve results as customers moved on and discount chains like Lidl and Aldi expanded in the U.S.

Whether Amazon will succeed in the fiercely competitive grocery segment is unclear, but customers are going to benefit from the attempt, said Charlie O'Shea, lead retail analyst at Moody's Investors Service. "Amazon can come in and price items very low," he said. "Its shareholders are agnostic about profit, and seem more interested revenue and market share. That's a competitive advantage."

Rivals have been scrambling to catch up with the e-commerce giant. Walmart, which has the largest share of the U.S. grocery market, is expanding its grocery delivery service with ride-hailing service Uber and announced Wednesday that it will join forces with Google to let shoppers order goods by voice on Google devices.

While Whole Foods accounts for less than three percent of U.S. grocery and supermarket sales, the purchase gives Amazon a foothold in a fragile industry that can ill-afford more price cutting. "Lower prices could be catastrophic for some operators," said Madeline Hurley, a senior analyst at market research firm IBISWorld. "It could drive them out of the industry."

On average, she said, supermarkets only squeeze about $1 of profit out of every $100 in revenue. Hurley said she is not sure how big competitors like Walmart will fare, but that Amazon is showing a determination to shake things up, and fast. "There was a lot of speculation that Whole Foods might be left as more of an independent entity, at least in the beginning phases of the acquisition," she said. "This shows that Amazon is taking a very hands-on approach."

Financial analysts say one challenge for Amazon is how to cut prices and broaden Whole Foods' appeal without hurting the chain's image for quality food. It's a tricky balance that Amazon itself seemed to acknowledge in its statement.

"Everybody should be able to eat Whole Foods Market quality — we will lower prices without compromising Whole Foods Market's long-held commitment to the highest standards," said Jeff Wilke, CEO of AmazonWorldwide Consumer.

Earlier this month, Amazon sold $16 billion of bonds in order to pay for the purchase. Its shares were down 0.6 percent to $952.45 on Thursday.