Mexico is the No. 3 market for U.S. agriculture, notably corn, soybeans and pork. 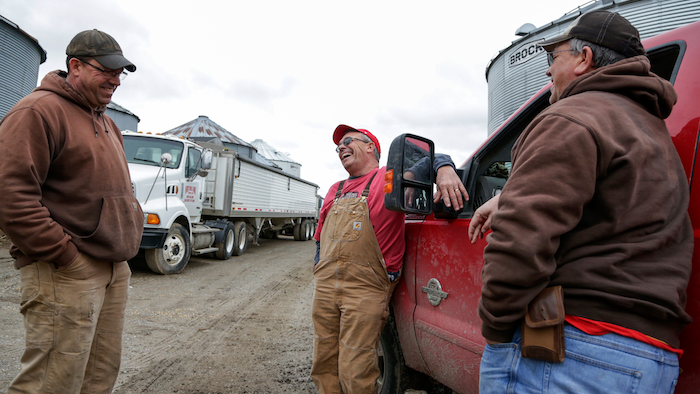 WASHINGTON (AP) — A sizable majority of rural Americans backed Donald Trump's presidential bid, drawn to his calls to slash environmental rules, strengthen law enforcement and replace the federal health care law. But last month, many of them struck a sour note after White House aides signaled that Trump would deliver on another signature vow by edging toward abandoning the North American Free Trade Agreement.

Trump's message that NAFTA was a job-killing disaster had never resonated much in rural America. NAFTA had widened access to Mexican and Canadian markets, boosting U.S. farm exports and benefiting many farmers. "Mr. President, America's corn farmers helped elect you," Wesley Spurlock of the National Corn Growers Association warned in a statement. "Withdrawing from NAFTA would be disastrous for American agriculture."

Within hours, Trump softened his stance. He wouldn't actually dump NAFTA, he said. He'd first try to forge a more advantageous deal with Mexico and Canada — a move that formally began Thursday when his top trade negotiator, Robert Lighthizer, announced the administration's intent to renegotiate NAFTA.

Farmers have been relieved that NAFTA has survived so far. Yet many remain nervous about where Trump's trade policy will lead.

As a candidate, Trump defined his "America First" stance as a means to fight unfair foreign competition. He blamed unjust deals for swelling U.S. trade gaps and stealing factory jobs.

But NAFTA and other deals have been good for American farmers, who stand to lose if Trump ditches the pact or ignites a trade war. The United States has enjoyed a trade surplus in farm products since at least 1967, government data show. Last year, farm exports exceeded imports by $20.5 billion.

"You don't start off trade negotiations ... by picking fights with your trade partners that are completely unnecessary," says Aaron Lehman, a fifth-generation Iowa farmer who produces corn, soybeans, oats and hay. Many farmers worry that Trump's policies will jeopardize their exports just as they face weaker crop and livestock prices.

"It comes up pretty quickly in conversation," says Blake Hurst, a corn and soybean farmer in northwestern Missouri's Atchison County.

That county's voters backed Trump more than 3-to-1 in the election but now feel "it would be better if the rhetoric (on trade) was a little less strident," says Hurst, president of the Missouri Farm Bureau.

Trump's main argument against NAFTA and other pacts was that they exposed American workers to unequal competition with low-wage workers in countries like Mexico and China.

NAFTA did lead some American manufacturers to move factories and jobs to Mexico. But since it took effect in 1994 and eased tariffs, annual farm exports to Mexico have jumped nearly five-fold to about $18 billion. Mexico is the No. 3 market for U.S. agriculture, notably corn, soybeans and pork.

"The trade agreements that we've had have been very beneficial," says Stephen Censky, CEO of the American Soybean Association. "We need to take care not to blow the significant gains that agriculture has won."

The U.S. has run a surplus in farm trade with Mexico for 20 of the 23 years since NAFTA took effect. Still, the surpluses with Mexico became deficits in 2015 and 2016 as global livestock and grain prices plummeted and shrank the value of American exports, notes Joseph Glauber of the International Food Policy Research Institute.

Mexico has begun to seek alternatives to U.S. food because, as its agriculture secretary, Jose Calzada Rovirosa, said in March, Trump's remarks on trade "have injected uncertainty" into the agriculture business.

Once word had surfaced that Trump was considering pulling out of NAFTA, Sonny Perdue, two days into his job as the president's agriculture secretary, hastened to the White House with a map showing areas that would be hurt most by a pullout, overlapped with many that voted for Trump.

"I tried to demonstrate to him that in the agricultural market, sometimes words like 'withdraw' or 'terminate' can have a major impact on markets," Perdue said in an interview with The Associated Press. "I think the president made a very wise decision for the benefit of many agricultural producers across the country" by choosing to remain in NAFTA.

Trump delivered another disappointment for U.S. farm groups in January by fulfilling a pledge to abandon the Trans-Pacific Partnership, which the Obama administration negotiated with 11 Asia-Pacific countries. Trump argued that the pact would cost Americans jobs by pitting them against low-wage Asian labor.

But the deal would have given U.S. farmers broader access to Japan's notoriously impregnable market and easier entry into fast-growing Vietnam. Philip Seng of the U.S. Meat Export Federation notes that the U.S. withdrawal from TPP left Australia with a competitive advantage because it had already negotiated lower tariffs in Japan.

Trump has also threatened to impose tariffs on Chinese and Mexican imports, thereby raising fears that those trading partners would retaliate with their own sanctions.

Farmers know they're frequently the first casualties of trade wars. Many recall a 2009 trade rift in which China responded to U.S. tire tariffs by imposing tariffs on U.S. chicken parts. And Mexico slapped tariffs on U.S. goods ranging from ham to onions to Christmas trees in 2009 to protest a ban on Mexican trucks crossing the border.

The White House declined to comment on farmers' fears that Trump's trade policy stands to hurt them. But officials say they've sought to ease concerns, by, for example, having Agriculture Secretary Perdue announce a new undersecretary to oversee trade and foreign agricultural affairs.

Many farmers are still hopeful about the Trump administration. Some, for example, applaud his plans to slash environmental rules that they say inflate the cost of running a farm. Some also hold out hope that the author of "The Art of the Deal" will negotiate ways to improve NAFTA.

One such way might involve Canada. NAFTA let Canada shield its dairy farmers from foreign competition behind tariffs and regulations but left at least one exception — an American ultra-filtered milk used in cheese. When Canadian farmers complained about the cheaper imports, Canada changed its policy and effectively priced ultra-filtered American milk out of the market.

"Canada has made business for our dairy farmers in Wisconsin and other border states very difficult," Trump tweeted last month. "We will not stand for this. Watch!"

Some U.S. cattle producers would also like a renegotiated NAFTA to give them something the current version doesn't: The right to label their product "Made in America." In 2015, the World Trade Organization struck down the United States' country-of-origin labeling rules as unfair to Mexico and Canada.

Many still worry that Trump's planned overhaul of American trade policy is built to revive manufacturing and that farming remains an afterthought.

"So much of the conversation in the campaign had been in Detroit or in Indiana" and focused on manufacturing jobs," said Kathy Baylis, an economist at the University of Illinois. The importance of American farm exports "never made it into the rhetoric."