Supporters say the tax revenue could support recycling efforts that did not exist when the bottle redemption systems were introduced. 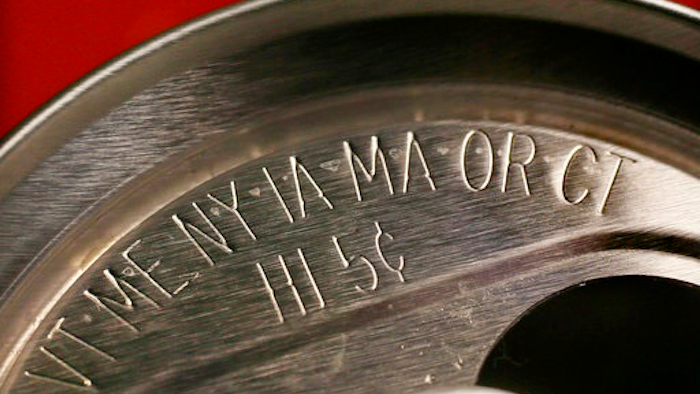 Connecticut, Massachusetts and Iowa are among the states where bills have been proposed to replace the bottle deposits with a tax. Supporters say the tax revenue could support recycling efforts that did not exist when the bottle redemption systems were introduced.

The so-called "bottle bills" remain in place in 10 states. Typically, consumers pay an extra few cents when they buy certain beverages, a deposit they get back when they bring their cans or bottles to a redemption center or grocery store.

Some fear people will be more likely to toss their empties if they're no longer worth cash.

"This is the most effective, proven way that we have to guarantee that these containers do not end up on our streets and do not end up on our beaches and open spaces as litter," said Louis Burch, the Connecticut program director for Citizens Campaign for the Environment.

In 1971, Oregon became the first state to pass a bottle bill. It was seen as a way to address a growing litter problem along the state's beaches and highways. Since then, Hawaii, California, Iowa, Michigan, New York, Vermont, Maine, Connecticut and Massachusetts have passed similar legislation. The types of beverage containers and the deposit amounts can vary by state.

In eight of the 10 deposit states, beverage distributors have both the financial and operational responsibility for the system.

Kevin Dietly, an economic consultant to the American Beverage Association, said there is no evidence that litter is any worse in Delaware since that state scrapped its bottle bill in 2010.

In Connecticut, distributors were allowed to keep the unclaimed bottle deposits to help offset the costs of running the program, but state officials decided in 2009 to use that money — about $34 million each year — to help balance the government's budget.

That change, coupled with the growth in single-stream recycling where glass, metal, plastic and paper is placed in a resident's curbside bin, has prompted legislation that would replace the existing bottle redemption system. It would create a two-phase system covering a broader range of containers and creating a minimum 4-cent tax.

Lawrence Cafero, executive director and general counsel of the Wine and Spirits Wholesalers of Connecticut, said the two recycling systems have "competed with each other over the years with very mixed and, some might say disappointing results" in the state. He said it's time to choose one system over the other.

Susan Collins, president of the Container Recycling Institute, said it would be towns and taxpayers that get stuck with the bill for single-stream recycling.

There are other bills up for debate this year in Connecticut that would increase the handling fee paid to redemption centers, increase the deposit to 10 cents and expand the law to include other beverages, such as teas and sports drinks.

An estimated 3,000 to 3,500 jobs in New England and New York stem from bottle bill laws currently in place, according to Andrew Crowley, a senior plant manager for Strategic Materials, overseeing glass recycling operations in Connecticut, Rhode Island and Massachusetts. He has warned lawmakers that scrapping the bottle deposit system would lead to the elimination of jobs.

"We think there are advantages to both systems and I wouldn't propose going too radical in either direction," he said.