The question of who would work the tough jobs was at the forefront of the debate, though many were adamant they aren't anti-immigrant. 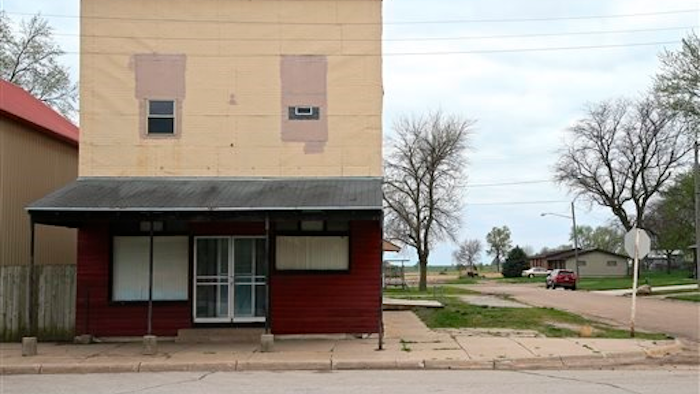 NICKERSON, Neb. (AP) — Half-ton pickup trucks crowd the curb outside the One Horse Saloon, a neon Coors Light sign in the window and rib-eye steaks on the menu, but otherwise Nickerson, Nebraska, is nearly silent on a spring evening, with only rumbling freight trains interrupting bird songs.

Regional economic development officials thought it was the perfect spot for a chicken processing plant that would liven up the 400-person town with 1,100 jobs, more than it had ever seen. When plans leaked out, though, there was no celebration, only furious opposition that culminated in residents packing the fire hall to complain the roads couldn't handle the truck traffic, the stench from the plant would be unbearable and immigrants and out-of-towners would flood the area, overwhelming schools and changing the town's character.

"Everyone was against it," said Jackie Ladd, who has lived there for more than 30 years. "How many jobs would it mean for people here? Not many."

The village board unanimously voted against the proposed $300 million plant, and two weeks later, the company said they'd take their plant — and money — elsewhere.

Deep-rooted, rural agricultural communities around the U.S. are seeking economic investments to keep from shedding residents, but those very places face trade-offs that increasing numbers of those who oppose meat processing plants say threaten to burden their way of life and bring in outsiders.

"Maybe it's just an issue of the times in which we live in which so many people want certain things but they don't want the inconveniences that go with them," said Chris Young, executive director of the American Association of Meat Processors.

Nickerson fought against Georgia-based Lincoln Premium Poultry, which wanted to process 1.6 million chickens a week for warehouse chain Costco. It was a similar story in Turlock, California, which turned down a hog-processing plant last fall, and Port Arthur, Texas, where residents last week stopped a meat processing plant. There also were complaints this month about a huge hog processing plant planned in Mason City, Iowa, but the project has moved ahead.

The Nickerson plant would have helped area farmers, who mostly grow corn and soybeans, start up poultry operations and buy locally grown grain for feed, said Willow Holliback, who lives 40 miles away and heads an agriculture group that backed the proposal.

The question of who would work the tough jobs was at the forefront of the debate, though many were adamant they aren't anti-immigrant. Opposition leader Randy Ruppert even announced: "This is not about race. This is not about religion."

But both were raised at the raucous April 4 meeting where the local board rejected the plant. One speaker said he'd toured a chicken processing plant elsewhere and felt nervous because most of the workers were minorities.

More overtly, John Wiegert, from nearby Fremont where two meat processors employ many immigrants, questioned whether Nickerson's plant would attract legal immigrants from Somalia — more than 1,000 of whom have moved to other Nebraska cities for similar jobs, along with people from Mexico, Central America and Southeast Asia.

"Being a Christian, I don't want Somalis in here," Wiegert, who has led efforts to deny rental housing to immigrants in the country illegally, told the crowd. "They're of Muslim descent. I'm worried about the type of people this is going to attract."

Others pointed out that, given Nebraska's unemployment rate is among the nation's lowest near 3 percent, few local residents would accept the entry-level jobs. While the projected wage of $13 to $17 an hour was above the region's current median wage for production workers, opponents argued meat processors generally have high turnover.

The land is flat and rich around Nickerson, which is a half-mile off a narrow state highway about 30 miles from Omaha. The town's tidy but often faded single-story homes sit on large, grassy lots. There's a small cluster of commercial buildings, most of them long shuttered, and a grain elevator.

Its school was demolished more than a decade ago, leaving only the old playground, but residents take pride in the regional school district. Superintendent Jeremy Klein told the village board he worried new students would overwhelm local schools and that tax breaks would limit any extra money to hire more teachers.

"It's impossible to know what the size of that impact will be," Klein said days later.

People seem to be more willing than in earlier eras to fight developments they think could harm the environment or change an area's character, University of Nebraska-Lincoln economics professor Eric Thompson said, even if the development offers an economic boost.

Mason City official Brent Trout said he heard all the arguments against the $240 million plant planned some 200 miles northeast of Nickerson: What's the environmental impact of an operation that will process up to 22,000 hogs daily? How will 2,000 new jobs affect the isolated city of 27,500?

It's already hard to attract employers to Mason City, which has lost about 10 percent of its population over the last 30 years, he said. But, like Nickerson, Mason City's best selling point is its focus on agriculture: "This is what Iowa is. This is what Iowa does," Trout said. "We raise pigs and we process pigs."

Although Nickerson residents have succeeded in pushing away the industrial-scale operation, opponents said they're getting better organized to help the town that's targeted next.

"I've lived in exotic places, but I've never wanted to live anywhere but here," said Chuck Folsom, an 88-year-old former Marine and farmer. "We've got to protect the land. We're not making any more of it."