The world population will reach 9.6 billion people by 2050, and therefore food production must increase by 70 percent. 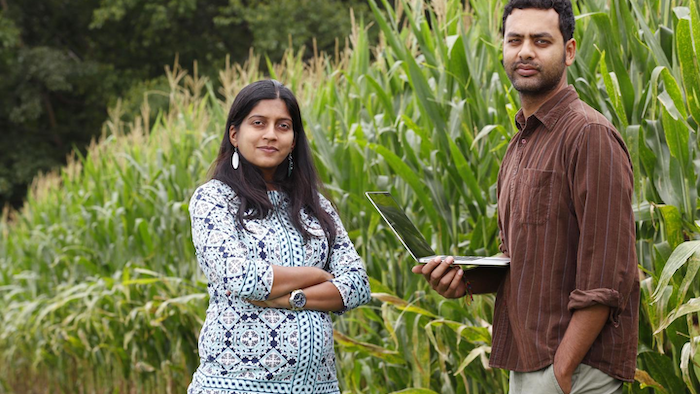 Acceptance of information technology can play a vital role in meeting the demand for food in developing countries, according to a new study by Iowa State University researchers. The research is published in the journal Information Technologies and International Development.

It's projected that the world population will reach 9.6 billion people by 2050, and therefore food production must increase by 70 percent. But Prashant Rajan, an adjunct assistant professor of English and communication studies, and Shweta Chopra, an assistant professor of agricultural and biosystems engineering, say production is not the only solution to meet the growing demand for food.

"A lot of people talk about how to increase production. We found that production is not a challenge in some areas. There is enough food, but the problem is logistics and providing access to food," Chopra said. "Communication and information technology can improve access to food and trace where the food is coming from and how it's being processed, rather than just putting all the resources into production."

Chopra and Rajan traveled to Chhattisgarh, India - a rice-surplus state - to study how the government is using technology to improve its public distribution system for food.

India spends $13 to 14 billion annually procuring food from farmers and giving it to people in need. But around 40 percent of the food that circulates through the system is lost, Rajan said.

"What's happening is food that is meant for people living below the poverty line is being diverted into the open market or black market by people who are responsible for distributing the food from farm to table," Rajan said. "What we're looking at in Chhattisgarh is essentially 5.4 million households or a little over 20 million people who stand to benefit from targeted technological reforms that can improve the efficiencies and transparency of food distribution."

Information and communication technology has the potential to reduce waste and theft in India's public distribution system as well as improve food access for beneficiaries, Chopra said. Families now use a card, similar to an ATM or debit card, to get their monthly food subsidy.

Each transaction is recorded electronically, which creates transparency and checks and balances for where the food is distributed, she said. It also gives families the freedom to choose where they shop. Prior to this change, families were assigned to a single shop.

However, successful implementation of these technologies is often hindered by resistance from shop owners and salespeople, who must adopt and integrate the new technology in their operations.

The fair-shop owners and salespeople, who distribute the food to beneficiaries, must see a benefit. Chopra and Rajan surveyed 166, or 75 percent, of the salespeople using the technology in four Chhattisgarh districts in 2013.

They expected many to be dissatisfied, and were surprised to find that the more experienced salespeople - often older and less educated - had a greater appreciation for the technology.

"The person who was less educated found the complex calculations that they had to do by hand to be more difficult," Chopra said. "The technology provided them a more organized way to do their monthly sales calculations and their daily stock keeping."

The results do not suggest that younger, more educated salespeople dislike the technology. Chopra and Rajan say they simply relate to technology in a different way. The study found shop owners and salespeople feel the technology has also increased their credibility and social influence.

Rajan explained that it's not unusual for salespeople to give into local political pressures to cheat the system out of fear for their livelihood. As a result, they lost respect in the community and were accused of stealing food subsidies from customers who are generally friends and neighbors. With the new technology for tracking and accountability, it is now easier for salespeople to defend against those pressures.

"If you want to eliminate the pilferage and the theft of food that rightfully belongs to citizens, you need to address the people who are responsible for providing food access," Rajan said. "For a lot of honest salespeople, the technology was a way to address the stigma that was associated with their job."

Applying What They Learned

As government agencies implement and expand the use of information and communication technology, training will be an important part of the process.

Through their research, Chopra and Rajan found that salespeople in Chhattisgarh perceived training sessions taught by government officials or engineers could be intimidating and insufficient.

Chopra and Rajan have recommended having salespeople train their peers as they can better relate and explain the benefits of the technology.

The researchers say the study also shows the benefits of cross-disciplinary collaboration across agricultural and biosystems engineering and communication studies to develop novel approaches to development issues such as food access.