Americans, and Cubans who later become Americans, can sue almost any company deemed to be "trafficking" in property confiscated by Cuba's government. 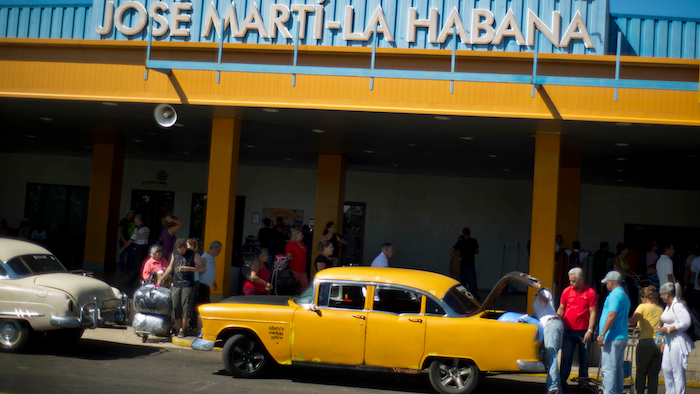 In this Sept. 1, 2014 file photo, people put their luggage in a private taxi as they arrive from the U.S. to the Jose Marti International Airport in Havana, Cuba. In 1958, the father of José Ramón López owned Cuba's main airport, its national airline and three small hotels. All were taken in Cuba's socialist revolution. Starting Thursday, they will be able to file lawsuits against European and American companies doing business on their former properties, thanks to the Trump administration's decision to activate a provision of the U.S. embargo on Cuba with the potential to affect foreign investment in Cuba for many years to come.
AP Photo/Ramon Espinosa, File

Conchita Beltrán's family had about 2,160 acres (874 hectares) of sugar and tobacco fields. They were taken, too.

Both moved to the United States and abandoned hope of compensation for their properties as Cuba and the U.S. severed relations and fought during decades of the Cold War.

Both hope that, starting Thursday, they will be able to file lawsuits against European and American companies doing business on their former properties, thanks to the Trump administration's decision to activate a provision of the U.S. embargo on Cuba with the potential to affect foreign investment in Cuba for many years to come.

Known as Title III of the 1996 Helms-Burton Act, the section allows Americans, and Cubans who later become Americans, to sue almost any company deemed to be "trafficking" in property confiscated by Cuba's government. Every president since the law's passage has suspended Title III because of objections from U.S. allies doing business in Cuba and because of the potential effect on future negotiated settlements between the U.S. and Cuba.

The law contains exceptions for residential properties, properties worth less than $50,000 and properties linked to travel to Cuba deemed legal under U.S. law. Its activation Thursday could nonetheless generate dozens, even hundreds of lawsuits, along with trade fights between the U.S. on one side and countries including Spain, France and Britain on the other.

Among the first to sue Thursday in federal court in Miami were Mickael Behn y Javier García Bengochea, the heirs of families that owned ports in Havana and Santiago de Cuba now being used to dock cruise ships that began traveling to Cuba in 2016 under President Barack Obama's detente with the island.

Behn's grandfather, American William C. Behn, was president of the company Havana Docks, which owned three docks in the capital that were confiscated in 1960. Mickael Behn, a television executive who lives between Miami and London, says he is suing for up to three times the current value of the docks, as permitted under the law.

Bengochea, a neurosurgeon who lives in northeast Florida, owns 80 percent of the shares of the confiscated Cuban company La Marítima, which operated the port of Santiago de Cuba. He is suing for up to $20 million.

"We want to get justice," said Bob Martinez, the lawyer for both men. "This was a robbery and what we're trying to get is compensation for the illegal use of these properties."

Lawyers and potential plaintiffs say they expect only a trickle of lawsuits at first due to the expense and complexity of filing litigation under a law that is being put into effect for the first time and touches on issues of international trade and sovereignty.

Suing is also expensive, with initial filing fees of more than $6,500 a case. There is also the difficulty and expense of proving ownership with old Cuban documents.

López said he plans to sue airlines including Aeroméxico, LATAM of Chile and Copa of Panama. Other potential major targets include Spanish hotel chains Meliá and Iberostar, Pernod Ricard of France and U.S. cruise lines that dock at ports confiscated from U.S. residents.

"There's enormous worry," the European Union's ambassador to Cuba, Alberto Navarro, told The Associated Press last week. "There are businesspeople who've been here 20, 30 years, who've made bets on investing their financial resources in Cuba to stimulate commerce, tourism, international exchange, and many of them tell me that they haven't lived through a similar situation."

The activation of Title III has provoked protests from the European Union, Canada and Cuba, which fears its already lagging levels of foreign investment could be permanently crippled. At a Cuban government-organized May Day parade Wednesday in Havana, marchers carried signs and chanted slogans denouncing the Helms-Burton law.

Beltrán said her family had 860 acres (348 hectares) of sugar fields and 1,300 acres (526 hectares) of tobacco in western Pinar del Rio province. She has no idea if she will be able to sue a foreign corporation doing business related to her properties, but she is optimistic.

"God willing, I want to see restitution or compensation before I die," said Beltrán, 76, who fled to Miami in 1961. She said her husband died 35 years ago dreaming of some form of compensation for their loss.

"For me, justice is being done," she said of the decision to activate the law.

The State Department has certified some 6,000 claims worth approximately $8 billion at current values. There are an additional 200,000 uncertified claims, many by Cuban-Americans, whose value could reach into the tens of billions of dollars.

One of the uncertified claims belongs to López, whose family had owned the airport, airline Cubana de Aviación and three hotels in Havana and the southern city of Cienfuegos since 1952. Along with the airlines, López said, he is preparing documents to sue the Cuban government and Meliá, which runs the Cienfuegos hotel

He said he isn't worried by the potential investment of time or money.

"At the end of the day they're going to recognize that it's ours," said López, a 65-year-old retiree who divides his time between Madrid and Miami. "The moment has finally come."