Court records don't indicate why Judge Earl Britt, who's in his mid-80s and semi-retired, was replaced or for how long. 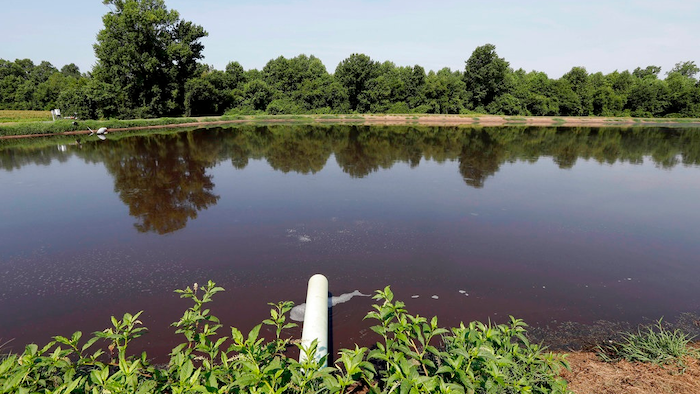 In this July 21, 2017 file photo, a hog waste pond is seen at a farm that has hogs owned by Smithfield Foods in Farmville, N.C. A federal jury decided Friday, Aug. 3, 2018, that the world's largest pork producer should pay $473.5 million to neighbors of three North Carolina industrial-scale hog farms for unreasonable nuisances they suffered from odors, flies and rumbling trucks. The jury found that Smithfield Foods owes compensation to 16 neighbors who complained in their lawsuit that the company failed to stop “the obnoxious, recurrent odors and other causes of nuisance” resulting from closely packed hogs, which “generate many times more sewage than entire towns.”
AP Photo/Gerry Broome, File

RALEIGH, N.C. (AP) — The federal judge who's managing a series of North Carolina lawsuits accusing the world's largest pork company of creating nuisances for rural neighbors is being temporarily replaced.

The order replacing U.S. District Judge Earl Britt for a trial starting next month was finalized Monday. Court records don't indicate why Britt, who's in his mid-80s and semi-retired, was replaced or for how long.

Chief Judge Roger Gregory of the U.S. 4th Circuit Court of Appeals designated federal Judge David Faber of West Virginia to hear the upcoming trial. Gregory acted "at the request of the district to assist with its caseload," he said in an email response relayed by court clerk Patricia Connor. She was unable to reach Gregory to explain whether that meant the intent was to free Britt to handle other legal matters.

Gregory can appoint so-called senior judges like Britt and Faber to hear cases within the appellate district, which includes the Carolinas, Maryland, Virginia and West Virginia.

A state legislator who represents the industry's core turf in the country's No. 2 pork-producing state has accused Britt of "unbridled bias" in managing the three trials so far. Britt is "an old has-been judge with an observable bias against the hog industry and he ran Lady Justice out of his courtroom," Republican Rep. Jimmy Dixon wrote in a newspaper column last month.

North Carolina Pork Council chief executive officer Andy Curliss has criticized Britt for decisions including refusing repeated requests by Smithfield lawyers to have jurors tour the industrial-scale hog operations being sued. Lawyers for the suing neighbors countered that smell intensity can vary widely hour by hour, and farm operators would spruce up ahead of a visit, giving jurors a false impression of the day-to-day reality.

"It is not clear what a change in the judge means for the future cases, but I can speak for hog farmers who will be hopeful that there's a fresh look at some of the rulings that have been made" that may have shaped the outcomes of previous trials, Curliss said.

But Michelle Nowlin, who supervises the Environmental Law and Policy Clinic at Duke University's law school, said criticisms of Britt are like "a lot of poor losers after a sporting event complaining about the referees who were biased against their team,"

She added, "I've attended several days of the trials. The judge has issued rulings from the bench that favor both sides."

Britt's temporary replacement "doesn't tell us anything at all," Nowlin said.

Faber was assigned to be on the bench for the trial starting Sept. 4 in which neighbors are suing Smithfield over the smells, flies and pests caused by a 7,100-hog farm the company owns in Sampson County. It's not clear who will be the judge for the subsequent trial, but Faber is also due to run the sixth trial starting in late November.

More than two dozen lawsuits involving more than 500 neighbors of intensive animal operations have been pending for four years.