Jack McCall spent 30 years toting a backpack of Roundup to apply to produce on his 20-acre farm. He died of cancer in late 2015, and his widow believes a warning would have saved his life. 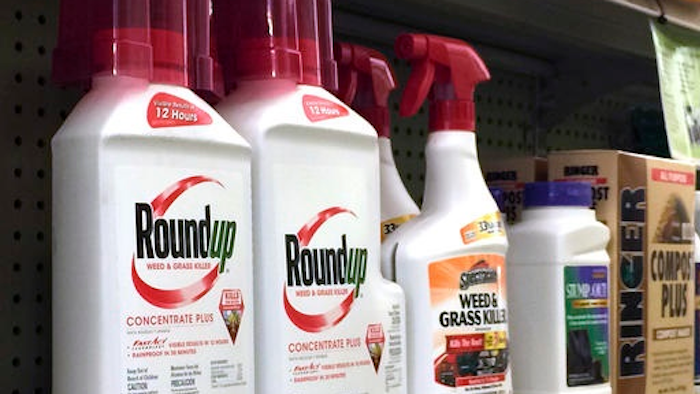 FRESNO, Calif. (AP) — A battle over the main ingredient in Roundup, a popular weed killer sprayed by farmers and home gardeners worldwide, is coming to a head in California, where officials want to be the first to label the chemical with warnings that it could cause cancer.

Monsanto rejects any health risk of its top-selling herbicide. The chemical giant sued the nation's leading agricultural producer to block the labels, arguing that the state unconstitutionally stakes its claims on an international health organization based in France.

California will ask a Fresno judge on Friday to dismiss the case so it can move forward with the warnings, drawing support from heavyweights including environmental attorney Robert Kennedy Jr. and the United Farmworkers.

Teri McCall says her husband toted a backpack of Roundup for more than 30 years to spray weeds on their 20-acre avocado and apple farm. Jack McCall died of cancer in late 2015, and his widow believes a warning would have saved his life.

"I just don't think my husband would have taken that risk if he had known," said Teri McCall, one of dozens nationwide who are suing Monsanto, claiming the chemical gave them or a loved one cancer.

Critics take issue with Roundup's main ingredient, glyphosate, which has no color or smell. Monsanto introduced it in 1974 as an effective way of killing weeds while leaving crops and plants intact.

It's sold in more than 160 countries, and farmers in California use it on 250 types of crops.

The chemical is not restricted by the U.S. Environmental Protection Agency, which says it has "low toxicity" and recommends people avoid entering a field for 12 hours after it has been applied.

But the International Agency for Research on Cancer, a Lyon, France-based branch of the U.N. World Health Organization, classified the chemical as a "probable human carcinogen."

Shortly afterward, the most populated state took its first step in 2015 to require the warning labels.

St. Louis-based Monsanto contends in court papers that California is delegating its authority to an unelected foreign body with no accountability to officials in the U.S. or state in violation of the California Constitution.

Attorneys for California consider the International Agency for Research on Cancer the "gold standard" for identifying carcinogens, and they rely on its findings along with several states, the federal government and other countries, court papers say.

Monsanto also says placing the labels on Roundup would lead to consumers' unfounded fears and drive them to less safe and effective alternatives. Spokeswoman Charla Lord said she could not estimate the potential financial harm to the company.

"Glyphosate is a vital tool," Lord said in a statement. "Our goal is to minimize any disruption to farmers in the state."

California regulators are waiting for the lawsuit to be resolved before deciding whether to require warnings, said Sam Delson, a spokesman for the state Office of Environmental Health Hazard Assessment.

Kennedy, who represents McCall's widow, questions Monsanto's staunch objection to the labels because the state is not trying to ban the weed killer.

"People have a right to know what the risks are when they use Roundup," said Kennedy, a longtime adversary of Monsanto and son of Robert F. Kennedy. "It's almost strange that a corporation would be fighting so hard."

Farmer Paul Betancourt has been using Roundup for more than three decades on his almonds and cotton crops and says he does not know anyone who has gotten sick from it.

Still, he provides his crew with gloves and respirators and trains them how to correctly handle it. Betancourt said he doesn't know of an alternative that would work better.

"You've got to treat it with a level of respect, like anything else," he said. "Gasoline will cause cancer if you bathe in the stuff."