Can My Employer Fire Me for Legally Using Marijuana? 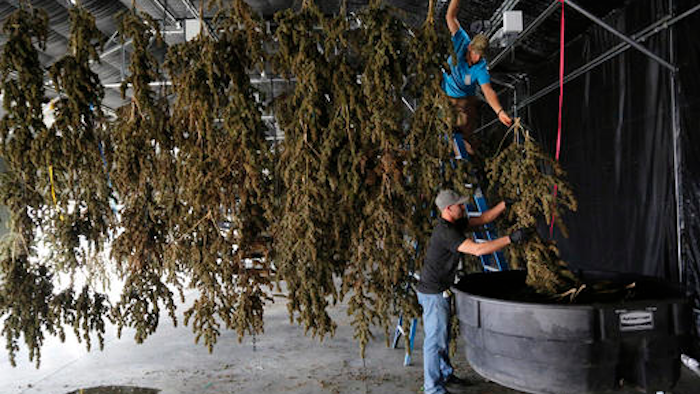 In this Oct. 4, 2016 file photo, farm workers inside a drying barn take down newly-harvested marijuana plants after a drying period, at Los Suenos Farms, America's largest legal open air marijuana farm, in Avondale, southern Colo. Newly-approved laws in four states allowing the recreational use of marijuana are seen as unlikely to change rules regarding use of the drug in the workplace.
AP Photo/Brennan Linsley, File

BOSTON (AP) — For now, many employers appear to be sticking with their drug testing and personal conduct policies, even in states where recreational marijuana use is now permitted. Others are keeping a close eye on the still evolving legal, regulatory and political environment.

Voters in California, Massachusetts, Maine and Nevada voted Nov. 8 to approve the use of recreational marijuana, joining Colorado, Washington, Oregon and Alaska, where it had previously been legalized. (A recount of Maine's close result is scheduled.) More than two dozen states have medical marijuana programs.

But the drug is still against federal law.

A closer look at what it all means for workers and businesses:

Can My Employer Still Test Me for Pot?

Bottom line: You can't come to work high. You can still be drug tested. And you can still be fired — or not hired — for failing a drug test even if you're not the least bit impaired at work.

All the states with legalized recreational pot have exemptions for workplace drug policies.

In Massachusetts, for example, the law includes language stating that "the authority of employers to enact and enforce workplace policies restricting the consumption of marijuana by employees" is not changed.

"Yes, you may be able to have (marijuana) at home, but that doesn't mean it's OK in the workplace," said Edward Yost, an HR specialist with the Society for Human Resources Management.

What About Workplace Safety?

Advocates for marijuana legalization said it was never their intention to compromise safety, a central reason offered by employers for drug testing.

"We don't want anyone to come to work impaired on any drugs," said David Boyer, campaign manager for the ballot initiative in Maine.

A 2013 survey by the employee screening firm HireRight found 78 percent of employers conducted drug tests either randomly, as a condition of employment, after accidents or for some combination of those reasons.

The federal government requires drug testing for some workers, including truck drivers and others in transportation.

Quest Diagnostics, which performed nearly 11 million laboratory-based drug tests for employers in 2015, said the percentage of tests coming back positive has shown a modest increase in recent years. Nearly half of all positive tests showed evidence of marijuana use.

Can I Get Fired Even If I'm Not High?

THC, the psychoactive chemical in cannabis, can stay in a person's system for days or even weeks, experts say — long after the buzz has subsided.

"It's the equivalent of firing somebody who drank a glass of wine on Friday evening and then came to work on Monday," said Tamar Todd, legal director for the Drug Policy Alliance, who believes employers should reconsider zero-tolerance policies in light of changing laws and attitudes.

A number of efforts are underway to develop an accurate method, akin to the Breathalyzer for alcohol, to measure actual marijuana impairment. Such a test might be useful not only for employers, but also for police and prosecutors trying to determine what constitutes driving under the influence of marijuana in states where recreational pot is legal.

What Should Companies Do?

At a minimum, companies should review their current polices, make sure their managers are trained and make clear to employees that marijuana use on or off the job can still land them in trouble, said James Reidy, a New Hampshire-based attorney who advises clients around the country on drug testing issues.

Tina Sharby, chief human resources officer for an Easter Seals affiliate with about 1,700 employees in New England, said the organization, which provides services for people with special needs, is monitoring the evolving legal and regulatory environment but is sticking with its drug testing protocols for now.

"We have a drug-free workplace policy, and we believe that the current policy we have is effective," Sharby said.

But drug testing and zero-tolerance rules can also make it difficult for businesses with a need to recruit young professionals who may harbor more liberal attitudes toward pot.

"We have ski industries out here, and if they really took a hard line on marijuana use, they would have to shut down," said Curtis Graves, information resource manager for the Colorado-based Mountain States Employers Council.

After Colorado became the first state to legalize recreational marijuana in 2012, surveys showed an uptick in workplace drug testing, Graves said, but that trend has begun to shift in the other direction.

"Employers who have a zero-tolerance policy maybe shouldn't apply that to non-safety sensitive workers, because if they do testing on them, they run the risk of inviting an invasion of privacy claim," suggested Amanda Baer, a Boston-area attorney who specializes in labor and employment issues.

What Do the Courts Say?

Adding to the uncertainty is the scarcity of legal precedent in states that have legalized recreational marijuana. But several cases involving employees with permits to use medical marijuana have reached the courts, and most have been decided in employers' favor.

The most widely cited case is a 2015 Colorado Supreme Court that upheld Dish Network's firing of a disabled man who used medical marijuana and failed a drug test. The court ruled that a state law barring employers from firing workers for off-duty behavior that is legal did not apply because pot remains illegal under federal law.

Similar rulings have been issued in other states including California, Montana and Washington.

As medical marijuana programs become more common even in states where recreational pot remains outlawed, some companies have begun to weigh accommodations for workers with permission to use marijuana for an existing health condition.