Mexican police are providing stepped-up security for a PepsiCo subsidiary targeted by firebomb attacks over the weekend, official said Tuesday. About one hundred state and federal police are guarding the distribution centers of Sabritas, a Mexican snack firm owned by PepsiCo, said Julio Hernandez, a spokesman for western Michoacan state. 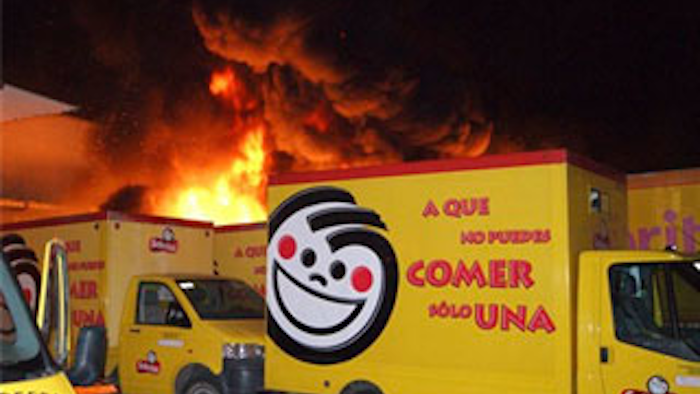 About one hundred state and federal police are guarding the distribution centers of Sabritas, a Mexican snack firm owned by PepsiCo, said Julio Hernandez, a spokesman for western Michoacan state.

Hernandez said the attacks could further hurt investment in the state, considered the home turf of the Knights Templar drug cartel.

"There will be effects on investment," Hernandez said. "In fact, private investment, both foreign and domestic, has been stalled in recent years. There hasn't been any."

Hernandez said it appears a drug gang was involved in the attacks that burned dozens of Sabritas delivery trucks and damaged buildings at five distribution centers in Michoacan and the neighboring state of Guanajuato.

Zamarripa said one of the suspects suggested the company was attacked as part of an extortion scheme, but didn't know for sure. The suspects said they were simply ordered to burn Sabritas delivery trucks.

Mexican drug cartels frequently earn extra money by demanding protection payments from small business operating in cities they control. But the cartels have never systematically targeted a transnational firm in such attacks.

Francisco Merino, the vice president of Sabritas-PepsiCo, told local media Tuesday that company officials knew of no such demands for protection payments.

The four suspects detained in Guanajuato showed how diversified the cartels' criminal activities have become; prosecutors say they carried out carried out killings, kidnappings, drug sales, extortion, loan sharking and demanding payments from street vendors and vendors of pirated goods.

In the Gulf Coast state of Veracruz, authorities say soldiers killed 12 gunmen in a clash Tuesday in the town of Emiliano Zapata, near the capital Xalapa.

Veracruz state prosecutors said in a statement that the gunmen opened fire on the troops and the soldiers returned fire, killing the 12.

Veracruz state, a strategic smuggling state with a giant gulf port, is the site of a fight between the Zetas drug cartel and the New Generation, a cartel based in the western state of Jalisco and allied with the powerful Sinaloa cartel, which is led by kingpin Joaquin "El Chapo" Guzman.