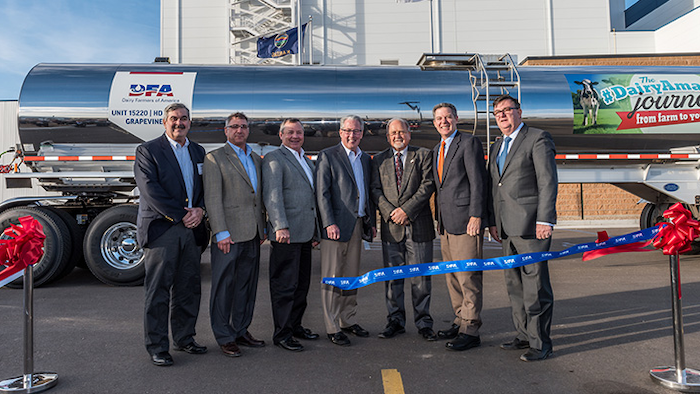 DFA Garden City is a partnership between DFA and 12 of its member farms in Southwest Kansas and will help support the industry’s continued growth in the region, as well as meet rising demand for U.S. dairy both domestically and globally.

“As a Cooperative owned by family farmers, we are always looking for opportunities to help grow the dairy industry and provide value to our dairy farmer-owners,” says Rick Smith, president and chief executive officer at DFA. “This investment not only fills an important need for the region by providing a local home for DFA members’ milk, which was previously being transported to other areas of the country, but it also supports and enhances our global ingredients strategy, which benefits all our farmer members.”

“Dairy is a growing and thriving industry for the state of Kansas,” says Gov. Sam Brownback (R-Kan.). “With this new plant, Kansas will play an even bigger role in helping to feed the world.”

Construction started on the Garden City facility in October 2015, and the first load of milk was delivered in late September 2017. The plant, which has brought 66 new jobs to the area, produces whole and skim milk powder, nonfat dry milk powder and cream, and receives approximately 4 million pounds of milk a day from regional farms.

“As a farmer invested in this plant, it’s exciting because we’re connecting our family farms to family tables in a truly sustainable and traceable way,” says Kansas dairy farmer Dan Senestraro, who also serves on the Board of Directors for DFA. “This plant allows us to trace the product from the time it leaves the farm as raw milk to the time it arrives at the store, which is important to many consumers today.”

Beyond the traceable aspects of the product, DFA Garden City also focuses on sustainability, including operating as a water-neutral facility. With this process, all the water utilized at the plant is recycled and ultimately used to water landscaping and parks throughout the city.

During the open house ceremony and ribbon cutting, representatives from DFA were joined by Gov. Sam Brownback and Garden City Mayor Melvin Dale to mark the official opening of the state-of-the-art dairy ingredients facility. Rick Smith and DFA Chairman of the Board Randy Mooney thanked those individuals who have been instrumental in the plant’s development, including the 12 DFA farm family owners and members who invested in the facility.

Dairy Farmers of America (DFA) is a national dairy marketing cooperative that serves and is owned by more than 13,000 members on nearly 8,000 farms in 48 states. DFA also is one of the country’s most diversified manufacturers of dairy products, food components and ingredients, and is a leader in formulating and packaging shelf-stable dairy products. For more information, call 1-888-DFA-MILK (332-6455) or visit dfamilk.com.