Besides weaker volume sold in Q3, McDonald's raised questions earlier Monday about its relationship with Beyond Meat. 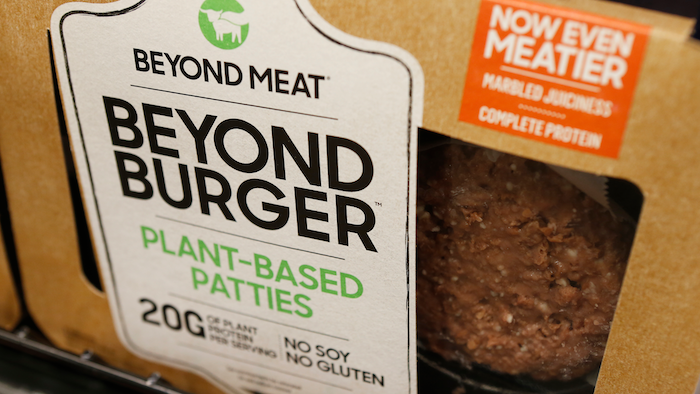 Beyond Meat's stock plummeted Monday after company executives struggled to explain the company's weaker-than-expected third quarter sales and answer questions about whether it will make plant-based burgers for McDonald's.

Beyond Meat's shares, already down 4% when the markets closed Monday due to the confusion over McDonald's, plummeted 22% in after-hours trading following the release of the earnings report.

El Segundo, California-based Beyond Meat said it felt the full force of the coronavirus pandemic in the third quarter that ended Sept. 26. Consumer stockpiling in the second quarter, coupled with continuing struggles at restaurants and other food service customers, made demand unpredictable, the company said.

On top of that, McDonald's raised questions earlier in the day about its relationship with Beyond Meat. During an investor day presentation, McDonald's said it's planning to test a plant-based burger, McPlant, that it's developing with a supplier. But it wouldn't say whether Beyond Meat is that supplier.

McDonald's tested a Beyond Meat burger in Canada earlier this year, and Beyond Meat President and CEO Ethan Brown insisted that his company continues to work with McDonald's on the McPlant.

“'We're working closely with them on a number of matters,” he said. “Folks will have to continue to be patient.”

But Brown also said Beyond Meat would resist any effort not to put its own brand name on menus, including those at McDonald's.

“The brand we have deserves to be up there on the menu," Brown said. “I really need to leave it to them to make further comments about how we plan to interact with McPlant.”

Losing a chain with the scale of McDonald's, which has more than 37,000 restaurants worldwide, would be a major blow to Beyond Meat.

Brown said U.S. retail sales of Beyond Meat slowed in the July-September period despite increased availability in stores. Brown said a surge in retail sales in the second quarter was likely the reason.

“Freezers were full in homes across the country,” he said.

When people did buy Beyond Meat, they paid less for it, as the company offered bigger packages and deals. Customers paid an average of $5.33 per pound for Beyond Meat products, down from $5.74 per pound in the same quarter a year ago, Chief Financial Officer Mark Nelson said.

At the same time, Beyond Meat said sales to restaurants and other venues continue to struggle. Beyond Meat said two-thirds of its food-service customers are independent restaurants, convention centers, universities and other places that have curtailed their buying. Only one-third are fast food restaurants, which have withstood the pandemic more easily thanks to drive thru windows.

Beyond Meat said its total food-service net revenue fell 41% in the third quarter.

Its revenue rose 2.7% to $94.4 million. That was far short of the $132 million that Wall Street forecast, according to analysts polled by FactSet.

Beyond Meat reported a net loss of $19.3 million for the quarter. Adjusted for one-time items, the company lost 28 cents per share. Analysts had forecast a 5 cent per share profit.

From ube cakes to mochi muffins, bakeries that sweetly encapsulate growing up Asian and American have been popping up.
Aug 25th, 2021

In Thailand, kratom leaves typically would be chewed to give the user a mild energy boost.
Aug 24th, 2021
Follow Us
Most Recent