The National Restaurant Association warns the coronavirus outbreak could cost five to seven million jobs and hundreds of billions in losses. 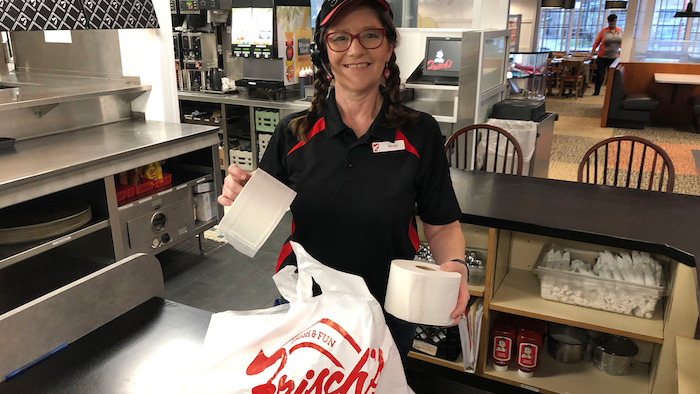 In this photo made on March 20, Frisch's Big Boy restaurant employee Nicole Cox bags up an order of toilet paper, among in-demand items including milk and bread the double-decker burger chain is now offering during the coronavirus outbreak in Cincinnati, OH.
AP Photo/Dan Sewell

CINCINNATI (AP) — In the battle to keep their New York City restaurant going despite sharp restrictions during the coronavirus outbreak, the owners of Il Posto Accanto are relying on something Beatrice Tosci would have considered sacrilege in normal times.

However, with New York as the U.S. epicenter of the contagion and under self-quarantining edicts, she and husband Julio Pena have little choice but to package up their traditional Italian cooking, such as meatballs and pasta, and send them out.

Across the United States, restaurateurs are transforming operations to try to stay afloat. The National Restaurant Association warns the outbreak could cost 5 million to 7 million jobs and hundreds of billions in losses and is pushing for a special federal relief package for restaurants.

In an industry of traditionally tight profit margins, some decided it's time to take chances. 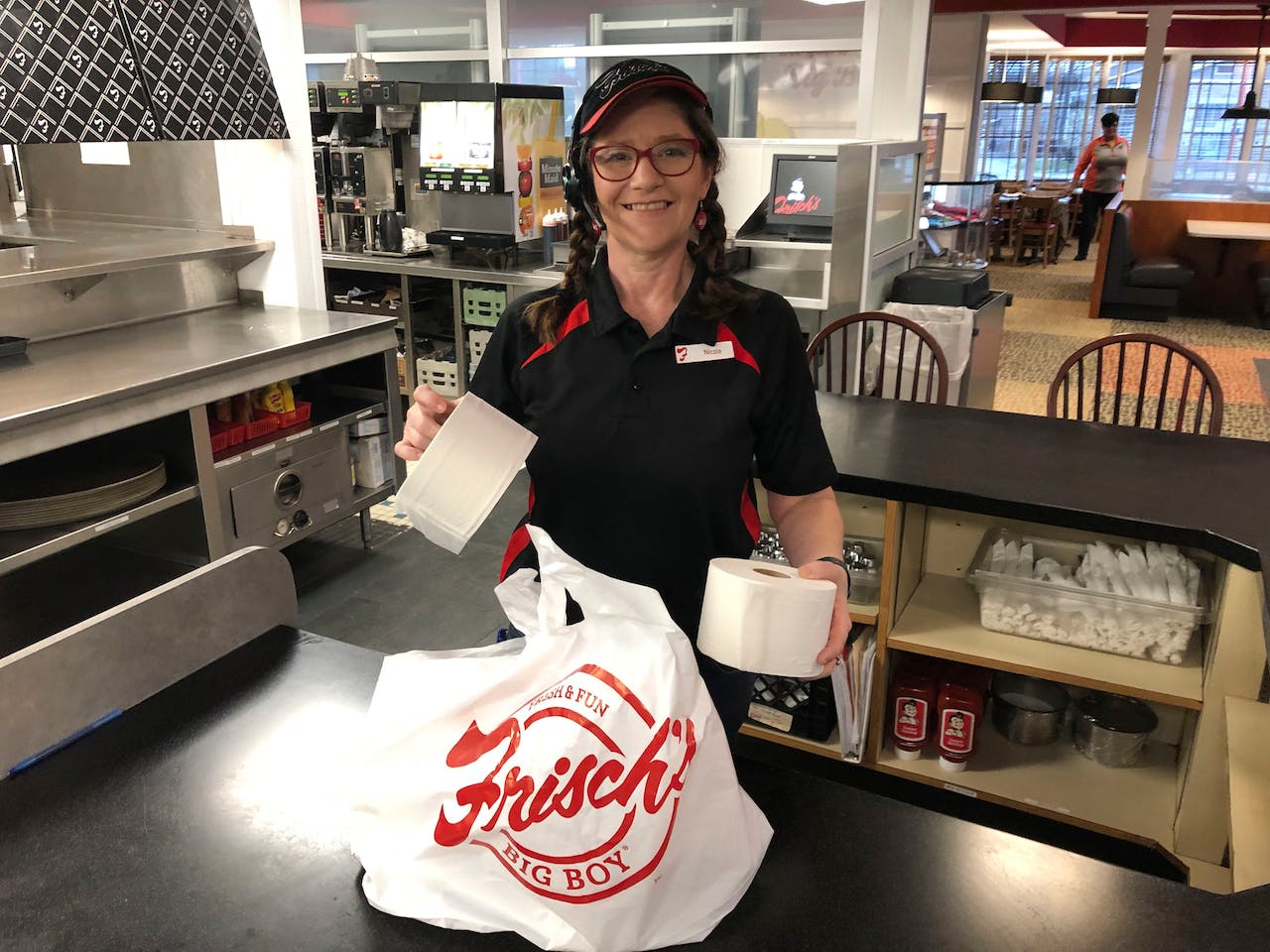 In this photo made on March 20, Frisch's Big Boy restaurant employee Nicole Cox bags up an order of toilet paper, among in-demand items including milk and bread the double-decker burger chain is now offering during the coronavirus outbreak in Cincinnati, OH.AP Photo/Dan SewellFrisch's Big Boy restaurants, a Cincinnati-based chain that laid off more than a third of its 5,000 employees in the first days of bans on in-restaurant dining, last week pivoted into the grocery business. Besides its signature Big Boy double-decker burgers and onion rings, customers at its 100 restaurants in Ohio, Indiana and Kentucky can buy bread, milk and and produce at its drive-thrus and carryout counters and via home delivery.

Frisch's saw a quick jump in revenues at a time when people have been frustrated by long lines and shortages at traditional supermarkets. Toilet paper is in high demand, and Frisch's and others are using it as a lure.

Westmont Diner in Westmont, New Jersey, has added it to carry-out options at 60 cents a roll, along with paper towels, soap, bleach and other household needs. Lindey's in Columbus, Ohio, throws in a free roll with all takeout orders. Frontier in Chicago gave out decks of cards to homebound customers with their carryout dinners.

With the number of states with stay-at-home orders growing, some restaurateurs decided to shut down. Cameron Mitchell, based in Columbus, said carryout offerings weren't bringing in enough business to keep his namesake chain of 36 restaurants in 12 states going. More than 4,000 employees were laid off last week.

Some fine-dining restaurants unused to carryout are trying scaled-down menu at bargain prices. 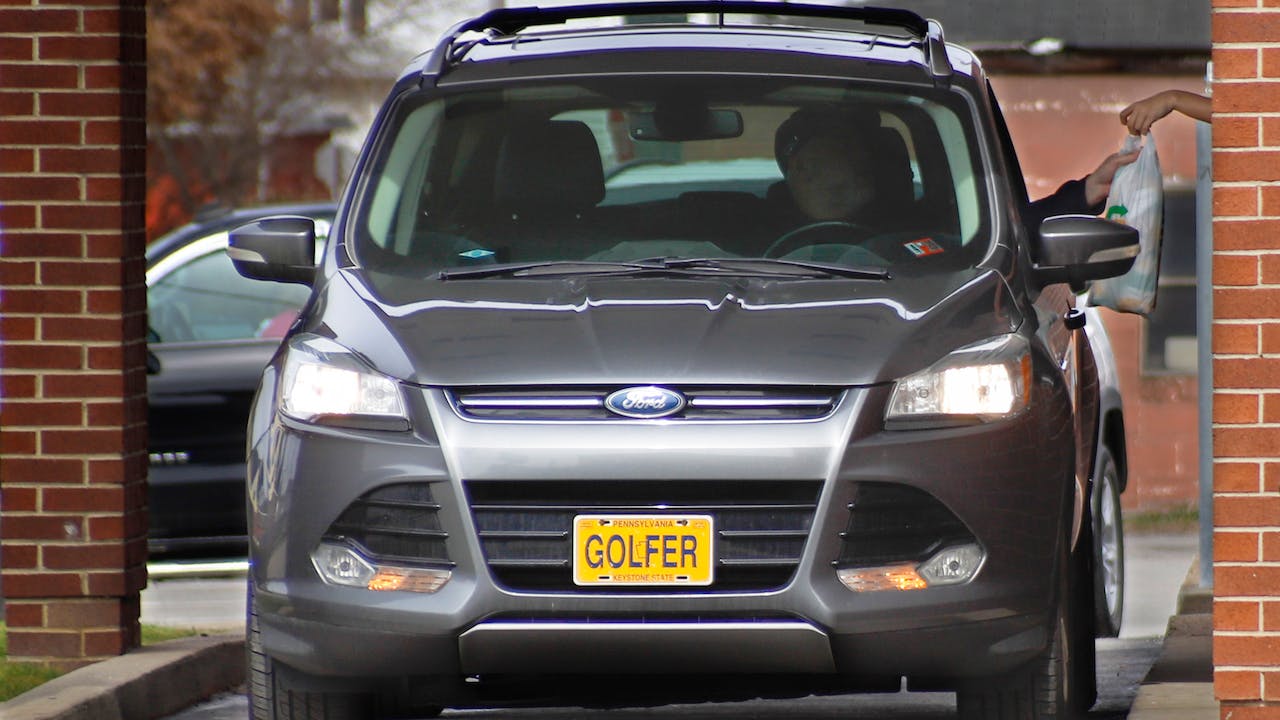 A patron picks up a sandwich from a drive-thru window at a shop where the indoor dining area is closed in efforts to slow the spread of COVID-19 on Wednesday, March 18 in Evans City, PA.AP Photo/Keith SrakocicIn Chicago, patrons can now carry out food for a fraction of the typical dine-in tab at Alinea, where nabbing a seat typically requires reservations weeks in advance and dinners can cost as much as $395 per head. Alinea now offers takeout meals of beef wellington, mashed potatoes and creme brulee for $39.95, and reports strong sales so far.

Meanwhile, in Los Angeles, Mayor Eric Garcetti said Monday that with Californians under a stay-home edict, restaurants are allowed to deliver alcoholic beverages along with meals to boost their revenues and well, because booze.

Sitting in the nearly empty Frisch's “Mainliner” restaurant where the chain originated in suburban Cincinnati in 1942, CEO Jason Vaughn said customers at the privately held chain's 100 restaurants have asked for additions, such as bottles of orange juice, quarts of soup and coffee for home. Frisch's is trying to leverage its supply chain to accommodate requests.

Vaughn predicts the crisis will change the industry.

“People have changed habits,” Vaughn said. “When the green light goes on, we don't expect to come back as status quo ... when we go to whatever that new norm is, we'll see if we can continue it (groceries) if it's a service the community wants.”

At Il Posto Accanto, Tosti worries about potential monthslong restrictions. The restaurant that dates to 1995 is down to 10 employees, from 14 before it.

“Too many,” she said of how much they have worked since the restrictions put in place last week.

“Nine days," she reflected. "It feels like nine years.”