Meal kit companies face an ultimatum: Adapt or die. The struggle intensified Monday, when Blue Apron announced that it could be delisted from the New York Stock Exchange because its closing share price has been lower than $1 since early May. 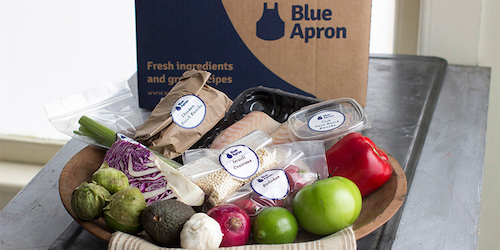 FILE - This Oct. 6, 2014, file photo shows an example of a home delivered meal from Blue Apron, in Concord, N.H. On Wednesday, June 28, 2017, Blue Apron, the meal-kit delivery company, slashed the price it expects to sell its shares by as much as 40 percent, a sign that the company may be having trouble attracting investors. (AP Photo/Matthew Mead, File)

The business is still in its infancy, with the biggest players — Blue Apron and HelloFresh — less than a decade old. But they're facing serious challenges from restaurant and grocery delivery services, smaller niche players and even home chefs.

The struggle intensified Monday, when Blue Apron announced that it could be delisted from the New York Stock Exchange because its closing share price has been lower than $1 since early May. The company's share price closed down 8% Monday to 68 cents.

New York-based Blue Apron said it will try to raise its stock price with a reverse stock split, which will be subject to a vote of its shareholders at the company's annual meeting on June 13.

Subscription-based meal kit companies face numerous problems. For one, they appeal to a small population. NPD Group, a consulting firm, estimates that just 4% of U.S. consumers have tried them.

It also costs a lot for companies to prepare, package and ship fresh ingredients, so meal prices are high. And once kits arrive, subscribers still have to put the ingredients together.

"Meal kits are a more expensive but less convenient option for busy people who do not have time to cook," said Cara Brosius, a market research analyst with Packaged Facts.

Brosius said meal kit customers have also complained about limited menu selection, poor quality of ingredients and too much packaging.

Blue Apron hasn't made a profit since its 2017 IPO. It's been losing customers, who quickly tire of its relatively high prices — $9.99 per serving for a two-person plan — as well as its subscription plan, which forces them to be less spontaneous. Blue Apron's customer base fell 25% to 557,000 between 2017 and 2018.

Others have struggled. Meal kit company Chef'd closed its doors last July. And some have been swallowed up. Albertons grocery chain, for instance, acquired the Plated brand in 2017 while Kroger acquired Home Chef last year.

Darren Seifer, a food industry analyst with the consulting firm NPD Group, said the meal kit market feels like the dot-com boom of the late 1990s.

"It's a very crowded space, with a lot of companies not paying too much attention to the bottom line," he said. He expects consolidation, which is already happening. HelloFresh bought organic meal kit provider Green Chef last year, for example.

Packages Facts says the U.S. meal kit market grew 22% to $3.1 billion in 2018, but it expects that growth to decelerate over the next five years because of competition. UberEats, for example, will deliver a restaurant meal for $3.99 plus a service fee. Chefs for Seniors promises a visit from an in-home chef, 12 meal servings and clean-up for $99 plus groceries.

Seifer said there is a place for subscription-based meal plans. They have a lot of appeal for people with specific dietary needs, he said.

But he thinks the most successful companies will also branch out into grocery stores or delivery, offering on-demand meal kits. Seifer's research has shown that up to 60% of Americans don't know what's for dinner at 4:30 p.m. They want easy options they can pick up on their way home.

In a report on the industry late last year, Packaged Facts suggested other opportunities for growth. Some companies are specializing in niche diets. Purple Carrot, for example, serves vegans and targets athletes through its partnership with Tom Brady. One Potato designs its meals for families with kid-size portions.

Meal kit companies could also focus on on-demand delivery instead of subscription services, and on special-occasion meals, like Thanksgiving or Valentine's Day, when consumers are looking for help and inspiration.

5 Food Brands Among 25 Most Trusted

Flying to remote parts of the state can be expensive, but Papa Murphy’s partners with airlines to minimize shipping costs.
Associated Press
Jan 17th, 2020

The robot, which resembles an assembly line, can churn out 300 12-inch pies in an hour.
Rachel Lerman
Joseph Pisani
Jan 9th, 2020

Hershey to Retire its 'Kissmobile'

It's made up of three giant Hershey Kiss candies anchored to a 26-foot chassis.
Jan 8th, 2020

A diet that forbids eating for hours on end might seem doomed in a culture where food is constantly available, but apps and groups are popping up for people practicing 'intermittent fasting.'
Candice Choi
Jan 6th, 2020

Should You Avoid Meat for Good Health?

More than half of Americans who make New Year’s resolutions resolve to “eat healthier.” If you’re one, you might be confused about the role meat should play in your health.
Dariush Mozaffarian
Dec 27th, 2019

It's got nearly twice the caffeine of regular Pepsi.
Dec 16th, 2019

Here’s a look at Roger Johnson’s thoughts on agriculture and the future of farming.
James MacPherson
Dec 16th, 2019