'Ugly Produce' Trend May Have Limits, as Grocers End Tests

Is the "ugly produce'" trend already reaching the end of its shelf life in supermarkets?

URBANDALE, Iowa (AP) — Is the "ugly produce'" trend already reaching the end of its shelf life in supermarkets?

Walmart and Whole Foods in recent years tried selling some blemished fruits and vegetables at a discount, produce they said might otherwise be trashed because it's not quite the right size, shape or color. But the two chains and others quietly ended their tests, suggesting dented apples and undersized potatoes may not be all that appealing in stores where better looking fruits and vegetables are on display.

"Customers didn't accept it as much as we had hoped," said Mona Golub of Price Chopper, a grocery chain in the Northeast that also discontinued its offering of ugly produce.

Still, some stores and home delivery startups haven't given up on the idea of selling less-than-perfect produce to reduce food waste and say they're doing well.

At a Hy-Vee store in Iowa, a recent display of "Misfits" produce included packs of apples, lemons and oranges that were either too big or small, or otherwise substandard in appearance. A sign explained that "6 million pounds of fresh produce goes unused each year," though the packages didn't specify why the produce might have otherwise been thrown away.

"I like the cost savings and it is good to help and not throw so much away," said shopper Brian Tice, who bought a pack of small oranges.

Another shopper, Jamie Shae, said she didn't realize there was anything special about the fruit

"I happened to see the bags of lemons," said Shae, who was in a rush and grabbed two bags.

Shopper Joan Hitzel, who was browsing other produce nearby, said she thought the Misfits were a good idea given the tons of food that gets thrown away, but didn't plan to buy any that day. 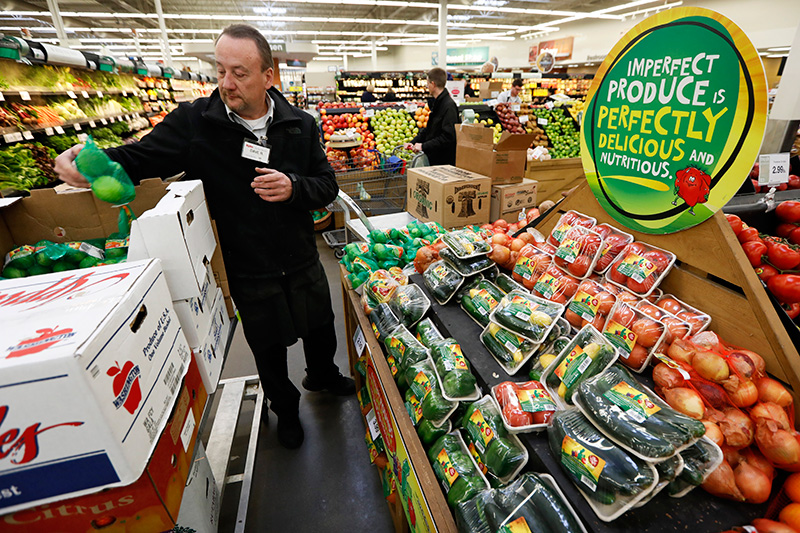 In this Friday, Jan. 18, 2019, photo, assistant produce manager Dave Ruble stocks the imperfect produce section at the Hy-Vee grocery store in Urbandale, Iowa. After enjoying a brief spotlight in supermarket produce sections, blemished fruits and vegetables may already be getting tossed back in the trash. (AP Photo/Charlie Neibergall)

The supplier of the Misfits produce to supermarkets, Robinson Fresh, said about 300 grocery locations still sell the fruits and vegetables, including the Hy-Vee stores. Kroger also said it still plans to introduce its "Pickuliar Picks" this spring.

But among other regional chains that have stopped carrying ugly produce are Meijer in the Midwest, Hannaford based in Maine and Pittsburgh-based Giant Eagle, which cited "inconsistent customer interest" for pulling the plug on its "Produce with Personality."

Walmart no longer offers the damaged "I'm Perfect" apples it introduced in Florida in 2016.

The efforts channeled growing interest in reducing food waste. Government agencies say the best way to reduce waste is to stop producing too much food. The U.S. Department of Agriculture estimates that 31 percent of the 430 billion pounds of the nation's food supply goes uneaten. That does not include the fruits and vegetables that get tossed at the farm level, before foods reach stores.

For fruits and vegetables that don't meet supermarket standards, some may get processed for products like juices and some go to food banks. Startups delivering ugly produce say there's so much they're not taking from food banks.

Shopper preferences may not be the only challenge for ugly produce in supermarkets.

"Retailers really prize their produce sections," said Imperfect Produce CEO Ben Simon, whose company had partnered with Whole Foods on a test at the chain. Grocers might worry that cheaper produce will cannibalize sales of regular produce, or give off a bad image, he said.

Delivery startups say they're seeing interest in their services. But they are up against shoppers who inspect the fruits and vegetables they buy and those who worry about all the packaging.

"I've been food shopping online, and I started thinking about all the boxes, all that cardboard," said Nyasha Wilson, a New York City resident who carefully selects apples for ripeness at a farmer's market.

The companies say they might at least change shoppers' views on discarded produce. Evan Lutz, CEO of the startup Hungry Harvest, said most of it is just too small or slightly discolored.

"The vast majority that would go to waste isn't really that ugly," he said.

The company expects at-home food demand will remain elevated in Q4 as feedings at restaurants, schools and universities will be down.
Mike Hockett
Mar 19th, 2020

Meat companies are making it easier for you to eat your vegetables by blending them into burgers, meatballs and sausages.
Dee-Ann Durbin
Mar 16th, 2020

The benefits of pickle juice have been touted in recent years as a credible sports drink alternative.
GlobalData
Mar 11th, 2020

Consumer Prices Up in February on Food Costs

Inflation has been mild since the Great Recession ended more than a decade ago, and Wednesday’s figures indicate that hasn’t changed.
Christopher Rugaber
Mar 11th, 2020

Prices jumped 21.4% over a year, adding to pressure on communist leaders who are trying to revive economic activity.
Associated Press
Mar 10th, 2020

Stockpiling is expected to last for weeks, resulting in a boon for discounters and grocery stores as well as food delivery services, while also introducing logistical headaches.
Anne D'Innocenzio
Mar 6th, 2020

Tito's: Don't Use Our Vodka As Hand Sanitizer

Constellation Brands has released a statement to suppress misinformation regarding some consumers' misperceived link between its beer brand Corona and the ongoing coronavirus.
Mike Hockett
Mar 2nd, 2020

The big question is, do you burn them together, or separately?
Eric Sorensen
Anna Wells
Mar 2nd, 2020