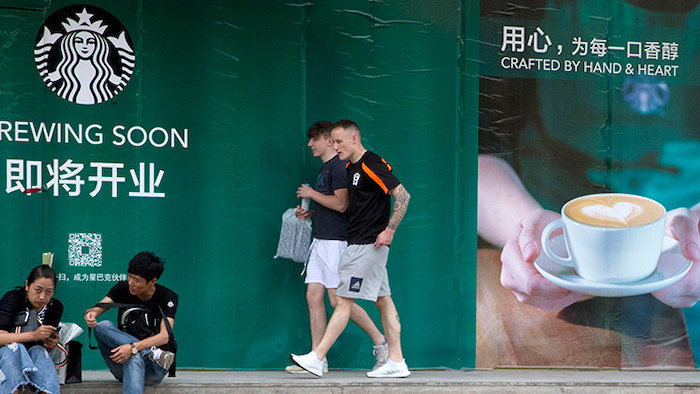 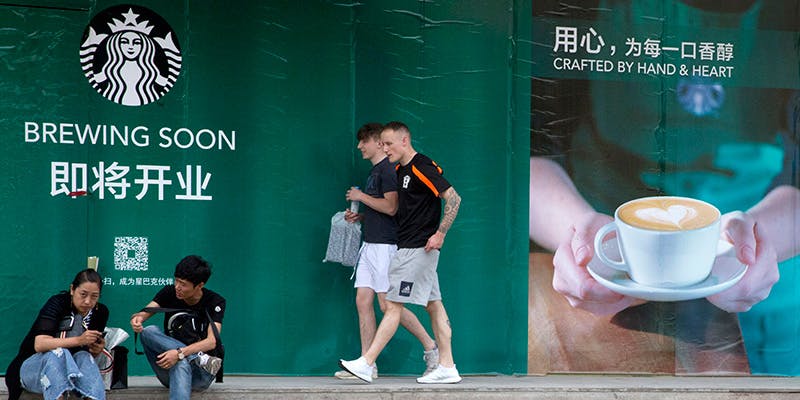 In this photo taken Wednesday, May 16, 2018, foreigners walk past a man and woman outside a Starbucks outlet under construction in Beijing, China. Starbucks and Chinese e-commerce giant Alibaba Group announced a coffee delivery venture on Thursday, Aug. 2, 2018, that adds to growing competition in China's booming delivery industry. (AP Photo/Ng Han Guan)

Starbucks Coffee Co. and Alibaba Group Holding Ltd. said the venture starts next month in Beijing and Shanghai. It will expand to 30 cities by the end of the year.

Its venture with Alibaba mimics Luckin Coffee, a Chinese upstart that opened this year and is challenging Starbucks by delivering coffee ordered over a mobile phone app.

"In some ways this is rocket fuel for our digital flywheel strategy in China," Starbucks CEO Kevin Johnson said at a press conference in Shanghai.

Starbucks, which opened its first mainland China location in 1999, has 3,400 outlets in 140 Chinese cities but faces intense competition. The company said in its latest quarterly results Chinese sales declined 2 percent.

Alibaba is the world's biggest e-commerce company by total value of the merchandise sold across its platforms. The bulk of those sales are business-to-business, but the company is increasingly expanding into consumer-oriented services.

The companies said their partnership will give Starbucks access to Alibaba's consumer platforms including food delivery service Ele.me and online supermarket Hema.

"We are breaking the physical and virtual barriers between the home, office, in-store and digital space," the CEO of Starbucks China, Belinda Wong, said in a statement.