Millennials and Organic: A Winning Combination

America's 75 million Millennials are devouring organic, and they're making sure their families are too. Parents in the 18- to 34-year-old age range are now the biggest group of organic buyers in America, finds a new survey on the organic buying habits of American households released recently by the Organic Trade Association. 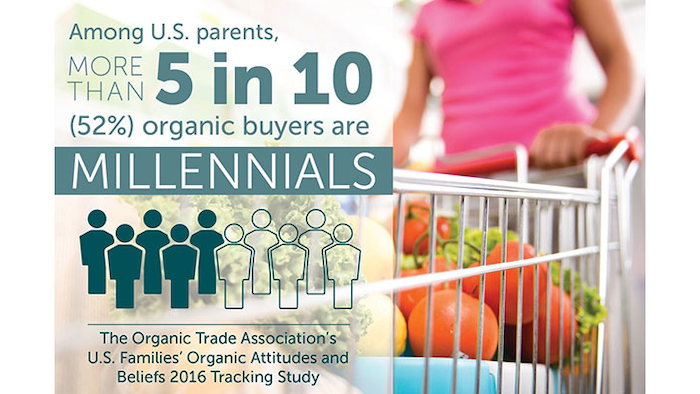 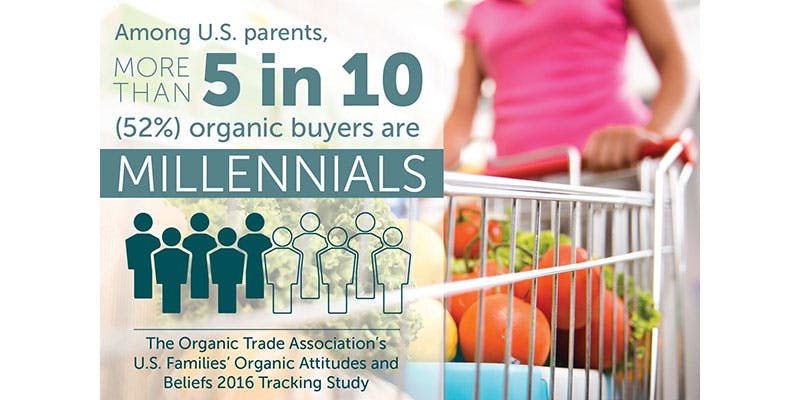 WASHINGTON (PRNewswire-USNewswire) — America's 75 million Millennials* are devouring organic, and they're making sure their families are too.  Parents in the 18- to 34-year-old age range are now the biggest group of organic buyers in America, finds a new survey on the organic buying habits of American households released recently by the Organic Trade Association (OTA).

Among U.S. parents, more than five in 10 (52 percent) organic buyers are Millennials. And this influential and progressive generation is stocking their shopping carts with organic on a regular basis.

"The Millennial consumer and head of household is changing the landscape of our food industry," said Laura Batcha, CEO and Executive Director of the Organic Trade Association. "Our survey shows that Millennial parents seek out organic because they are more aware of the benefits of organic, that they place a greater value on knowing how their food was grown and produced, and that they are deeply committed to supporting a food system that sustains and nurtures the environment."

OTA has partnered with KIWI Magazine to conduct surveys of the organic buying patterns of households since 2009. This year's survey marks the first time that generational buying habits have been studied. The survey looked at Millennials (born between 1981-1997, currently age 18-34 years),  Generation-X  (born between 1965-1980, currently 35-50 years old), and Baby Boomers (born between 1946-1964 and currently 51-69 years old).

Compared to Millennials who account for 52 percent of organic buyers, Generation X parents made up 35 percent of parents choosing organic, and Baby Boomers just 14 percent.

OTA's U.S. Families' Organic Attitudes and Beliefs 2016 Tracking Study, a survey of more than 1,800 households throughout the country with at least one child under 18, found that more than eight in ten (82 percent) U.S. families say they buy organic sometimes, one of the highest levels in the survey's seven-year lifetime.  The number of families never buying organic has steadily decreased, going from almost 30 percent in 2009 to just 18 percent today.

Organic buying continues to be on the rise across the generations. Forty-nine percent of all households surveyed said they are buying more organic foods today than a year ago.

Knowledge about organic is also growing across the generational spectrum of parents, but Millennials in particular are likely to view themselves as very knowledgable about organic products, with nearly 8 in 10 (77 percent) reporting that they are "well informed" (34 percent) or "know quite a bit" (44 percent). With that knowledge comes a great deal of trust for the organic label. Parents' trust in organic labeling is the strongest and highest among Millennials, with 54 percent saying they have confidence in the integrity of the organic label. Almost 60 percent of Millennial parents say thay have a "strong connection" with the label and feel the organic label is an important part of how they shop for food.

"The Millennial shopper puts a high premium on the healthiness and quality of the food they choose for their families," said Batcha. "This generation has grown up eating organic, and seeing that organic label. It's not surprising that they have a greater knowledge of what it means to be organic, and consequently a greater trust of the organic label."

Organic sales in the U.S. in 2015 posted new records, with total organic product sales hitting a new benchmark of $43.3 billion, up a robust 11 percent from the previous year's record level and far outstripping the overall food market's growth rate of 3 percent, according to OTA's 2016 Organic Industry Survey. Of the $43.3 billion in total organic sales, $39.7 billion were organic food sales, up 11 percent from the previous year, with non-food organic products accounting for $3.6 billion, up 13 percent. Nearly 5 percent of all the food sold in the U.S. in 2015 was organic.

About the Organic Trade Association

The Organic Trade Association (OTA) is the membership-based business association for organic agriculture and products in North America. OTA is the leading voice for the organic trade in the United States, representing over 8,500 organic businesses across 50 states. Its members include growers, shippers, processors, certifiers, farmers' associations, distributors, importers, exporters, consultants, retailers and others. OTA's Board of Directors is democratically elected by its members. OTA's mission is to promote and protect ORGANIC with a unifying voice that serves and engages its diverse members from farm to marketplace.