Britain’s fourth-largest food retailer was subject to a dramatic auction. 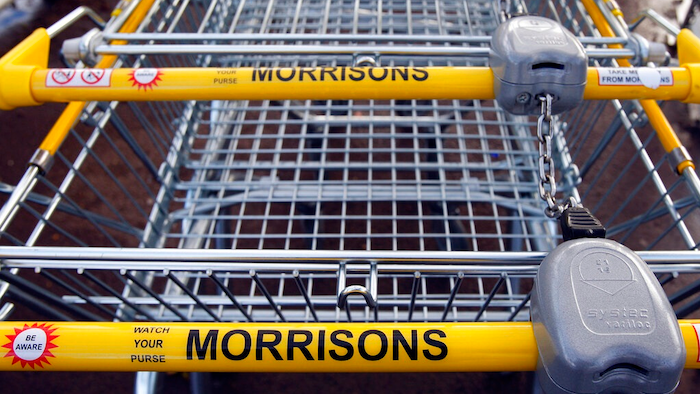 In this Thursday, Dec. 4, 2008 file photo, supermarket trolleys are seen outside a Morrisons supermarket in London. An American private equity group saw off a rival to narrowly win the battle to buy British supermarket chain Morrisons following a dramatic auction for the company. Britain's Takeover Panel said Saturday that New York-based Clayton, Dubilier & Rice (CD&R) offered 287 pence for each Morrisons share, just a penny more than the offer from Fortress, which is backed by Japanese bank Softbank.
AP Photo/Kirsty Wigglesworth, File

LONDON (AP) — An American private equity group saw off a rival to narrowly win the battle to buy British supermarket chain Morrisons following a dramatic auction Saturday for the company.

The winning offer values Morrisons at almost 7 billion pounds ($9.5 billion) and will be voted on by shareholders on Oct. 19.

Morrisons is Britain’s fourth-largest food retailer, employing about 110,000 people in nearly 500 stores and over 300 gas stations.

CD&R is one of the most firmly established investors in the sector and has been advised by Terry Leahy, the former boss of Tesco, Britain’s biggest supermarket chain, over the past 10 years.

It first made an approach for the supermarket in June, leading to speculation the sector was ripe for private equity takeovers. Fortress then made an offer of 6.3 billion pounds in July, revising it up to 6.7 billion a month later, which the Morrisons board accepted. Later in August, CD&R returned with an increased bid of 7 billion pounds, which led to the board withdrawing its support for the Fortress bid and throwing its weight behind the higher offer.

But because neither side made a formal bid, the Takeover Panel launched an auction process. Both sides agreed beforehand that all bids would be at a fixed cash price and could not include stakes in other businesses or dividends to shareholders.

Both sides were keen to stress they want to uphold the supermarket’s values and attempted to ward off suggestions they will start selling off vast swathes of the company’s property assets.

Private equity firms typically acquire undervalued companies and then look for ways to cut costs and boost profits before selling them at a profit. British assets are widely considered to be cheaper than they otherwise would have been as a result of Britain’s departure from the European Union and the coronavirus pandemic.

The Usdaw union, which represents many workers at Morrisons, is seeking discussions with the prospective owners over their plans.

“We have heard the assurances already given and welcome the constructive working relationship that Usdaw has experienced so far," said Joanne McGuinness, Usdaw national officer.

Morrisons was founded in 1899 as an egg and butter stall in a market in the north England city of Bradford. It steadily expanded and became a publicly listed business in 1967. It expanded further in 2004 with the acquisition of rival Safeway, a move that grew its presence in the south of England.

The firm is now largely owned by a raft of institutional shareholders, including Silchester International, Columbia, Blackrock and Schroders.