It's part of the brewing giant's previously-announced $1 billion investment to modernize its US facilities over the next two years. 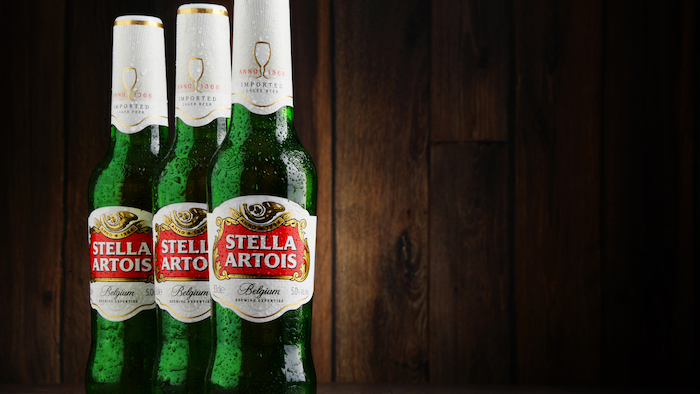 NEW YORK — Last week, Anheuser-Busch announced its planned investment of $1 billion over the next two years in its U.S. facilities to help drive the country’s economic recovery. As part of this investment, the company announced Feb. 9 that it will begin production of Stella Artois bottles in the United States to meet increasing demand and ensure continuity of supply in the summer season.

“Stella Artois is an industry-leading premium lager with unmatched quality, history and heritage. It is a critical element of our industry leading portfolio and we are excited to invest even further behind the growth of this beloved brand,” said Michel Doukeris, CEO of Anheuser-Busch. “As part of our $1 billion U.S. investment, we will combine our brewing expertise with over 600 years of Belgian heritage to ensure that beer drinkers continue to enjoy Stella’s uncompromising quality and refreshing premium lager taste.”

Anheuser-Busch will expand and upgrade capabilities across four breweries to produce Stella Artois in the United States. This significant investment will further fortify operations, create jobs in local communities and better serve our customers and consumers. In addition to the brewery upgrades, Anheuser-Busch will spend a supplemental $296 million for the domestic production and distribution of Stella Artois in the United States over the same two-year period.

“Throughout the pandemic, our advanced planning and proactive actions have put our U.S. supply chain in a strong position; however, we are subject to the instability of the international supply chain when it comes to some of our imports,” said Brendan Whitworth, U.S. Chief Sales Officer, North America, Anheuser-Busch. “This significant investment in our facilities that will enable us to produce Stella Artois in the U.S. will help create and sustain jobswhile reaffirming our commitment to ensuring our consumers can continue to enjoy the Stella they know and love.”

“I am proud to partner with Anheuser-Busch to bring Stella Artois production to the U.S. starting in St. Louis. This significant investment will strengthen our state and aid in the entire country’s economic recovery,” said Governor Mike Parson, Missouri. “For more than 165 years, Anheuser-Busch has played an important role in strengthening the American economy and making a positive impact across the country in the communities in which they call home, especially in our state of Missouri.”

The production of Stella Artois in the US will have the added benefit of making a positive impact on the environment as it will result in a reduction of 7,074 metric tons of CO2 annually aligned with the company’s 2025 Sustainability Goals.

“Anheuser-Busch’s new announcement to produce Stella Artois in the US is a great example of how a company can reduce its impact, not just in production, but in its distribution. Alongside their existing RE100 commitment to using 100% renewable electricity, their ongoing sustainability efforts demonstrate integrated climate leadership that will make a real impact on reducing freight emissions and reaching our collective goal of a net-zero economy,” said Amy Davidsen, Executive Director, North America, The Climate Group.

“As a Belgian myself, I’m proud that Stella is beloved around the world and recognized as an icon of refreshing, premium lager brewed with uncompromising quality. That remains true regardless of where it is brewed,” said Peter Van Overstraeten, Vice President, Premium and Super Premium USA, Anheuser-Busch.

“U.S. produced Stella will stay true to the time-honored Belgian recipe, utilizing the three signature ingredients – saaz hops, malted barley, and water,” said Isabelle Seunier, Head of Research & Development, North America, Anheuser-Busch. “As a Belgian Global Brewmaster, it’s my honor to ensure Stella consumers continue to enjoy the premium and unique taste of Stella brewed in the US. I worked closely with the Stella Artois Brewmasters in Belgium to brew Stella in the US, and our expert U.S. brewmasters will continue to do so.”

“Anheuser Busch’s U.S. brewing team already produces the highest quality and most beloved beers in the world,” said Andy McCain, President and COO, Hensley Beverage Company. “I am confident that this team in partnership with Belgian brewmasters will ensure the premium high quality of Stella Artois remains the same.”

Anheuser-Busch is known for its world class iconic beers that are brewed to the highest quality standards and maintain that consistency everywhere in the world. The premium high-quality of Stella Artois will always remain the same globally. The U.S. brewing team is already responsible for the successful development and brewing of several Stella products, including Stella Artois Solstice Lager, Stella Artois Midnight Lager, and Stella Artois Cidre.

The 11.2oz bottle will be the first shift in brewing production location. Cans and draught will transition to U.S. based brewing before the end of the year.

“I applaud the efforts of Anheuser-Busch to ensure the availability of Stella Artois during these challenging times by bringing production to the U.S. for the summer and beyond while maintaining the same time-honored brewing traditions that have made Stella a favorite among beer drinkers,” said David Stokes, President & CEO at Grey Eagle Distributors.

Anheuser-Busch Modernizing US Facilities With $1B Investment