Just when eateries of all categories and price levels had been anticipating a summertime comeback, new viral cases are upending everything. 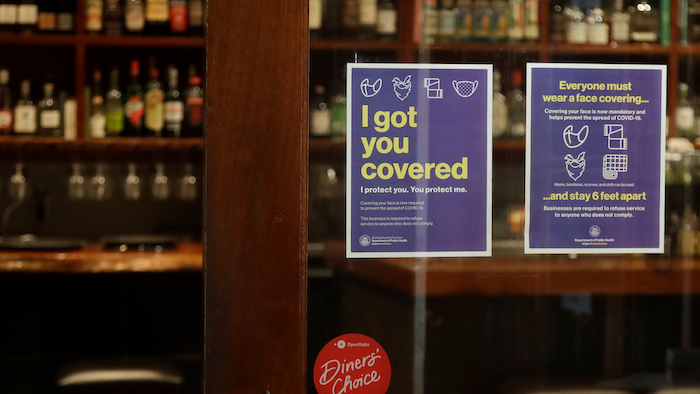 Signs advising social distancing and wearing face masks are posted on a door of The Barrel Room restaurant during the coronavirus outbreak in San Francisco on July 14. The Barrel Room, a San Francisco wine bar and restaurant, cautiously reopened last week, hoping to salvage as much of 2020 as possible from the coronavirus pandemic and the lockdowns meant to contain it.
AP Photo/Jeff Chiu

WASHINGTON (AP) — Restaurants helped revive the U.S. economy after the Great Recession of 2007-2009.

This time? Don't count on it. As the nation struggles to rebound from a now-resurgent coronavirus, restaurants seem much less likely to deliver an economic boost. They’ve suffered a heavy blow from lockdowns and occupancy restrictions, and it’s unclear how readily Americans will return en masse to dining out.

Consider the Barrel Room, a San Francisco wine bar and restaurant whose owner cautiously reopened this month, hoping to salvage as much of 2020 as possible. To stay afloat after a lockdown took effect in March, the restaurant tried selling groceries and delivering alcoholic drinks to customers. Owner Sarah Trubnick also fought through red tape to obtain federal aid — a process she likened to living in a Kafka novel.

As confirmed infections climb, Trubnick is bracing for the worst.

“We are prepared at any minute to close again,’’ she said. “It’s a very stressful situation.’’

Across the nation, millions of restaurant jobs have vanished in the face of lockdowns. Just when eateries of all categories and price levels had been anticipating a summertime comeback, new viral cases are upending everything.

The damage extends beyond darkened kitchens and dining rooms to the farms and wineries that supply them and the shopping centers that have grown to depend on restaurants as anchors to replace now-vanished stores that couldn’t compete with Amazon and Walmart.

Chris Shepherd, owner and executive chef of Underbelly Hospitality in Houston, said in an online essay that he might have to close his four restaurants because his company’s revenue is just 30% of what it was a year ago.

“I employ 200 people in this community," Shepherd wrote. "When I shut down, they lose their jobs. I’m no longer able to pay my farmers, cleaning companies, valet companies, linen companies, wineries, distilleries. Our reach is long.’’

Before the pandemic, restaurants had employed 11 million workers nationwide — more than the number who work in construction or in factories that produce high-priced manufactured goods. They generated more revenue than grocery stores. From 1990 through February this year, restaurant jobs grew more than twice as fast (91%) as overall jobs (40%).

“The restaurant industry’s role in the economy is outsized compared to its share of overall GDP,” said Mark Zandi, chief economist at Moody’s Analytics. “As it is often among the first jobs for many workers, it is critical to the training of the American workforce. It is also a vital source of jobs and incomes for lesser-skilled and educated workers.’’

The struggles in the restaurant industry also disproportionately hurt Black and Hispanic workers. Together, they account for more than 40% of restaurant jobs, versus 30% of overall U.S. jobs.

As restaurants and bars reluctantly closed their dining rooms, their sales sank from $66 billion in February to $30 billion by April — the lowest such total, adjusted since inflation, since 1983. In June, boosted by delivery and takeout customers, sales rebounded to $47 billion. But many restaurants desperately need to reopen their dining rooms.

“You cannot profitably run a takeover-delivery model if you also have 60 dark tables in the front of the house,” said Sean Kennedy of the National Restaurant Association.

Restaurants had cut nearly 5.4 million jobs in March and April before restoring 1.4 million of them as states began to reopen in May. But the bounce-back is in jeopardy. Confirmed cases have surged across the South and West, forcing states to slow or reverse plans to reopen. Zandi said he worries that restaurant jobs won’t return to pre-pandemic levels until the mid-2020s.

The data firm Womply reports that restaurant closures began rising in late June, especially in Texas, Arkansas and Arizona after having fallen steadily from late April into June.

“People are not out eating,’’ said Genell Pridgen, whose family runs a restaurant, butchery and three farms in North Carolina. “I’m not sure how long it will take for normal to get back.’’

Analysts say it's unclear when Americans will feel comfortable enough to pile into diner booths or raise toasts at bars or how long state and local governments will require them to operate at reduced occupancy.

“They won’t be able to squeeze tables in like they used to,’’ said Barbara Denham, senior economist at the commercial real estate research firm Moody’s Analytics REIS. “A lot of those restaurants … can’t make a profit on a table setup that is half of what is used to be.’’

The pain isn't confined to the restaurants themselves. Also hurting are local farms that supply high-end restaurants with top-quality produce and meat through the popular farm-to-table movement. Though some farms have increased their sales to grocery stores or directly to consumers, shifting away from specialty restaurants tends to carry a cost — lower prices.

The data firm Cortera found that the proportion of restaurants that had fallen behind on their payments to suppliers as of late June — 36% — was the highest for any industry, Zandi said.

“I would expect it to increase substantially in July," he said, "given the re-closings in states suffering from an intensification of coronavirus.”

The struggles of restaurants carry consequences for commercial real estate, too. Since the Great Recession, America’s shopping centers have rented space to restaurants, gyms and other so-called experiential tenants as an alternative to traditional shops, which have fallen vulnerable to competition from Amazon and other online mass sellers. Shopping center space occupied by restaurants surged 27% from the end of 2009 to early this year, compared with a 10% increase in overall retail space, according to the CoStar Group consultancy.

Sanford Sigal, CEO of NewMark Merrill, which owns 85 shopping centers in California, Colorado and Illinois, predicted that “well-run restaurants will come back stronger than ever.’’ Such restaurants have used the lockdown period to expand their takeout and delivery operations, he noted.

After closing in March, for example, the Iron City Sports Bar in Bellefontaine, Ohio, built a takeout system from scratch. Owner Matt Brown invested in equipment to make it easier to process carryout orders, reconfigured the saloon’s layout to promote social distancing and installed cameras to monitor the parking lot so his staff could see customers arrive.

“Our numbers are up from year to year,’’ said Brown, who employs 30 workers, about the same as before the pandemic. “That is due to the delivery and carryout.’’

Likewise, Sarah Trubnick’s Barrel Room got into the delivery business after receiving government approval to deliver wine, liquor and beer. She waited until July 6 to reopen the restaurant to outdoor dining. Twenty of her 30 employees are back. Others are staying home until the health crisis eases.

“The survival of the business is at stake,” Trubnick said. “All we can do is go day by day, make the best possible decisions and just cross our fingers.’’