Some 22 million tons of grain is sitting in silos waiting to be shipped out. 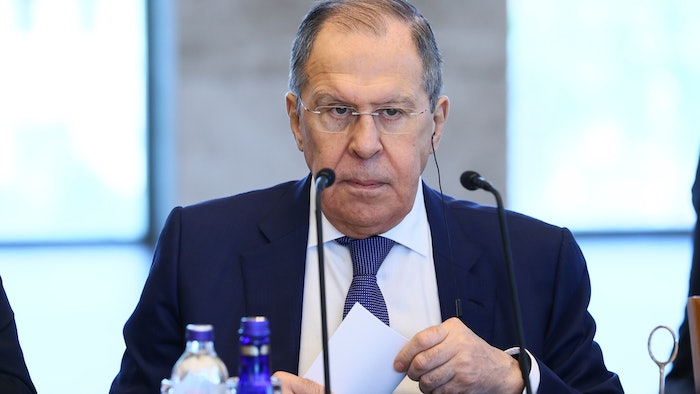 ANKARA, Turkey (AP) — Russia and Turkey on Wednesday voiced support for the creation of a safe maritime corridor in the Black Sea so Ukraine can export grain to global markets amid an escalating world food crisis. A Turkish minister said the move should also be accompanied by the easing of Western sanctions against Russia for its invasion of Ukraine.

Turkish Foreign Minister Mevlut Cavusoglu hosted his Russian counterpart Sergey Lavrov in Ankara for discussions focused on a U.N. proposal to free Ukraine's Black Sea ports and allow some 22 million tons of grain sitting in silos to be shipped out.

Ukraine is one of the world’s largest exporters of wheat, corn and sunflower oil, but the war and a Russian blockade of its ports have halted much of that flow, endangering food supplies to many developing countries. Many of those ports are now also heavily mined.

Ukraine's government was not represented at the Ankara meeting but has expressed concerns that removing mines from its ports to facilitate grain exports could allow Russia to attack its southern coast.

Lavrov promised that Russia would not “abuse” its naval advantage if Ukraine’s ports were demined and would “take all necessary steps to ensure that the ships can leave there freely.”

Both Russia and Turkey would also benefit from the export plan. The same corridor would also allow Russia to export food and fertilizer. Turkey would facilitate and protect the transport of the grain in the Black Sea, Turkish officials say.

“As Turkey, we find this plan reasonable and see it as a feasible one,” Cavusoglu told a joint news conference with Lavrov.

The scheme, however, would require negotiation between Moscow and Kyiv, he added.

The Turkish minister also backed easing Western sanctions against Russia for its invasion of Ukraine if it participates in the U.N. plan, saying that seemed “quite legitimate.”

“If the whole world is in need of the products to be exported by Ukraine and the Russian Federation, then a method needs to be established,” he said, adding that he hoped “technical preparations” could be made “as soon as possible.”

Ukrainian President Volodymyr Zelenskyy and Turkish President Recep Tayyip Erdogan discussed the creation of a safe sea corridor last week, the Ukrainian Foreign Ministry said Tuesday. It also called for security guarantees, such as a supply of weapons to defend against maritime threats and the participation of third-country naval forces.

Kremlin spokesman Dmitry Peskov said Tuesday the Russian military would need to check commercial ships taking the grain to make sure they don’t carry weapons. He added that after they are loaded with grain, Russia would help escort the ships to international waters.

“Our efforts are continuing concerning the technical planning on such issues as how it will be done, how the mines will be cleared, who will do it, how the corridor will be established and who will escort (ships),” Akar said.

Addressing the possibility of resumed peace talks between Kyiv and Moscow, Cavusoglu said Turkey was “much more optimistic."

Turkey hosted previous talks between Russian and Ukrainian officials in March but since then little progress has been made.

“We see an optimistic atmosphere in terms of going back to the negotiation table,” Cavusoglu said, citing recent comments by Zelenskyy. He reiterated Ankara’s offer to oversee a meeting between Zelenskyy and Russian President Vladimir Putin.

Lavrov said Russia was willing to hold further talks but accused Zelenskyy of “changing his position all the time” over conditions for a leaders’ summit.

Lavrov arrived in Turkey days after NATO members Bulgaria, North Macedonia and Montenegro reportedly refused to allow his plane to fly through their airspace to reach Serbia. Lavrov’s plane was able to fly directly to Turkey over the Black Sea.

Lavrov’s discussions in the Turkish capital also focused on Turkey’s plans to launch a new cross-border offensive in northern Syria against Syrian Kurdish militia that Ankara considers to be a security threat. Turkey needs Moscow’s approval to continue its presence in northern Syria, despite the two supporting opposite sides in Syria’s civil war. In 2020, 37 Turkish soldiers were killed in Russia-backed airstrikes against rebels in Syria’s last rebel-held Idlib province.

“Turkey really needs Russia’s blessing in order to be able to carry on this operation (in Syria.) And so I think they’re really going to try to get that kind of a concession out of the Russian side,” said Merve Tahiroglu, Turkey program coordinator at Project on Middle East Democracy.

Lavrov’s meeting came as Turkey — a NATO member — has voiced strong opposition to Sweden and Finland’s recent bids to join the alliance. Moscow has also objected to the Nordic countries’ candidacy — which analyst say may play a role in discussions concerning Syria.

Turkey has maintained its close ties to both Ukraine and Russia. It has criticized Russia’s invasion of Ukraine, but hasn't joined international sanctions against Russia.