Now at Import Limit, Japan Raises US Beef Tariffs to Near 40%

Imports of American beef will have tariffs of 38.5 percent through April 16. 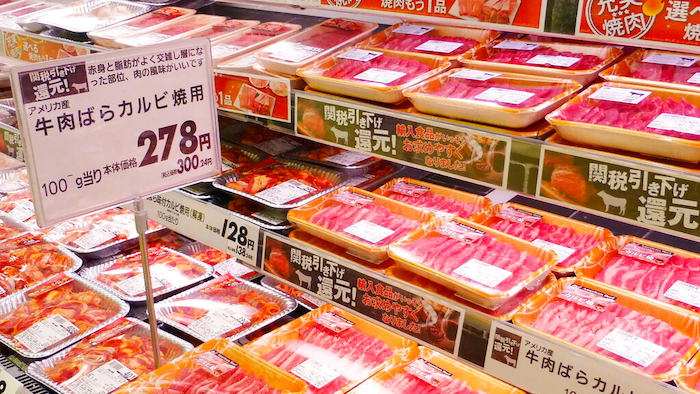 Packs of frozen beef beef imported from the U.S. are sold at a supermarket in Tokyo on Jan. 9, 2020.
Kyodo News via AP

TOKYO (AP) — Imported American beef in Japan has proved so popular it's topped the annual limits called “safeguards,” and the U.S. Meat Export Federation on Thursday urged Tokyo to raise the threshold.

Japan's import limit for American beef of 242,000 metric tons was reached in early March, and so tariffs will be raised from 25.8% to 38.5% for a month, starting Thursday through April 16, according to the Japanese Finance Ministry.

Japan’s limits on imports of meat and other farm products have been a recurring trade issue with the U.S., which heavily imports Toyota cars and Nintendo video games.

“Triggering of the beef safeguard is not unexpected,” USMEF, which promotes American beef, said in a statement.

“In fact, based on our 15-year outlook, USMEF projects that without an increase to the safeguard threshold, Japan’s imports of U.S. beef are likely to trigger the annual safeguard every year.”

The Japan-U.S. Trade Agreement also says that if the safeguard gets set off, Japan agrees to consult with the U.S. to adjust the level.

Japan’s imports of U.S. beef rose 3% in the first part of the year compared to the previous year. American beef exports to South Korea and China have also been growing.

In 2018, the United States exported $2.1 billion of beef and beef products to Japan. Japan is the U.S. largest export market for beef, based on value.

In an effort to make up for the decline in dining out because of the coronavirus pandemic, U.S. meat exporters have been carrying out a social media campaign in Japan with recipes and photos to encourage cooking beef at home.

Australia is the biggest rival for the U.S. in beef exports to Japan, but the cattle supply in Australia has suffered lately because of drought.

Japan banned American beef imports in December 2003 after the first case of mad cow disease in the U.S. The ban was eased in December 2005, but tightened again the following month, after prohibited spinal bones were found in a veal shipment. Beef imports resumed in 2007.