One of the state's biggest tree-fruit exporters normally ships up to 15 containers of fruit per week to Taiwan, and now suddenly has none. 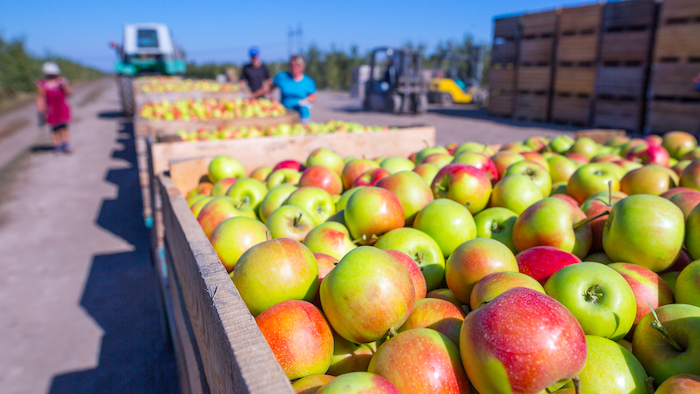 SEATTLE (AP) — Farm exporters in Washington state have been left with stockpiles of product and idle trucks as the pandemic has created a shortage of cargo containers.

Dave Martin, export sales manager for Stemilt Growers in Wenatchee, one of the state's biggest tree-fruit exporters, said the company would ship up to 15 containers of fruit a week to Taiwan before the pandemic. “This week, we will not have a ship,” he said.

The shortage has prompted foreign customers of Stemilt to look to competitors in countries such as Chile, where the apple harvest just started.

“Those sales are lost,” Martin said, commenting on the numerous shipments forgone since November.

The shortage of cargo space is the latest problem the pandemic has caused the global trade system. It has brought entire sectors to a virtual standstill, The Seattle Times reported Tuesday.

Americans' spending with online retailers, such as Amazon, since the pandemic began last March, has resulted in a surge of imports from Asia. The increase has overwhelmed some West Coast ports, where ships often sit for days to be unloaded, delaying cargo pickups and deliveries at other ports, including Seattle and Tacoma.

“We are now experiencing unprecedented eastbound cargo volumes coming out of Asia to the U.S., and it’s creating huge disruptions within the supply chain,” said John Wolfe, chief executive officer of the Northwest Seaport Alliance, which manages marine cargo operations in the ports of Seattle and Tacoma.

Shipping companies are able to make more money by quickly sending empty containers from the U.S. to Asia to accommodate the surge in imports, rather than refill them with American farm products. A container of Chinese electronics, apparel and other exports is worth more than one filled with American farm products, said Peter Friedmann with the Agriculture Transportation Coalition in Washington, D.C.

Data from the Northwest Seaport Alliance show 37% of containers exported from Seattle and Tacoma in January 2020 were empty compared to this year when more than half were shipped empty. Wolfe explained that many businesses are in a rush to get their vessels and container equipment back to Asia to capitalize on the high-value shipments from Asia to the U.S.

Trade economists and policymakers expect the capacity shortages to decline as consumers return to normal purchasing patterns. But many exporters are concerned they permanently lost some market share.

“My biggest worry is that suddenly what seemed like a blip in exports and a temporary problem becomes, well, now China is going elsewhere for their apples and their cherries and their hay,” Democratic state Rep. Kim Schrier said.

Schrier said she wants the government to pressure shipping companies to make more room for American exports on westbound ships by minimizing the number of empty containers on their way back to Asia.

The Federal Maritime Commission is already exploring whether shipping companies’ practices violate U.S. shipping law, Schrier said. Two of the ports’ biggest carriers — MSC and Maersk — did not respond to requests for comment.