Industry Groups, Officials Back US Blueberry Growers Against Rising Imports

The National Farmers Union noted that American growers' operating returns fell 32 percent between 2015 and 2019 because of rising imports. 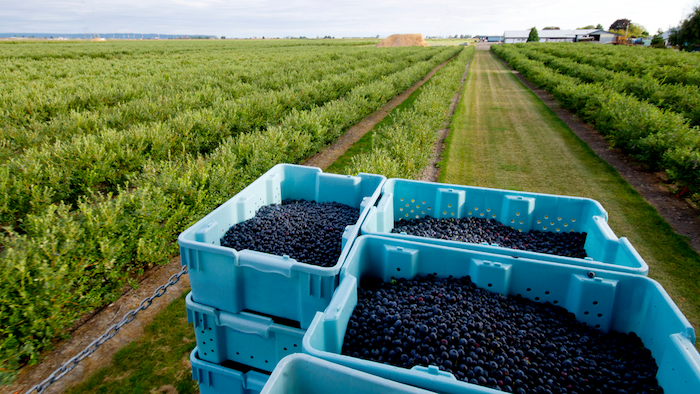 WASHINGTON — A broad coalition of industry groups, elected officials, and state agricultural leaders – including U.S. Sens. Debbie Stabenow and Gary Peters of Michigan – are standing up to defend the interests of American blueberry growers by submitting letters of support for the International Trade Commission (ITC)'s investigation into the serious injury caused by surging imports of foreign blueberries, the American Blueberry Growers Alliance (ABGA) announced Monday.

"Conducting this investigation is important to assess the full scope of the impact of these imports on domestic producers," according to a Feb. 3 letter co-signed by Sen. Debbie Stabenow (D-Mich.), Chairwoman of the U.S. Senate Agriculture Committee, and Sen. Gary Peters (D-Mich.). "It is vital to maintain a domestic blueberry industry in the United States so that American families are not dependent on foreign imports for our food supply."

In a letter submitted to the ITC on Feb. 5, the National Farmers Union (NFU) noted that growers' operating returns fell 32.4 percent between 2015 and 2019 because of rising imports. "The significant surge of low-priced blueberry imports in the last several years, coupled with the timing of these imports during U.S. harvesting periods, has had a devastating effect on U.S. blueberry growers, processors, and the rural communities where they live and work," said Rob Larew, president of NFU, which represents approximately 200,000 family farmers and ranchers across the United States. "The concerns of farmers whose markets are negative impacted by imports – and the data that supports those claims – must be taken seriously."

The Florida Farm Bureau Federation, Georgia Farm Bureau and Georgia Fruit & Vegetable Growers Association also sent letters to the ITC last week, highlighting the far-reaching consequences of the swell in blueberry imports into the United States, including for American consumers. "Not only do these imports threaten domestic businesses and livelihoods, they also expose U.S. consumers to products from countries with poor or inconsistent product safety records," said John Hoblick, president of the 136,000-member Florida Farm Bureau Federation.

Further, in a recent letter signed by 21 industry groups, Bill Bullard, CEO of R-CALF USA, urged the Commission to recognize the serious injury affecting domestic blueberry growers, adding: "Blueberry growers deserve a chance to sell their goods in the United States at reasonable prices and deserve the breathing space of effective safeguard relief to make the necessary adjustments to sustain a secure domestic supply of blueberries."

"Year after year, our farmers prove resilient in the face of great challenges," Fried said. "While we can't stop pandemics or natural disasters, this is one challenge the ITC can take on. America's growers are the best in the world, and the ITC can help them succeed by providing a level playing field for our producers to compete."

In December, the Alliance also received support from a bipartisan coalition of 32 members of Congress in a letter urging the ITC to make an affirmative determination in the case, in addition to a letter signed by eight members of the Michigan delegation in the House of Representatives.

These letters and remarks come ahead of the ITC's vote to determine whether the domestic blueberry industry has been seriously injured, or is threatened with serious injury, by the influx of imports from countries like Mexico, Peru, Chile, Argentina and Canada, which is scheduled to take place on February 11. Blueberry imports have surged by 62 percent since 2015, as these countries have ramped up production to sell into the American market, increasingly during the U.S. harvesting windows.

American Blueberry Growers Alliance is a national association representing blueberry growers and farmers in the United States. ABGA provides a unified voice for blueberry growers in states across the country, including California, Florida, Georgia and Michigan, advocating on behalf of their interests and for the long-term viability of the domestic blueberry industry.