It's typically one of the busiest times of the year for US lobster shippers, but the threat of COVID-19 has ground business to a halt for many due. 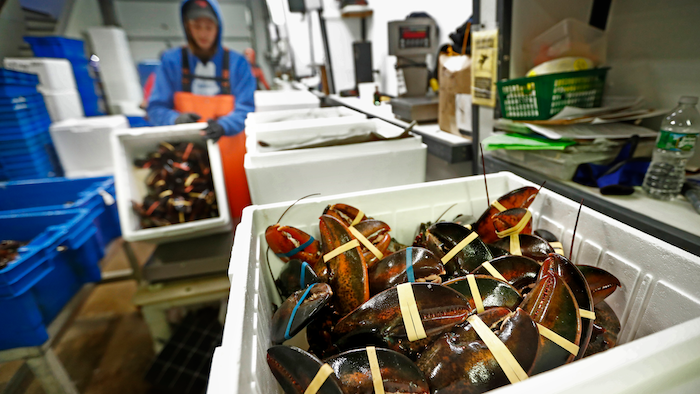 In this Sept. 11, 2018 file photo, lobsters are packed at a shipping facility in Arundel, ME.
AP Photo/Robert F. Bukaty

PORTLAND, Maine (AP) — America's lobster exporters recovered from the Trump-era trade war with China to have a good 2020. But the industry is approaching one of the most critical times of the year with trepidation because of the coronavirus.

Chinese New Year is typically one of the busiest parts of the calendar for America's lobster shippers, who send millions of dollars worth of the crustaceans to China every year. This year the holiday is Feb. 12, and industry members said the Year of the Ox won't necessarily be the Year of the Lobster.

That's because shipping is complicated this winter by the threat of the virus. Mike Marceau, vice president of The Lobster Company in Arundel, Maine, said he isn't expecting many exports.

Business would normally be booming right now, and it has ground to a halt, Marceau said. It's disappointing because the last spring and summer were fairly strong, he said.

“It started in spring, and it held right up until a couple weeks ago,” Marceau said. “We sold a lot of product. We've just lost getting a Chinese New Year because of COVID.”

Lobster exports to China have been strained in the U.S. for a couple of years because of instability brought to the business by former President Donald Trump's trade hostilities with the country, which is a huge buyer of seafood. America sent more than $140 million in lobsters to China in 2017 and 2018, but exports fell to about $51 million in 2019 because of heavy tariffs imposed during the trade war.

Trump then brokered a new deal with China in 2020 that included renewed lobster exports. The country bought about $95 million in lobsters from America in 2020 through November, federal data shows.

“There are all these logistics things that are throwing sand in the gears of the seafood trade,” Sackton said. “The financial risk for the importer has gone up.”

China's interest in American lobsters has grown exponentially in the last decade as the country's middle class has grown. Lobster is especially popular around Chinese New Year in China because a cooked lobster is red, a color that represents prosperity.

Chinese New Year is typically a time of heavy travel in China, but that could also be different this year. China is expected to buy fewer lobsters for this year's holiday in part because of government travel restrictions designed to prevent spread of the coronavirus, said Stephanie Nadeau, owner of The Lobster Company. Less travel means fewer celebrations and fewer festive, expensive meals.

China buys the same species of lobster from the U.S. and Canada, which has a large lobster industry in its Maritime provinces. That means competing with Canada for a potentially reduced market this year. Some lobsters that are caught by U.S. lobster fishermen, who are based mostly in New England, are also eventually shipped to Canada for processing and exportation.

American shippers are prepared for a year in which it's going to be difficult to send lobsters to China, said Mike Tourkistas, chief executive officer of Truefoods, a Topsfield, Massachusetts, exporter.

“I think in the U.S. we are going to do less than a year ago, and I think that is mostly due to lack of air cargo,” Tourkistas said. “A lot of flights are not available to us anymore.”