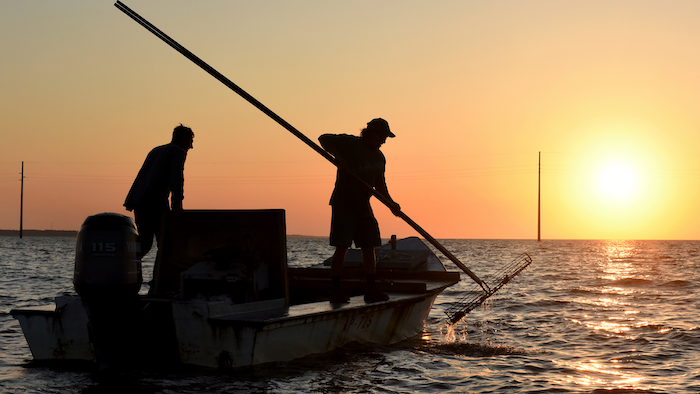 In this May 25, 2016 photo, the work day begins early for oyster harvesters in the Florida panhandle's Apalachicola Bay.
Taimy Alvarez/South Florida Sun-Sentinel via AP, File

TALLAHASSEE, Fla. (AP) — Because of a dwindling oyster population, a Florida agency voted unanimously Wednesday to shut down oyster harvesting in Apalachicola Bay through the end of 2025, dealing a blow to an area that historically produced 90% of the state’s oysters and 10% of the nation’s.

People in the area are divided between coming up with a long-term plan to save the industry, and allowing it to continue on a limited basis. The Florida Fish and Wildlife Conservation commission did express the hope of reopening the bay before the ban on commercial and recreational harvesting ends if oysters recover sooner.

“If we can get there faster, that's everyone's desire,” Commissioner Michael Sole said. “Look, time is money for these people. I understand why we're saying a five-year time horizon, I just think that should be the outside edge of our closure and we should be driven to doing what we can to make this as fast as possible.”

The state is using a $20 million grant to help restore the bay, which used to support more than 100 families with its abundance of oysters.

“It breaks my heart, man. I’ve watched boats out there my whole life,” said Brandon Martina, who works at Lynn's Quality Oysters, a bay-front business his family has run since 1971. The business started out as a wholesale oyster-shucking house, but as supplies dwindled, they converted it into a retail seafood shop and restaurant.

But instead of serving Apalachicola oysters, they're buying them from Texas.

“We went from running tractor-trailer loads to getting maybe eight to 10 bags a day, so we just started doing a hatch shell bar,” he said.

The commission issued an emergency order in July shutting down oyster harvesting on Aug. 1 until it could consider the five-year shutdown. The industry has struggled for years, in large part because of a drain on freshwater flowing into the bay. Atlanta uses the water upstream as a water supply, and as it has drawn more water, it’s affected the salinity level in the bay that helps oysters thrive.

David Barber owns a wholesale and retail oyster and seafood business in nearby Eastpoint. He's one of less than a handful of wholesalers in a region that used to have dozens, but now he's selling Texas oysters.

Still, he thinks a five-year closure is going too far, saying the right conditions could help oyster populations spring back quickly.

“They should listen to the people who work the bay, especially some older guys," Barber said. “I don't think nobody in the county is against them closing it for a little while to let them repopulate. ... If it takes five years, that's another thing, but they can do it year by year.”

The sweet, salty, plump mollusks are prized well beyond the region, and tourists have flocked to tiny, lost-in-time Apalachicola — population 2,354 and known to locals as Apalach — to enjoy water views at restaurants that served raw, shucked oysters pulled out of the bay that morning.

The once-booming oyster industry is part of the lifeblood of Apalachicola, a town that has had to reinvent itself over the past two centuries. In the 1830s as the cotton industry grew, the town became the third-largest port on the Gulf of Mexico, trailing only New Orleans and Mobile, Alabama.

Cotton made Apalachicola wealthy, but after the Civil War it turned to a new source of wealth: lumber. When lumber faded, it reinvented itself again and prospered on shrimping and oyster harvesting.

As the seafood industry took a hit, Apalachicola turned to tourism and is now known for it’s 19th- and early 20th-century buildings, quaint independent shops, restaurants, bars and easy-going pace.

Still, the oyster industry provides jobs, leaving many to have to look elsewhere for work. For decades, Apalachicola by far led the state in oyster production, but the decline began about three decades ago and the industry nearly collapsed in 2012.

Shannon Hartsfield used to work the waters, but gave it up eight years ago because of shrinking oyster supplies. He now works with university researchers studying the bay and efforts to help it recover.

“It doesn't need to reopen until it can sustain 100, 150 families instead of just three or four,” Hartsfield said, recalling the days when the industry was booming. “Shoot, all the way down the beach there were oyster houses, and right now there's only one. David Barber is the only one that's even got a shucking house in Eastpoint, and there's only two in Apalach. That's crazy. Between Apalach and Eastpoint there were probably over 60 processing plants."

Shipping Is Tough on the Climate, Hard to Clean Up

The pact is expected to boost exports of traditional British products such as Scotch whisky, while boosting imports of lamb and wine from Australia.
Jun 15th, 2021

US Wholesale Prices Up Record 6.6% Over Past Year

The 109-year-old organization says the coronavirus — not thinner demand for Thin Mints — is the main culprit.
Jun 14th, 2021

The 100-year-old P&S law was originally designed to protect poultry and hog farmers and cattle ranchers from unfair, deceptive and anti-competitive practices in the meat markets.
Jun 14th, 2021

The industries experiencing the most activity include PPE, medical, tech and defense.
Jun 10th, 2021

It becomes the ninth state added to the cooperative.
Jun 10th, 2021

Officials said their goal is to increase domestic manufacturing, limit shortages of vital goods and reduce dependence on geopolitical competitors.
Jun 8th, 2021
Follow Us
Most Recent