McDonald's Q1 Sales Fall as 25% of Stores are Closed

The company said earlier investments in digital ordering and delivery have helped it weather declines in in-store traffic. 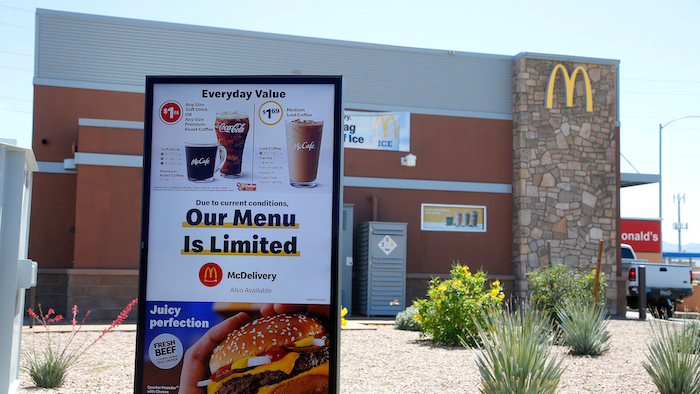 In this April 20, 2020 file photo, a new sign lets drive-thru customers know that the available menu at a local McDonalds is no longer complete due to the ongoing coronavirus restrictions in Phoenix.
AP Photo/Ross D. Franklin, File

Most McDonald’s restaurants in the U.S. and China are now open for drive-thru and delivery, but global lockdown orders still took a bite out of the company’s first quarter sales.

McDonald’s said Thursday its sales fell 6% to $4.71 billion in the January-March period. Declines have persisted in April.

Approximately 75% of the fast food giant's 39,000 stores globally are open. In China, where 25% of stores were closed in February, nearly all have reopened; 99% of U.S. stores are open as well, offering limited menus and takeout food. But stores remain closed in some key markets like France, the United Kingdom and Italy.

McDonald’s started the year strong. Through February, its same-store sales — or sales at stores open at least a year — were up 7.2% worldwide and 8.1% in the U.S. But sales tumbled in March as global lockdowns took hold. McDonald’s ended the quarter with same-store sales down 3.4%.

McDonald’s said earlier investments in digital ordering and delivery have helped it weather declines in in-store traffic. Around 25,000 McDonald’s worldwide now offer delivery, while 20,000 let customers order and pay on their mobile phones.

In the U.S., drive-thru already made up two-thirds of McDonald's sales before the pandemic.

Chicago-based McDonald’s said its first-quarter earnings fell 17% to $1.11 billion, or $1.47 per share. That fell short of the $1.57 per share that Wall Street forecast, according to analysts polled by FactSet.

The company shored up its finances in March by raising $6.5 billion in debt markets. It also plans to conserve cash by reducing the number of new restaurant openings this year. McDonald’s has withdrawn its 2020 financial guidance and its long-term outlook.