Despite 180 worker infections, Tyson had kept the plant open. 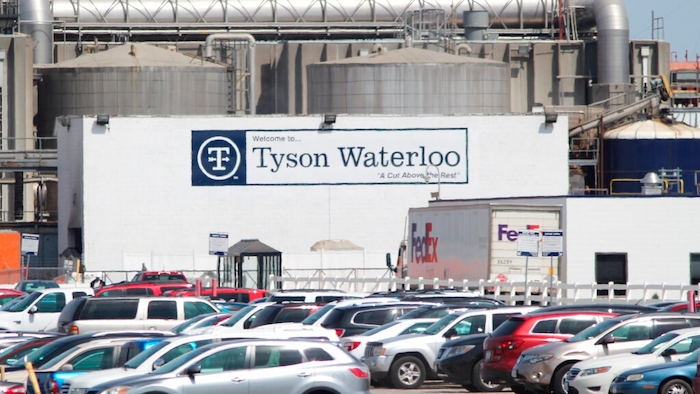 A Tyson Fresh Meats plant stands in Waterloo, Iowa, date not known. On Friday, April 17, 2020, more than a dozen Iowa elected officials asked Tyson to close the pork processing plant because of the spread of the coronavirus among its workforce of nearly 3,000 people.
Jeff Reinitz/The Courier via AP

IOWA CITY, Iowa (AP) — Tyson Foods suspended operations Wednesday at an Iowa plant that is critical to the nation's pork supply but was blamed for fueling a massive coronavirus outbreak in the region.

The Arkansas-based company said the closure of the plant in Waterloo would deny a vital market to hog farmers and further disrupt U.S. meat supply. Tyson had kept the facility, its largest pork plant, open in recent days over the objections of alarmed local officials.

The plant can process 19,500 hogs per day, accounting for 3.9% of U.S. pork processing capacity, according to the National Pork Board.

More than 180 infections have been linked to the plant and officials expect that number to dramatically rise. Testing of its 2,800 workers is expected to begin Friday. Cases and hospitalizations in Black Hawk County have skyrocketed in recent days and local officials say the plant is the source of most infections.

In addition to those who have tested positive for the virus, hundreds of workers were staying home out of fear, and the plant had been running at reduced production levels.

Employers have struggled to contain the virus in meatpacking plants, where workers toil side by side on production lines and often share crowded locker rooms, cafeterias and rides to work. While plants have added safety measures, public health experts say social distancing is virtually impossible.

Several facilities have temporarily closed due to virus outbreaks, including a Smithfield Foods plant in Sioux Falls, South Dakota, a JBS USA plant in Worthington, Minnesota, and a Redwood Farms Meat Processors in Estherville, Iowa. Others have stayed open or resumed production after pauses for testing and cleaning.

On Wednesday, Tyson announced it would close a pork plant in Logansport, Indiana, and that its 2,200 workers would undergo testing after some became infected with the virus. The plant takes hogs from farmers across nine states.

In Texas, state health investigators said Wednesday they have identified 114 cases of COVID-19 “associated” with a JBS Beef plant and are working to determine whether there’s an ongoing source of infection. Department of State Health Services spokeswoman Lara Anton said the company contacted the agency last week to ensure they were doing everything they should to protect staff at the facility in Cactus, in the Texas Panhandle. The plant has not closed.

JBS Beef spokesman Cameron Bruett said in an email “there is no investigation to our knowledge” but that the company would shut down its Cactus location if it was deemed unsafe.

The company contacted the health department last week to ensure they were doing everything they should be to protect its staff, Anton said. Health officials visited the plant Wednesday and confirmed JBS implemented the department’s recommendations and is “following all of the best practices for an essential business to remain in operation,” Anton said.

An estimated 25% of U.S. pork processing capacity has been closed or idled due to reduced operating speed over the past two days, said Steve Meyer, an economist with Kerns and Associates in Ames, Iowa.

As a result, prices are starting to increase and analysts warn that customers could soon see shortages of certain products at grocery stores. At the same time, hog prices are plummeting due to excess supply, devastating farmers.

A Tyson Fresh Meats plant stands in Waterloo, Iowa, date not known.Jeff Reinitz/The Courier via A

In Kansas, a critical beef production state, an official said Wednesday that 168 meatpacking workers had tested positive to date. In Missouri, two rural counties that are home to several meatpacking plants reported huge spikes in infections.

Tyson Fresh Meats President Steve Stouffer said its Waterloo closure was driven by “the combination of worker absenteeism, COVID-19 cases and community concerns.” He warned of “significant ramifications" for farmers, distributors and grocers in the supply chain.

Tyson said workers would be compensated during the shutdown and that the timing of reopening would depend on several factors, including testing.

Local officials, including Waterloo Mayor Quentin Hart and the Black Hawk County Board of Health, had called on Tyson or Republican Gov. Kim Reynolds to temporarily close the plant. They had warned that its continued operation would exacerbate the spread of the virus in the area and that the company was endangering its workers.

A 65-year-old employee in the plant's laundry department died Sunday after contracting the virus, the Waterloo-Cedar Falls Courier reported.

The governor blocked local authorities from closing the plant in an April 16 order that banned social gatherings in northeastern Iowa. It granted the exclusive power to the Iowa Department of Public Health to shut down businesses over coronavirus concerns.

The governor and the department had been working with Tyson to keep the plant open.

Reynolds argued that the economic disruption caused by plant closures outweighed the health risks, warning that farmers might have to euthanize their pigs. She said that “people are gonna get" the virus in large workplaces but most will experience mild or no symptoms.

While it's true that for most people, the virus causes mild or moderate symptoms that clear up in a few weeks, it can lead to more severe illness and even death for some, especially older adults and those with existing health problems.

Lawmakers said an earlier closure would have better protected public health and been less harmful economically. “My concern is the impact this has had because we didn’t act soon enough," said Democratic Rep. Ras Smith of Waterloo.

The governor didn't respond directly when asked Wednesday if the state should have intervened. She defended her overall response to the crisis but said, “There’s always more we could have done.”

Tyson resumed operations Tuesday at its pork plant in Columbus Junction, Iowa, which had been shut down for two weeks after an outbreak infected hundreds and killed two workers.