Pre-registration for PACK EXPO was up significantly (nearly 10 percent) going into the event, however, the East Coast storm did have some effect on the final attendance numbers. Still, in spite of the storm, PACK EXPO welcomed 45,300 attendees to McCormick Place for the four-day event, which is an increase of 3 percent over the 2010 show. Much of this increase can be credited to the significant growth in the number of international attendees, which was up just over 53 percent from 2010.

Charles D. Yuska, president & CEO of PACK EXPO owner and producer PMMI, says, “While we fully expected to surpass our attendance goals, the storm’s effect on East Coast travel prohibited many from making the show. However, we still finished with the largest PACK EXPO International since 2006.”

Yuska adds, “The increase in exhibitors speaks to the quality of business done at PACK EXPO. These exhibiting companies invest time and resources, and they have to believe that they are going to get a return on that investment.”

The momentum from the Chicago show continues with exhibitors already planning their presence at PACK EXPO Las Vegas, Sept. 23-25, 2013. Approximately 47,000 square feet of booth space sold during the show in Chicago last week, bringing the current PACK EXPO Las Vegas net square footage to nearly 560,000 nsf, over 20 percent ahead of pace from 2011. This is an excellent indicator that next year’s PACK EXPO Las Vegas 2013 will be the largest yet and that business remains on the upswing.

“PACK EXPO International 2012 was definitely a success,” says Yuska, “Traffic was strong, despite the storm, and the exhibitors I spoke with were very pleased with the number and quality of leads they received. I think it’s also significant that exhibitors were already planning ahead and reserving booth space for PACK EXPO Las Vegas 2013.”

About PMMI
PMMI is a trade association of more than 600 member companies that manufacture packaging, processing and related converting machinery in the United States, Canada or Mexico; machinery components and packaging containers and materials. PMMI’s vision is to be the leading global resource for the packaging and processing supply chain, and its mission is to improve and promote members' abilities to meet the needs of their customers.

Learn more about PMMI and the PACK EXPO trade shows at PMMI.org and Packexpo.com.

The benefits of modern ERP software are many for food & beverage manufacturers, but the software selection process can seem daunting. In our new whitepaper, we discuss the key ERP criteria you should consider and how to choose a solution.
Aug 5th, 2021 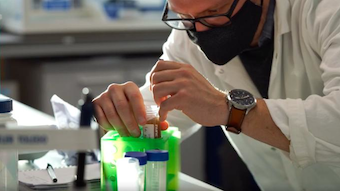 The plastic-like free-standing film can be made at industrial scale.
Jun 10th, 2021

A portion of the proceeds of each 'Open for Good' aluminum bottle sold will go toward helping the industry.
Apr 27th, 2021

The elephant in the dining room is that single use condiments cause a crushing amount of waste.
Apr 26th, 2021

A revolutionary eco-friendly plastic is almost ready to hit the shelves.
Apr 22nd, 2021

They were inadvertently manufactured in the packaging for Hostess Chocolate CupCakes.
Apr 13th, 2021