The amount of canola being grown in the U.S. has increased dramatically in the last two decades or so, with 1.7 million acres planted in 2012. Many see canola as a replacement for artery-clogging trans fats found in a variety of junk foods. 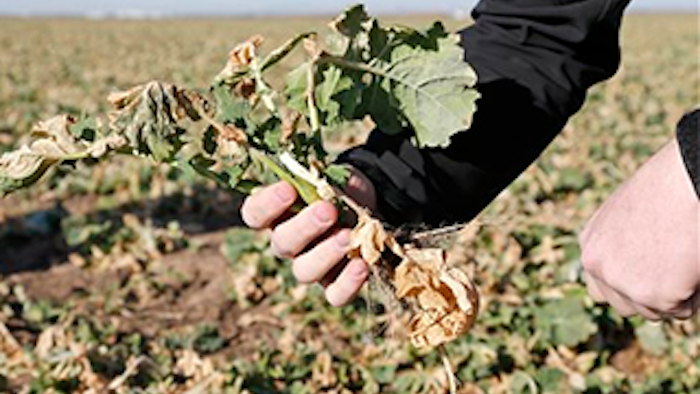 TULSA, Okla. (AP) — From Oregon to Oklahoma, farmers have started planting canola in earnest, rotating the yellow-flowered crop that could blossom into a replacement for artery-clogging trans fats found in myriad junk foods, such as cookies, cakes and pies.

The amount of canola being grown in the U.S. has increased dramatically in the last two decades or so, with 1.7 million acres planted in 2012. Some of it is growing in areas such as Oklahoma, which for generations has been dominated by wheat and cattle operations.

As Oklahoma grower Jeff Scott joked, before canola gained popularity, a farmer's idea of crop rotation here was taking an 800-pound steer off a pasture and replacing it with a 500-pounder.

Canola seeds produce oil with less saturated fat than many cooking oils and got a boost last fall when the Food and Drug Administration announced it was changing its view on trans fats. The FDA issued a preliminary decision that trans fat, also called partially hydrogenated oils, would no longer be listed as "generally recognized as safe" and began taking comment from the food industry on a timeline for eliminating their use.

Increased use of canola has led to strong prices that can top other crops. For example, canola now brings farmers about $10 a bushel, compared to about $6 to $7 for wheat.

A well-run canola operation could harvest up to 40 bushels an acre.

"I've been on the ground floor of working with winter canola, and whenever you try something new, you're going to have a lot of challenges, but I tell you what, in the last few years, the winter canola ... (has been) a game changer for farmers — I'm seeing it out in the field," said Heath Sanders, a canola field specialist near Lawton, Okla., who's been rotating winter canola with his other crops for the past seven years on the family farm.

Trans fats lend foods texture and extend their shelf life, but at major cost to the public's health. They lower "good" HDL cholesterol, elevate "bad" LDL cholesterol and can harden arteries. FDA Commissioner Margaret Hamburg has said doing away with them could prevent 20,000 heart attacks and 7,000 deaths a year in the United States.

Large restaurants and foodmakers are already phasing out the use of partially hydrogenated oils and have turned to canola and other oils as a replacement. The producers of Oreo cookies, for example, transitioned in 2006 from partially-hydrogenated oil and today use canola oil, among other ingredients, as a substitute.

The result of the switch in some of Americans' most beloved snacks?

"As far as I've heard, not a single consumer has noticed or complained," said Michael Jacobson, executive director of Washington-based Center for Science in the Public Interest. "Food companies work very hard to make the improvement invisible."

Farmers and industry experts said the amount of canola grown in Oklahoma soared in the past few years.

"We've brought a totally new cropping system to the region," said Scott, the founder and president of the Great Plains Canola Association, who grows about 1,500 acres of canola at his farm in Pond Creek, Okla. "It's kind of neat to sit back and watch an industry being created in the Southern Plains."

Farmer Ryan Pederson, president of the trade group U.S. Canola Association, said many farmers have been accustomed to growing only one or two crops, such as wheat or corn, but are becoming more comfortable with growing an alternative plant. He said they're seeing the payoffs in the form of a larger pocketbook.

"The great thing about canola is that's it's something that's good for the American public and for the farmers, it's been good for the bottom line," said Pederson, who plants about 40 percent of his land northwest of Devils Lake, N.D., in canola.

The sky may not always be the limit for canola, which compared to more traditional U.S. crops is still taking baby steps.

Jacobson estimates the canola industry has already reaped roughly 75 percent of the benefits it could ultimately acquire due to the decline in the use of partially hydrogenated oils (PHO). If the FDA ultimately bans trans fat as expected, Jacobson said the canola business will climb a bit more, but even then he thinks demand could plateau due to competition from a resurging soybean oil industry.

"Many of the products still made with PHO need a solid fat —more like palm oil or (restructured) soybean oil than canola — so canola's gain might not be as proportionately great in the future as it was in the past," Jacobson said.

For now, growers are counting their blessings — and the dollars — they're making off the crop.

"I'm excited for the farmers," said Sanders, the canola expert. "This crop is changing how we farm. It's changing agriculture, and we're going to continue to see that."