All cuts are made of Meati mycelium, a superfood protein similar to the root structure of mushrooms. 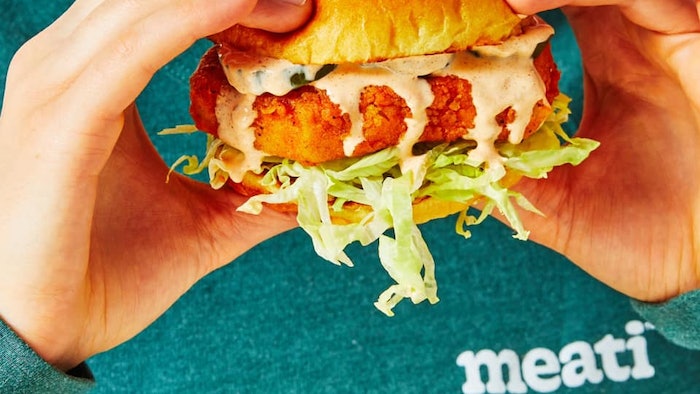 Meati’s official market debut marks the largest step to date in the company’s mission to deliver scalable, high-quality and minimally processed nutrition while using a fraction of the ingredients, water and land used in other animal-free meats. Meati’s national debut comes on the heels of the startup's successful pre-order launch in February, which saw the sale of 1,116 Meati cutlets in the first hour and the entire pre-order inventory selling out in less than 24 hours.

“We know Meati has the potential to diversify the protein category with whole-food alternatives that deliver high-quality nutrition which have widespread support as evidenced by the early enthusiasm from our pre-order offering,” said Tyler Huggins, CEO and co-founder of Meati. “Today’s national debut has been years in the making, and we’re eager for people at home to try Meati and feel the difference our whole-cut, whole-food nutrition delivers.”

Today’s direct-to-consumer availability builds on Meati’s appearance on menus at Colorado-based restaurants SALT Bistro and Birdcall, as the company works towards its goal of being the U.S. market share leader in animal-free meat by 2025. To rapidly scale and drive accessibility to its nutritious products, Meati will be expanding reach through national and local retail and food service partnerships this year.

“It’s such an exciting time of growth here at Meati as we officially enter the market and build breakthrough launch plans with key commercial partners across channels,” said Scott Tassani, President of Meati. “We’re looking forward to what’s to come in near-term collaborations, as we pilot our offerings and set our sights on new market expansion later this year.”

In tandem with today’s national direct-to-consumer debut, Meati has tapped David Chang, Chef and Founder of Momofuku and Majordomo Media, to serve as a Meati Ambassador to partner with the brand on a multitude of projects from consumer education to product collaborations. The partnership will commence with education through digestible short-form content across Meati’s owned channels.“I’ve been closely following plant-based innovations for years and can say without hesitation that the food Meati delivers is unmatched in terms of ingredients, texture and taste,” said Chang. “I’m thrilled to be part of the team and mission and want to bring the power of Meati to life as people prepare it in their home kitchens.”

Meati’s instructional content featuring Chef David Chang includes bite-sized cooking tutorials and recipes for each cut, and is rolling out across Meati’s social channels and Meati.com. Beginning today, consumers can officially place orders of Meati’s Classic Cutlet and Crispy Cutlet on Meati.com, with Meati’s Steak available later this spring. For more information, people can connect with Meati on Instagram, Twitter, Facebook or at Meati.com.

Meati is the healthiest way to feed people around the world. We believe everyone deserves delicious, nutrient-rich, food that delivers complete protein while helping to protect and preserve our planet’s water, land and air. Harnessed from mycelium, a superfood protein similar to the root structure of mushrooms, Meati modernizes ancient, natural processes to grow clean, sustainable nutrition that tastes great and does good. Meati delivers nourishment that systemically honors health, happiness, and the environment. Available at www.meati.com and coming soon to retail and restaurants.