While revenue rose double-digits, the company took a net loss. 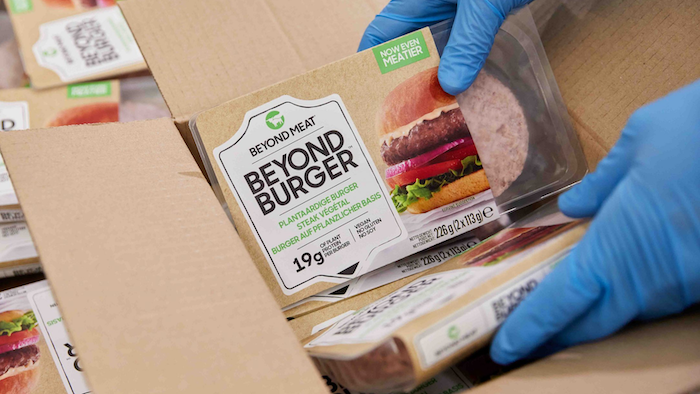 The company based in El Segundo, California, reported that its revenue rose 11.4% to $108.2 million in the January-March period. That fell short of Wall Street's forecast of $112.6 million, according to analysts polled by FactSet.

Beyond Meat reported a net loss of $27.3 million, compared to a profit of $1.8 million in the same period a year ago. Adjusted for one-time items, the company lost 42 cents per share. Analysts had expected a loss of 18 cents a share.

Beyond Meat said its U.S. retail sales rose 28% in the quarter. The company added hot Italian sausage and value burger packs at several hundred Walmart stores in March. Its international retail sales more than doubled as it added 2,400 outlets in Europe.

But food-service sales were down 26% in the U.S. and 44% internationally, reflecting lower demand from restaurants and other venues during the pandemic.

That is slowly turning around, Beyond Meat President and CEO Ethan Brown said. Food-service demand in the U.S. ticked up 9% in the first quarter compared to the fourth quarter of 2020. But Brown said the company's food-service recovery could lag broader restaurant reopenings since it sold a high proportion of products to big venues like stadiums that are still not at full capacity.

Beyond Meat made several high-profile deals with big restaurant chains in the first quarter. The company inked a three-year deal with McDonald’s that makes it the preferred supplier of the chain’s upcoming McPlant burger. Beyond Meat signed a similar deal with Yum Brands, the parent company of KFC, Pizza Hut and Taco Bell, and it formed a partnership with PepsiCo to co-develop plant-based snacks and drinks.

Because post-pandemic patterns are difficult to predict, the company declined to provide financial guidance for the full year. But it said it expects its second-quarter revenue to increase between 19% and 32% to a range of $135 million to $150 million.

Net revenue per pound of meat sold was down around 5% in the quarter as the company spent more heavily to promote its new burger, which it says has less fat and better flavor than previous versions. It also saw a heavier mix of sales shift to value packs.

Those trends are likely to continue in the second quarter, as Beyond Meat steps up promotions for grilling season.

“There's still a lot of noise out there about the ingredients and things like that, so we want to get out there and be very, very focused on making sure the consumer understands that these products are healthy,” Brown said.

Still, Brown said Beyond Meat wants to stay disciplined and align prices with its costs, even as it strives to achieve price parity with animal protein by 2024. But that discipline could get difficult. Beyond Meat's chief rival, Impossible Foods, slashed suggested retail prices for its products by 20% in February, for example. Walmart now lists Impossible burgers at $7.95 per pound and Beyond Meat burgers at $9.68 per pound.

Brown said Beyond Meat's investment in new plants in Europe and China and production improvements in the U.S. will help bring down costs.