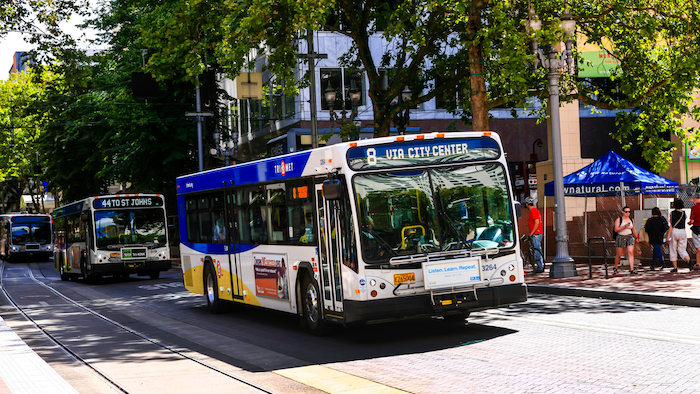 OLYMPIA, Wash. (AP) — More folks from Pacific Northwest government and industry are jumping on the hydrogen bandwagon to test if the alternative fuel could be a viable and green replacement for diesel and gasoline, in some situations.

The potential converts include more than half a dozen transit agencies from Everett to Eugene, state legislators, and Boeing’s drone subsidiary in the Columbia River Gorge, KUOW reported.

A week-long demonstration tour with a hydrogen fuel cell electric bus started at Kitsap Transit last week and is continuing down the Interstate 5 corridor with eight more stops at agencies large and small.

“We’re studying all of these opportunities to try to determine what is the best path for our community here to a cleaner environment,” Ann Freeman-Manzanares, general manager of Intercity Transit, said when the demonstration hydrogen bus stopped in Olympia Thursday.

A hydrogen fuel cell doesn’t burn anything. It uses a chemical reaction between the hydrogen fuel and oxygen from the air to produce electricity to drive a motor. Fuel cell vehicle tailpipes emit only water vapor and warm air.

However, hydrogen fueling is comparatively more expensive than battery electric and diesel bus technology. The advantage is that a hydrogen fuel cell bus can operate much like current diesel buses can, but with zero emissions and without the range limitation and recharging downtime that current battery-powered buses have.

TriMet in Portland has committed to phasing in an all-alternative fuel bus fleet by 2040. So far, its evaluation of options is leaning toward battery electric propulsion. But hydrogen remains on the table for some routes.

“While this technology is not TriMet’s preferred approach at this time, the agency is looking into its long-term potential,” said spokesperson Tia York in an email. “Part of the process includes seeking grant funding for acquisition of test vehicles and associated fueling equipment.”

At Twin Transit in Chehalis, General Manager Joe Clark is awaiting delivery of two electric buses, which he hopes to compare in real world use to two hydrogen fuel cell buses and to conventional buses. Clark said Twin Transit has applied for federal funding to buy the hydrogen-powered models.