Future is cloudy as exports shut down 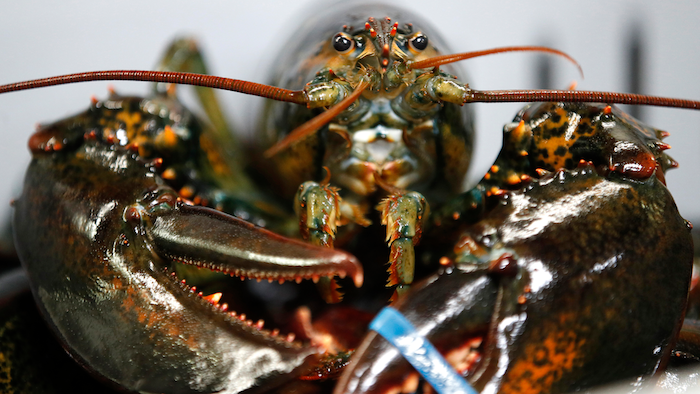 In this Friday, March 13, 2020 photo, a lobster is seen at a packing facility in Kennebunkport, Maine. The worldwide markets for live lobsters have been disrupted by the coronavirus, and members of the industry are concerned it could worsen if the outbreak lingers into the summer. China is one of the biggest importers of lobster in the world, and it isn't taking any of the shellfish right now as it seems to control the spread of the virus.
AP Photo/Robert F. Bukaty

ROCKPORT, Maine (AP) — Lobster prices are tumbling, and shippers fear the worst could be yet to come as the seafood industry deals with a worldwide slowdown in imports because of the coronavirus.

China is one of the biggest buyers in the world for lobsters from the U.S. and Canada, which harvest the same species in the Atlantic Ocean. Europe is also home to major markets, including Italy, which has been hit especially hard by the virus.

Late winter and early spring are already slow seasons for lobster exportation, but they've slowed to a crawl this year, said Bill Bruns, operations manager for The Lobster Co. of Arundel, Maine. The company has already laid off eight of its 15 workers and will face an even harder hit if the lack of exports carries into May and June, he said.

“We have a lot of customers in Hong Kong. They are either taking very small quantities or not at all,” Bruns said. “For the next five, six weeks, it's not looking really good for the state of Maine.”

The inability to export lobster overseas is sending more of the crustaceans into the U.S. market, and that has depressed prices, said John Sackton, an industry analyst and publisher of SeafoodNews.com. The wholesale price for live 1.25-pound lobsters in March is $7.78 — 18% behind last year and 33% behind March 2018, according to statistics from business publisher Urner Barry.

The price reduction hasn't necessarily reached consumers yet, as March is typically an expensive month in which to buy live lobster because of lack of supply. But that could change when the fishing season picks up in the summer, Sackton said.

Concerns about the coronavirus have disrupted supply chains around the world, including other live seafood products, such as Dungeness crabs. Once-reliable foreign markets are inaccessible or less accessible because of attempts to curtail spread of the disease.

For most people, the virus causes only mild or moderate symptoms, such as fever and cough. For some, especially older adults and people with existing health problems, it can cause more severe illness, including pneumonia, and death.

The vast majority of people recover from COVID-19, the disease caused by the virus. According to the World Health Organization, people with mild illness recover in about two weeks, while those with more severe illness may take three to six weeks to recover.

The inability to ship lobsters because of the virus has hit Canada especially hard. Canada shipped more than 30 million pounds of lobster to China in the first six months of 2019 — some 15 times the U.S. total, as Washington had been dealing with trade hostilities with Beijing that hurt exports.

“You have to plan for the future, and the unknown is concerning,” said Jerry Amirault, president of the Lobster Processors Association of New Brunswick and Nova Scotia.

How COVID-19 Will Impact Manufacturers