Surging demand for delivery is pushing sales higher, but it's coming at a cost. 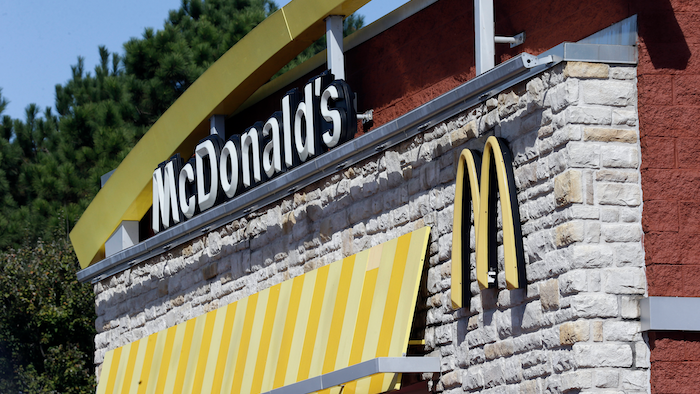 CHICAGO (AP) — Surging demand for delivery is pushing comparable-store sales higher at McDonald's, but it's coming at a cost. Quarterly earnings at the Chicago company were flat at $2.11 per share. Wall Street was looking for per-share earnings of $2.21, according to FactSet.

The company's shares were down four percent in pre-market trading Tuesday. The burger giant said global sales rose 5.9 percent at restaurants open at least 13 months. That was better than the 5.4 percent increase analysts were expecting, according to a survey by FactSet. In the U.S., comp sales were up 4.8 percent.

Just over half of McDonald's Corp. restaurants offer delivery and it's dropping off orders to more than a million customers each day. The company partnered with DoorDash in the quarter to make deliveries in the U.S. But it's been costly to promote those efforts. McDonald's is also undergoing expensive store renovations, in part to have dedicated delivery and mobile ordering spaces.

McDonald's is also investing heavily in new technology to provide faster service. Last month, it acquired a Silicon Valley voice recognition startup called Apprente, with an eye toward using it to take orders at drive-thru windows. And earlier this year it bought Dynamic Yield, a startup that will help it provide customized recommendations at drive-thru windows based on things like weather and restaurant traffic.